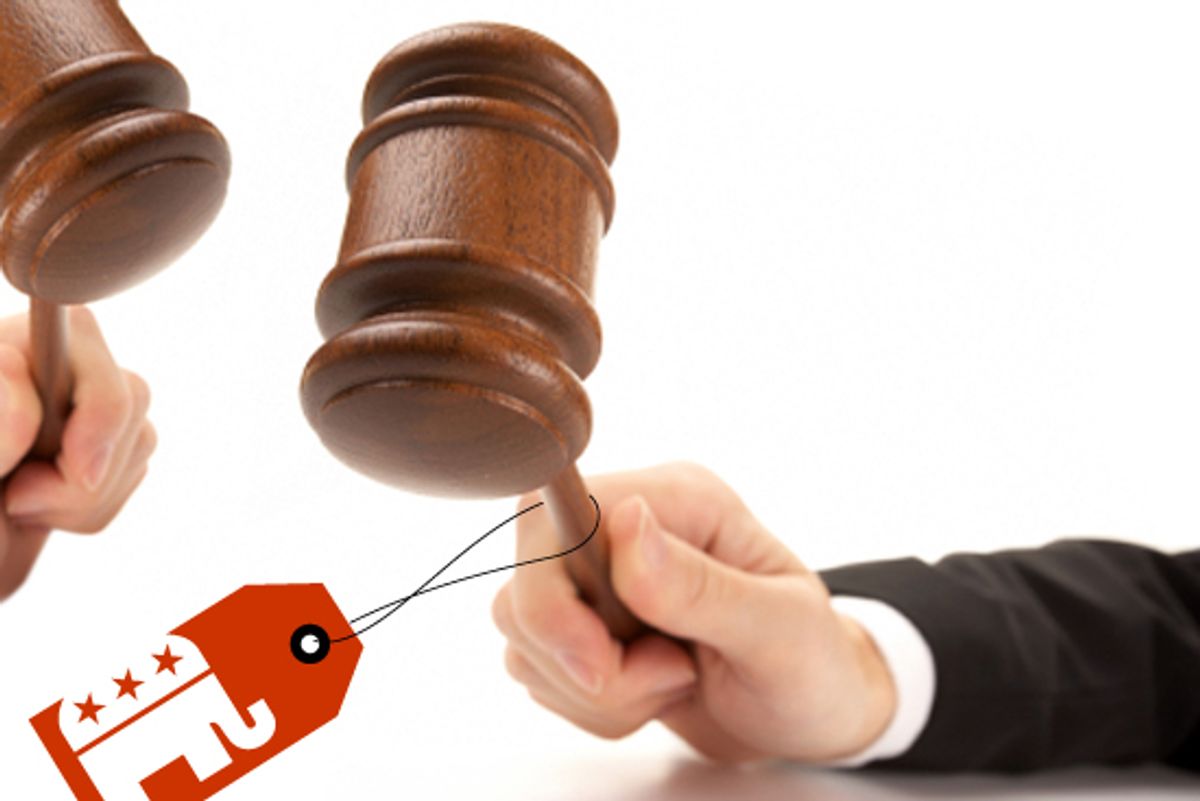 Now that President Obama has tucked away two Supreme Court justices, a greater challenge awaits: fixing a vacancy-driven backlog in the lower federal courts that threatens the speedy and fair administration of justice.

At present, 104 of the 876 federal judgeships -- almost 1 in 8 -- lie vacant. Some openings have persisted for so long and some caseloads have become so unmanageable that the Administrative Office of the U.S. Courts has declared 49 "judicial emergencies." In districts once known as "rocket dockets," civil litigants can expect to wait two to three years before they get a trial. According to Carolyn Lamm, the president of the American Bar Association, the problem is "fast approaching crisis proportion."

The efficiency of the federal courts isn’t an issue that tracks with partisan divisions. Nor does either party have a monopoly on politicizing the confirmation process. Seven years ago, in 2003, it was George W. Bush who complained that a "vacancy crisis" and delays in confirming judges were endangering American justice. Now it's the other way around.

Republicans claim that the Democrats are reaping what they sowed during the Bush years. But if that’s the case, theirs is a vengeance disproportionate and compounded. GOP opposition to Obama's nominees is markedly different in its success rate, its indiscriminateness and the secrecy enshrouding its tactics. Unlike the noisy, targeted "judge wars" of the Bush years, what's transpiring now is a covert campaign of wholesale obstruction.

Here are some startling data points. At this point in his presidency, a Democratic-controlled Senate had confirmed 59 percent of Bush II’s nominees. President Clinton, whose party had a six-vote majority in the Senate, had confirmed 72 percent by his second September in office. But despite enjoying the largest Senate majority since 1977, President Obama has gotten a meager 47 percent of his nominees confirmed -- the lowest rate since Richard Nixon. As a result, the rate of vacancies in the federal judiciary has doubled since he took office. Obama’s confirmation rate is so bad, in fact, that due to retirements, the percentage of Republican-nominated district judges has actually gone up on his watch.

True, Obama's sluggishness is partly to blame -- he has submitted only 85 nominations to Clinton's 116 and Bush II's 122 at this point in their terms. And Republicans have exploited that fact to feign innocence. "We can't confirm what's not there," shrugs Mitch McConnell's spokesman. Apparently they can't confirm most of what's been there for months either.

Nor can they seem to explain why they are rejecting the judges. Agree or disagree with their justifications, Democrats at least told us why they opposed a Bush nominee. (A rare but notable exception was the declaration of Sens. Carl Levin and Debbie Stabenow that they would block Bush's candidates for Michigan's courts due to his refusal to re-submit Clinton-era nominations.) Democrats opposed Miguel Estrada because of his Scalia-esque judicial philosophy, Peter Keslier because he was a Federalist Society co-founder and a Bork acolyte, William Myers because of his anti-environmental views, and so on.

But, with just two exceptions, Republican opposition to Obama's nominees seems to have little to do with their qualifications or ideological temperament. On the contrary, it’s liberals who are grumbling about the president’s moderate picks. The left never generated much enthusiasm for Joseph Greenaway, Alito’s solidly centrist replacement on the Third Circuit. Or Albert Diaz, who spent a decade representing Big Tobacco. Or even David Hamilton, who was recommended by Indiana’s Republican senator and endorsed by the local Federalist Society chapter. Even those credentials didn’t stop the Republicans from filibustering his nomination for five months.

Few cases illustrate the indiscriminate nature of Republican obstructionism better than Obama’s nominee for the Fourth Circuit, Barbara Keenan. After clearing the Judiciary Committee without dissent, her nomination languished for half a year under the threat of a filibuster. When Senate Majority Leader Harry Reid finally filed for cloture and brought Keenan’s nomination to the floor, she was confirmed 99-0. In other words, the very Republicans who maneuvered to block her up-down vote ended up voting for her. This is a story that repeats itself with disturbing regularity. In fact, despite Republican stonewalling that has extended the average confirmation time to an unprecedented five months, all but five of Obama’s 42 successful nominees have been confirmed unanimously.

To date, the Republican leadership has failed to provide any rationale -- apart from political payback -- for the vast majority of nominations they have blocked. Thanks to the secret hold -- a procedural tool that allows any senator to anonymously delay action on a nomination for any (or no) reason -- we don’t even know which senators are holding up the nominees. In 2007, the Senate tried to rein in secret holds by requiring disclosure of the senator’s identity after six days. But Republicans have skirted that rule by "tag teaming," whereby two senators take turns placing holds on the nomination every five days. At present, there are some 130 holds on Obama’s judicial nominees.

The threat that such secretive, arcane parliamentary tricks pose to democratic accountability is plain. When Michigan’s Democratic senators pulled their vindictive stunt in 2003, Michiganders at least knew where to point the finger if the vacancies overwhelmed their courts. But it is near impossible for the citizens of the four-dozen districts with declared judicial emergencies to figure out which politician is responsible. It’s the cryptic and covert nature of these tactics that contributes to the public’s bleary "the system is broken" jeremiad instead of what's truly called for: a targeted ire that should cost a certain band of politicians their jobs.

Instead, Republicans appear poised to make major inroads in November, and there's little reason to expect Obama's nominees will fare any better in the near future. All that's left is to hope that it doesn’t take a full-fledged crisis in the judiciary to convince the Senate Republicans of the need to cooperate with the president in replenishing the federal bench.

Joseph Pace is a recent graduate of Yale Law School and an associate at the D.C.-based litigation boutique, Coburn & Coffman.