The mother of all Tea Party triumphs? 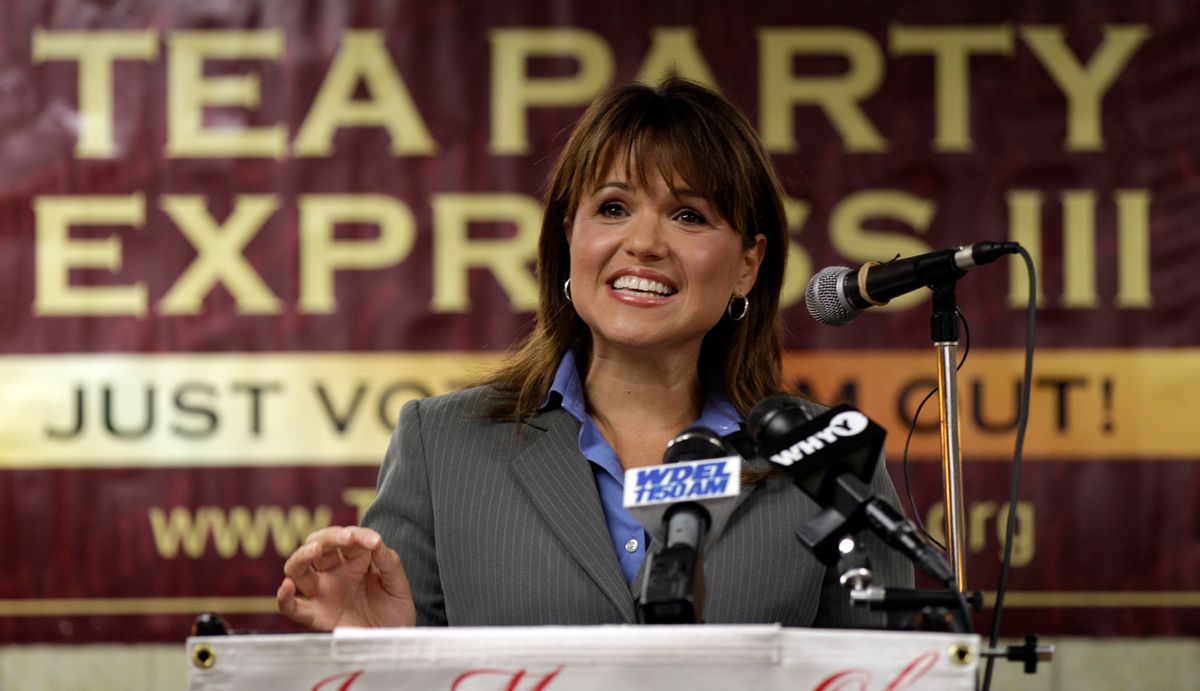 Two realities have increasingly become clear as this year's midterm Senate campaigns have taken shape. One is that enough seats are in play to give Republicans, who didn't even have the numbers to mount a filibuster on their own a year ago, a Senate majority. The other is that the Tea Party movement -- which essentially represents the disgruntled base of the GOP -- has forced enough fringe candidates on the party in enough marginal races to jeopardize the GOP's chances of fully capitalizing on what is a very favorable political climate.

And now, the Republican establishment's Tea Party-induced headaches may be about to get worse -- much, much worse. A stunning new poll released Sunday night finds Christine O'Donnell, a far-right gadfly and chronic debtor who has accused her political opponents of following her home and hiding in the bushes and who has equated lust with adultery, now running three points ahead of Rep. Michael Castle, a nine-term congressman and former two-term governor, in a GOP Senate race that will be settled this Tuesday. O'Donnell, previously known only for waging a series of hopeless, quixotic campaigns, has caught fire in the last few weeks, thanks largely to the Tea Party Express, which has poured money into the state on her behalf, and to a late endorsement from Sarah Palin.

The national implications of an O'Donnell victory on Tuesday would be stark: All of a sudden, a race that Democrats had written off as lost -- even Vice President Joe Biden's son was intimidated out of the race by the moderate Castle and his perceived general election invulnerability -- would be theirs for the taking. Until now, every Senate calculation has listed Delaware as a slam dunk pick-up for the GOP. But O'Donnell would make an absurdly easy mark for Democrat Chris Coons, the county official who entered the race when Beau Biden refused to. In essence, Tuesday's primary is a choice for Republicans between victory and defeat in November -- and they seem to be leaning toward defeat.

O'Donnell's surge is all the more remarkable because Castle and the GOP establishment recognized that it was possible -- and tried to nip it in the bud. The warning bells went off almost as soon as little-known Joe Miller scored a completely unexpected upset in Alaska's Republican primary on August 24, knocking off incumbent Sen. Lisa Murkowski. Miller was aided by a massive infusion of Tea Party Express cash -- about $600,000, big bucks for an Alaska race. Castle recognized that with his impeccable establishment credentials, long service in government, and flexible ideology, he could be vilified by the Tea Partiers just as easily as Murkowski. So he and his establishment allies went to work trying to undermine O'Donnell, playing up her baggage and hoping to convince the GOP base to reject her -- however grudgingly -- in the interest of winning the seat in the fall.

Granted, it's possible that Castle will still survive. O'Donnell's lead in Sunday's poll is a slim three points, 47 to 44 percent, and given the tiny Republican primary universe in Delaware, there's probably a lot of wiggle room in those numbers. And maybe what is now the very real prospect of an O'Donnell win and its November implications will give just enough GOP primary voters cold feet to save Castle. Indeed, even as the PPP poll numbers were being released Sunday, the conservative Weekly Standard was reporting that O'Donnell had filed a $6.95 million gender discrimination and wrongful termination lawsuit against her former employer, a conservative nonprofit organization, in 2005 and that she had falsely claimed to have done master's degree coursework at Princeton University in 2003 -- a late-breaking revelation that could stall her momentum.

What is clear is that if O'Donnell does prevail, it will represent the Tea Party's most destructive (to the GOP) triumph yet.

It may not be their only triumph on Tuesday, though. Another new poll released on Sunday, also from Public Policy polling, finds that Ovide Lamontagne, a grassroots conservative favorite, is now trailing the establishment-backed Kelly Ayotte by just 7 points in New Hampshire's GOP Senate primary. Just a few weeks ago, Lamontagne was stuck in single digits in the four-way race, nearly 40 points behind Ayotte. But the aggressive support of the ardently conservative Union Leader newspaper and an ugly air war between Ayotte and another candidate, Bill Binnie,  has boosted Lamontagne's standing.

If he does win, it won't be as disastrous to the GOP as an O'Donnell victory. Lamontagne's ideology is far to the right, but his resume is a serious one and he knows how to conduct himself in the spotlight. He will be tougher for Democrats to paint as a kook. Still, his ideology haunted him in his last campaign, when he rode a conservative tide to the GOP gubernatorial nomination in 1996 -- only to be pigeonholed as an extremist and beaten handily by Democrat Jeanne Shaheen in the general election.

If Ayotte hangs on, the PPP poll suggests, it will be because she's made some inroads with the Tea Party crowd, which is right now divided evenly between her and Lamontagne. But the momentum is with Lamontagne, and if he does pull it out, his party's November prospects will be shakier than they'd be with Ayotte as the nominee.

The GOP establishment will undoubtedly spend the next two days knocking itself out to prevent upsets in both states, particularly Delaware. Of course, that may end up putting the insurgents over the top.