As the third season comes to an end, Eric's revenge plan takes an unexpected turn 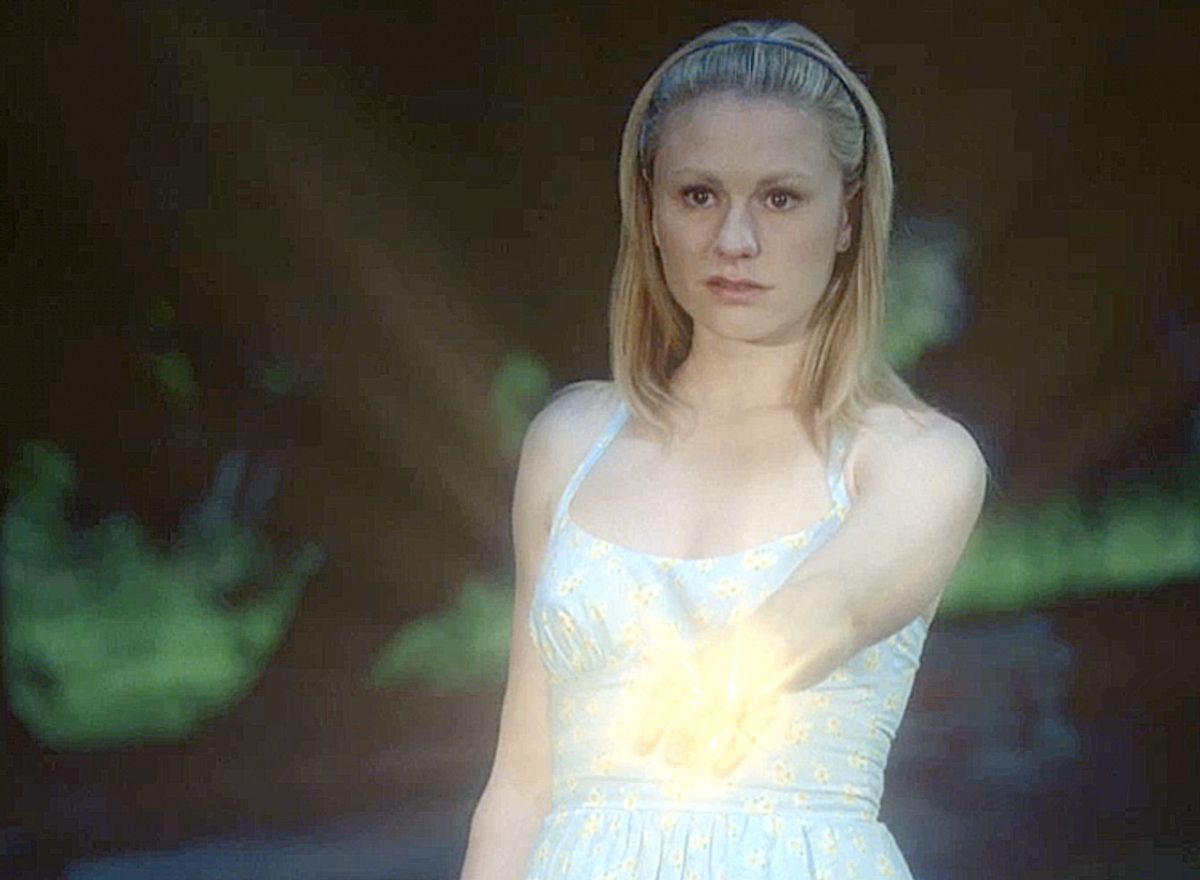 So, here we are at the finale of the most disturbing, violent, possibly nihilistic show on television right now. As we were all expecting, there has been a whole mess of blood, guts, burning and torture. But sadly we must say goodbye to … uh … wait, let me re-check my notes here … Wow, no one, unless you've grown unnaturally fond of Crystal's dad or her weird looking cousin who was caught naked, earlier this season, eating a deer.

As I write this I feel a bit like Terry Bellefleur. A little shell-shocked, but so grateful for the continued aliveness of all "True Blood" creatures who can now continue the good/bad/disturbing/entertaining/sexy fight into season four, be they vampires, wolves, panthers, fairies, or Felix, the armadillo.

This is all thanks to Godric who arrives in the sunny parking lot where Eric and Russell lie prostrate beside Fangtasia's handicapped parking spot. If Godric were merely a vision of Eric's fevered brain, they would probably not be speaking in subtitles. He is here to spoil Eric's big revenge plan with the information that no matter how, or when anyone dies, there's nothing but blessed peace afterwards. Therefore, there's no point to the recurring cycle of violence and Eric should just forgive because all is love.

Needless to say, Eric is upset in that petulant way that Scandinavian prince types tend to be when ghostly father figures show up and try to tell them what to do. Now he must find a way to keep Russell alive to make him suffer, but safely imprison him so he cannot… um… send people to their blessed peace.

The downside of Godric's revelation is that, if it's true, it kind of spoils not just of Eric's plans, but the finales of all television forevermore. The upside is that it gives us carte blanche for an hour of fearlessly macabre television that seems to have mashed my two favorite shows of the summer, "True Blood" and Bravo's "Next Great Artist." Plot-wise the hour is mostly about how to keep Sookie safe now that all the vampires have discovered she is fairy crack/sunblock. Visually, however, the vampire men seem to have been given one day to compete over who can create the best performance/sculpture/corpse.

Russell is riveting with his sun blackened marshmallow skin, tandoori head and silver choke collar. He is endearingly pathetic as he pleads for his life with Sookie, The Vampire Saver, who is delightfully, even sadistically indifferent. Eric is not nearly as visceral with his foundation layer of bubbling BBQ, regenerated with fairy blood, and then re-coated in industrial layers of dust. But he does get bonus marks for process. Especially after he decides to dump Russell in the silver cement time capsule.

"A hundred years! That's like a nap for me!" says Russell valiantly insane to the end. Ostensibly he will have to spend the century grieving Talbot who Sookie has flushed down the garbage disposal with such vicious glee that for a moment it looks like she may be more crazy than anyone. At least we know Russell will eventually work his way free because: Bill, your work of art did not work. On the team project, you uttered the lamest line in the history of television finales since 1867. Yes Russell is "madder than a hatter," but nobody talks like that anymore. Pushing Eric into the cement afterwards was really derivative. I liked, but didn't understand the plastic glove. And also, Eric escaped.

Fortunately this is not an elimination round, and some of us recognize how hard it's been to control your desire for fairy blood all season. But because there is still the unresolved matter of the disturbing, head-twisting sex with Lorena, and the time you almost sucked Sookie dry, and the stripper you dined on, you will be given extra challenges next season.

Really big ones. Because the ancient era of television where characters had the luxury of an entire season to develop a story arc, is now, apparently, over. With the internet, everyone starts masse checking their moral compasses by week three, then panicking if bad actions haven't been punished or immediately recalibrated. Alan Ball must send a clear message of humanist intent to set us rolling in a positive direction for season four.

So first, Sookie must banish you from her life forever, after Eric spills the beans about your job as procurer to Queen Sophie Anne. Then you must spend the summer suspended in air, two seconds away from a pit-bull fight with a very angry, albeit elegant, Sophie Anne, who is very, very angry that you've spared Sookie. Sophie-Anne will probably win, then rip your face off and wear it for the first episode as part of her hat. Maybe she'll keep you scrunched up in a birdcage for a while. If all goes well, towards mid-season, we can start to re-insert you back into the public's heart.

Putting Bill's romance with Sookie on the back burner will, fortunately, allow the show to deal with several other confusing issues. Like what political party/oppressed minority group the vampires are supposed to be. Here's my theory based on the evidence so far this season: none. Nan Flanagan is obviously some kind of lobbyist. And maybe there are some East and West coast vampires who have Republican or Democratic Party affiliations. But because the Vampire Diaspora stretches over every continent and civilization that we know of, they will always be too diverse to label.

My sense of our major character vampires, however, is that they are more like those old feudal wealthy Southern families who have been the real power in the South since the Industrial Age. The ones whose name we don't even know, and yet they own so much land they turn chunks of it into tax-deductible nature reserves under the guise of environmental protection. Their financial political contributions are so well disguised they make the Koch brothers look like, well, the kind of stupid new rich people who actually want their name to be nationally known. It wouldn't surprise me a bit if they're actually funding The Fellowship of The Sun (which now includes Hoyt's mother and Summer) as a way of screwing with The Authority.

Whatever our feudal vampires are up to, we know that in season four there will be blood. And witches. Lafayette is justifiably excited to learn that Jesus is a dude who is not only a nurse, but also a witch. Still, I'm nervous for Laf, since the psi visions he had this episode have all contained seeds of truth. Sam does have blood on his hands and Arlene is still being tortured by the ghost of Rene. So Jesus's hockey-monster head a few weeks back is probably not just a bad trip flashback. And maybe he is schizophrenic and Jesus is just fucking with him. That he shows up at Merlotte's looking like the ghost of Bode from "The Wire" is reason for further concern. I want more for Lafayette next season than just to be one of those little bitches on the chessboard.

There will also be fairies in super cool chandelier spaceships! But, sigh, also more bad fairy fashion wear (I'm sorry fairy men, but white only works for Godric) and cheesy fairy production values. There will be Tara, off to make her fortune with her new Oprah Winfrey haircut. Oh please, God, let her come back as some kind of television talk show host where she can publicly eviscerate white trash fundamentalists.

And there will be some seriously poor hillbillies. To me this was the biggest shocker of the finale. The presence of real, desperate poverty beyond any of the white trash caricatures we've seen so far. For television drama to actually be venturing into the specter of Appalachian social issues is something I certainly didn't see coming. And there was something genuinely moving in seeing Jason forced into the protective role that he's actually good at when the situation demands. "Sometimes the right thing is the wrong thing," he tells a mystified Andy Bellefleur. "And I always do the right thing."

That pretty much sums up the moral message of season three. If Ball manages to pull of a reasonably meaningful treatment of some of the worst problems of life in the American South, the "True Blood" we will be watching next season may be a very different creature from anything any of us could have imagined.