Bill Clinton peeved that Rachel Maddow called him a Republican 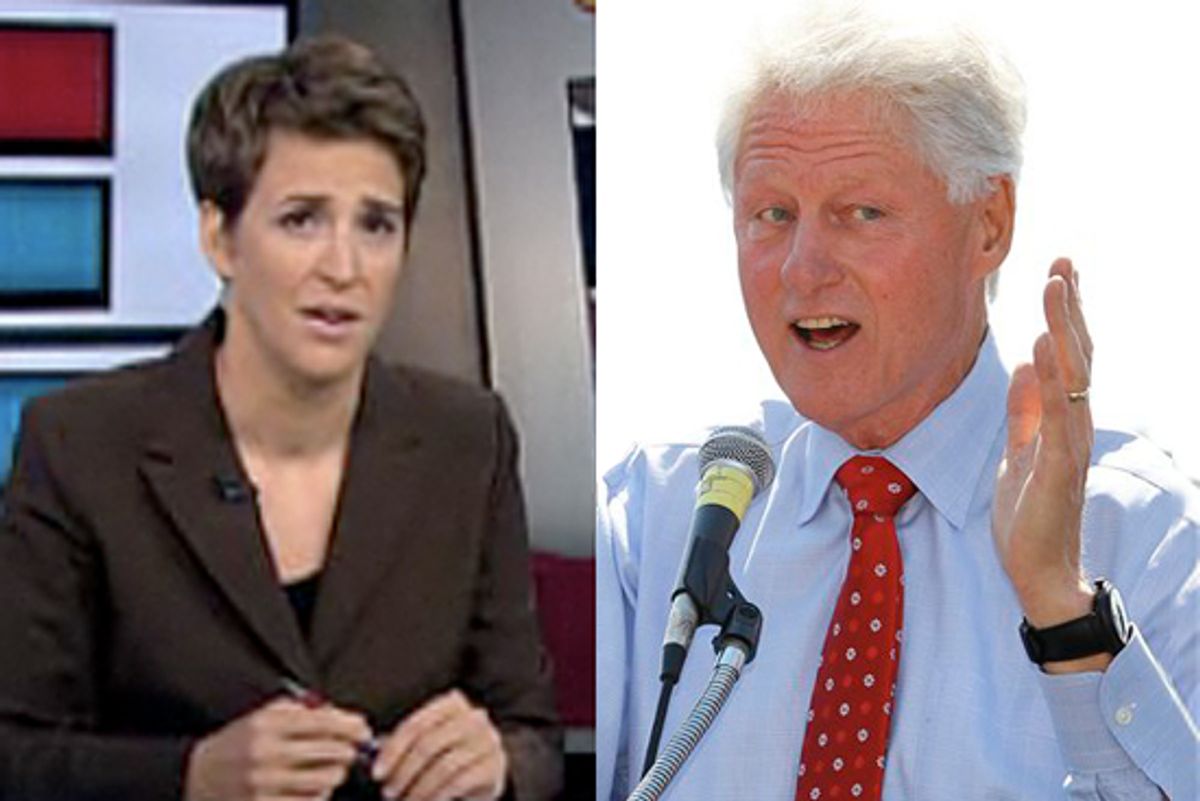 The Democrats, as usual, are still fighting the internecine party battles of the '90s. While Jerry Brown struggles with the 1992 presidential primaries out in California, Bill Clinton is attacking a prominent liberal critic and defending his legacy of triangulation.

At a joint appearance with former British prime minister and warmonger Tony Blair, Clinton complained about MSNBC's Rachel Maddow (without naming her) for, basically, telling the truth about his presidency.

"One of the leading television commentators on one of our liberal cable channels said I was the best Republican president the country ever produced, which would come [as] quite a surprise to the Republicans, half of whom still think I’m a closet communist," Clinton said during an appearance with former British Prime Minister Tony Blair at the National Constitution Center in Philadelphia.

Now this is one statement in an hourlong conversation, and Politico is blowing it out of proportion in order to have a personality-driven "Clinton SLAMS Maddow" story on the front page, but Clinton's actual substantive defense of his presidency, and his prickliness about his liberal critics, is definitely worth getting into.

It is kind of weird that Clinton still gets offended by this kind of talk, considering that the entire point of third-way politics was that if Democrats just became a little bit more like Republicans, voters would like them. But he and Blair bonded over the idiotic political idea that if both sides hate you, you're doing something right. The liberals thought he was a sellout, and the Republicans called him a communist -- that means he was juuuussst right.

Clinton, for some reason, does not take from this the obvious lesson: That no matter how far right you go, the Republicans will still call you a socialist -- and so moving further rightward to head off those attacks is entirely pointless.

Clinton's essential defense of triangulating is that his policies helped the poor and working class more than traditional liberal policies would've. And that's very, very debatable.

Clinton said he accomplished more for the poor and middle class than traditional, New Deal-era liberalism ever could have. He touted his welfare-to-work program, which he said cut the rolls by 60 percent.

“We had 100 times as many people move out of poverty during those eight years [I was president] than the previous 12 years because we had an earned income tax credit, not because we had another traditional anti-poverty program hiring people,” he said.

The EITC is a very nice conservative anti-poverty program that we have Ronald Reagan to thank for -- and it was implemented with the understanding that its existence allowed Republicans to get away with gutting the rest of the welfare state. Little did anyone know that a Democrat would take care of that for them.

Clinton's welfare reform turned out to be a travesty. Welfare reform left the program completely unable to handle a major recession. Crowing about people thrown off the rolls, as Clinton still does, fails to account for whether those people are actually better off.

Stephanie Mencimer just wrote about the failure of welfare reform for Mother Jones this month:

Since the bill was signed, the TANF block grant has lost 27 percent of its value, a budget cut that would have been virtually impossible if the Republicans had proposed it head on. Meanwhile, as Gingrich and Clinton claimed that the block grant would free states from burdensome regulation and allow them to experiment with innovative ways to serve the poor, states spotted a windfall. Welfare reform created perverse incentives to drop poor women from the rolls, especially when state budgets are in trouble. As I highlighted almost two years ago in this story, the state of Georgia dropped nearly 90 percent of the women off its TANF rolls between 2004 and the end of 2007, even as unemployment soared by 30 percent, and then diverted millions of dollars in federal anti-poverty money to other parts of the state budget. Thanks to this, only 18 percent of all children in Georgia living below 50 percent of the poverty line -- that is, on less than $733 a month for a family of three -- were receiving TANF in 2008.

So he really did "end welfare we we know it," and now the man who destroyed a longtime part of the safety net, while enabling the creation of Citigroup, whines that people call him a Republican.

Clinton's third way meant ceding the essential argument over the role (not the size!) of government to conservatives while refusing to offer anyone a compelling reason to support the Democratic Party. It made the Democrats into a party that was occasionally liberal on social issues -- but willing to compromise away the rights of minorities when it suited them -- and uninterested in offering anything more than lip service to the impoverished and the working poor.

His financial deregulation led inexorably to the financial crisis. His booming economy kept middle-class wages stagnant and continued Reagan's long-term project of redistributing wealth to the top 1 percent. He did briefly put the government on a path toward balanced budgets, which is an admirable moderate Republican goal.

Bill Clinton shouldn't go around crowing about dissatisfaction from liberals as if earning their ire is somehow admirable in and of itself.

(Maddow's statement came from a segment that was critical of the Obama administration's tendency to offer policy concessions in exchange for nonexistent Republican support for moderate Democratic proposals. And "best Republican president the country ever had" is honestly pretty complimentary -- I mean, even if you're just counting postwar Republicans, there's still Eisenhower.)