Do I really love my son?

After a few frustrating, sleepless months of fatherhood, I can't shake the feeling there's something wrong with me 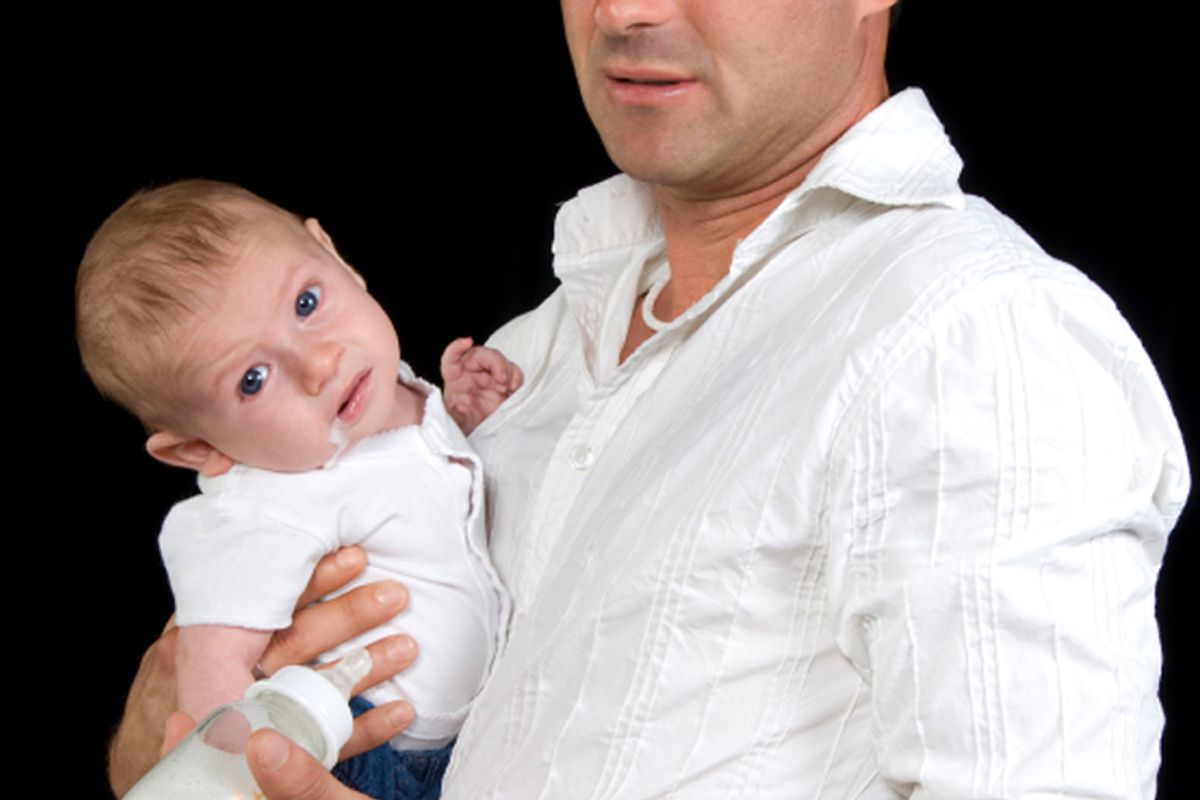 "Don't you just love your baby?"

I'd been a dad for all of two weeks. In that time, I'd experienced the fizzy joy of childbirth, the mucky satisfaction of learning to change wet nappies and the leaden-eyed nights beside my wife, Fitzsimmons, listening to Sam's halting breaths. We were in our third year in San Francisco -- thousands of miles away from my family in Britain -- and we were parents, exhausted but happy. We'd got what we wanted, or so I thought, until this innocent question from Sarah, a Louisianan student at my wife's arts college.

Of course I loved my baby. All parents love their children. You see genetic connections instantly: He's got your eyes, she's got your nose. When Sam choked on his fingers, Fitzsimmons said, "Look, he's just like you." I'd heard a theory that all babies look like their dads in the first few months, evolution's trick to make you love your child. I wanted to, but what was to love in this 8-pound bundle of pee and puke? Worse, he wasn't even a Brit. Since leaving California Pacific Medical Center in March, we hadn't had time to register him with the U.K. Consulate. It was like a low-stakes version of "Rosemary's Baby." Oh no, you've given birth to … an American.

What made Sarah's inquiry more barbed was the knowledge that it wasn't a real question. It was the kind of softball query journalists lobbed to Obama in his first two weeks. "Does the president agree that the United States of America is the greatest country in the world?" Both Sarah and I knew there was only one answer: "Yeah, I love my baby. He's awesome." But that wasn't precise, exactly. Memories of bawling and burping stained my mind; I smelled vomit on my collar. I wanted to ask, "Have you met him?" Instead, I said: "He's OK."

Sarah's face creased into an expression of motherly frustration, a look that said: Oh, you damn Brits, always with the self-deprecation. The irony was that "OK" was what I'd spent nine months hoping. During every ultrasound, every obstetrician visit, every drip of Pitocin and dropping heartbeat of Fitzsimmons' 36-hour labor and emergency C-section, all I wished was for mother and baby to be OK. Should I have asked to love my son as well? I had a lot to learn.

Over the next six weeks, I learned how to give Sam medicine with a syringe in the side of his mouth: Mylicon for gas, Nystatin for yeast, Colic Calm for reflux. I learned how to calm him when agitated, how to bathe him, how to bottle feed. That last battle included six thankless weeks of feeding in the kitchen, the living room, the bathroom, the hallway and the darkened garage. (Sometimes it felt less like childcare and more like a demented game of Clue -- and I knew who'd end up in the ballroom with the rope.)

I learned that my son was afraid of loud noises, crinkly paper and sneezes. He was interested in people, uncomfortable in hot weather, wary in water. He suffered from reflux -- heartburn-causing colic -- so Fitzsimmons ditched anything that might affect her breast milk: soy, tomatoes, nuts, citrus, even dairy. Given his stomach problems, I was cautious of reading too much into his personality. The same applied to myself. My own character was eroding under the endless waves of burping, feeding and changing. Resignation replaced resilience, lethargy love. My last redeeming qualities were abandoning me and I could no longer blame the absence of ice cream. Even my humor decamped, disheartened by the lack of movie nights or hot dates, and lukewarm dinners. I was mean to my wife and resentful of my son. This wasn't the fatherhood I'd hoped for, nor was I the father I'd imagined.

Unfairly, it seemed to me that parenting was a one-way wire transfer of care. Friends told us about the sacrifice -- but this wasn't selflessness, this was fraud. Parenthood was a gigantic Ponzi scheme, each generation leeching love from the one preceding. And everyone but me was in on the scam. "We're so happy to hear your news!" claimed the cards from friends and family. No, you're not. You knew about this. You're glad that we're not sleeping, that we're hissing at each other at 2 in the morning, that our kid has it coming out of both ends. When the UPS man delivered flowers, I thought: Great, I can't even feed my kid. Now I have to keep your chrysanthemums alive?

Five thousand miles from home, we felt loveless and isolated. I reached out to my mum and dad in Britain and told them how I was feeling. "Hang in there," said my mother, "it won't last forever."

My father counseled generosity and fortitude. "God knows I did some shameful things when you were born," he said, "but your girl needs you now."

Right, I said aloud, but thought, Balls to fortitude. Tell me about the shameful things.

While I floundered, Sam flourished. At the 2-month mark he was off the charts for height. Everywhere we went, the bus, the park, the library, people said, "He's a big baby." Everything about him was big: the rocker, the cradle, the crib the size of a golf cart. And the bills. He was going through nappies like tortilla chips. Parenting wasn't care, it was capitalism. How many nursing bras did one woman need? How did our kid outgrow clothes daily? I felt like the Incredible Hulk's tailor.

But mum was right, it didn't last. It wasn't me who changed, though, it was Sam. In months 3 and 4, he reached out for more and carried me with him. His neck muscles developed. He pulled objects into his mouth. He drank milk from the bottle. "That's amazing," said my mother, as Sam and I Skyped during a feed. In my parents' faces I could see something hopeful, even youthful as they watched in a fuzzy, faraway screen their grandson holding a bottle in two hands. It was tilted the wrong way, so no milk flowed into his mouth, but who cares about physics when you've a grip like a Burmese python?

As Fitzsimmons returned to work part-time and I took over the morning childcare, I learned to read his moods, rock him back to sleep at night and, most significantly, get him down for morning naps. Childless adults cannot imagine the satisfaction at being able to put your baby to sleep. Combine the euphoria of learning to ride a bike with the buzz of your first paycheck and you're still not close. Every morning I'd put him in the BabyBjörn sling, read to him for a few minutes, then switch on Rockabye Beatles, a kids CD in which xylophones replaced lyrics. When he fell asleep between "Strawberry Fields" and "Yellow Submarine," I felt like Obi-Wan Kenobi.

Throughout the long months of June and July, Sam and I would leave the apartment before Fitzsimmons awoke, escaping into the early morning mist that hung on the slopes of Russian Hill. San Francisco was beautiful. Pale wood-framed buildings lit by the pinkening sun, Fort Mason a limpid green, the bay an icy blue. Sometimes parakeets would flutter over our heads toward Telegraph Hill. In the evenings, Fitzsimmons would put our son to sleep, then as the sun set beyond the Golden Gate Bridge, the two of us would share dinner, hot. As our horizons expanded, so did the sense that this wasn't just possible, it might even be fun.

As Sam approaches the 6-month mark, we're still struggling: to sleep, to feed, to adjust to his new developments. His sudden puking still reminds me of John Hurt in "Alien." He still wakes up four times a night. And every morning it still hurts Fitzsimmons to leave for work.

But I'm hopeful. Parenting is not simply two steps forward, one step back -- it's also a trip and a stumble, a silly and awkward waltz. My son smiles now when he sees me (poor sod), shrieks with laughter when tickled or when Fitzsimmons jumps up and down. He's growing -- and so am I.

Simon Hodgson was born in Scotland and lives in San Francisco. He is a writer, editor, and dad. He has written for Daddy Dialectic, Education.com, Urban Sprig, NW Kids magazine, and Parent USA City.

Simon Hodgson is a freelance writer living in San Francisco.