Any attempt to avoid a confirmation vote, warns the senator, will lead to retaliation. So? 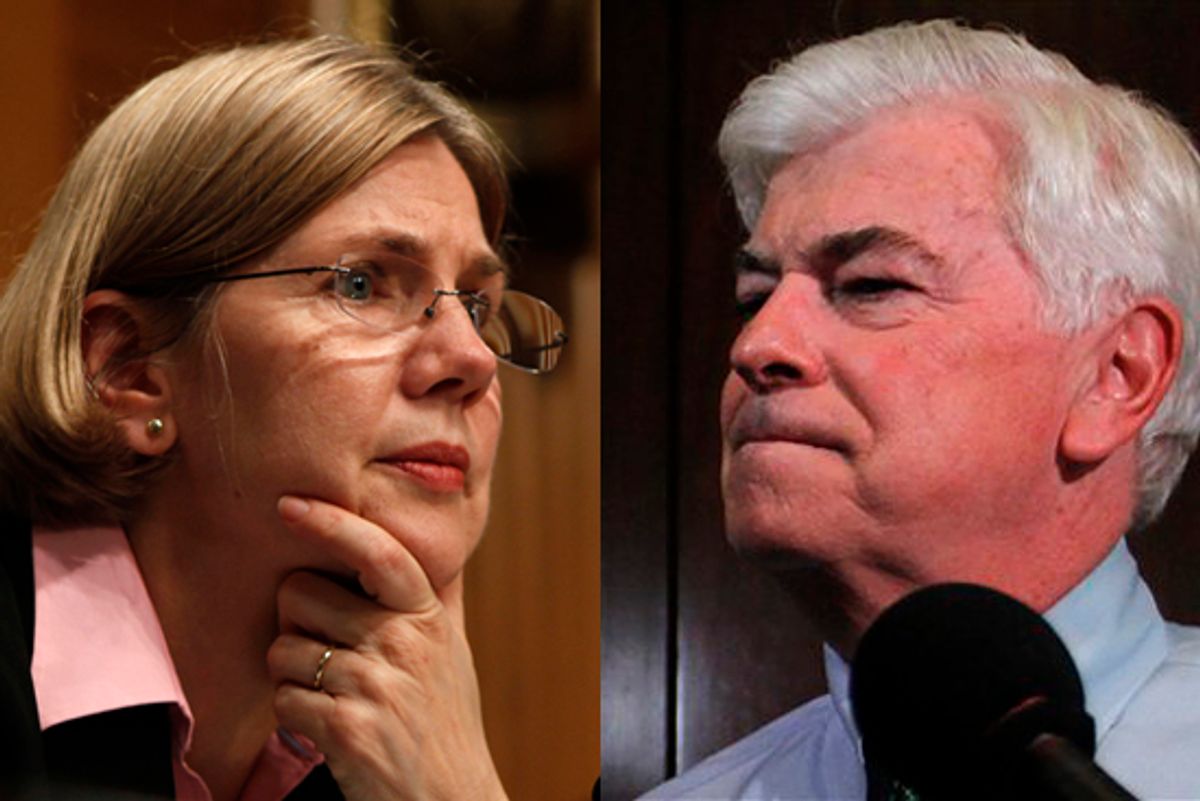 Another day, another Elizabeth Warren puzzler. Ryan Grim reports in the Huffington Post that Sen. Chris Dodd, D-Conn., is warning the Obama administration not to take advantage of a provision of the law that has his name on it to make Elizabeth Warren interim director of the Consumer Protection Financial Bureau without Senate confirmation.

Congress will get mad, Dodd says, if the White House flouts protocol, and will retaliate by defunding the CFPB.

"This is a big job, an important job, and it needs to be -- you've got to build the support for that institutionally or the next Congress -- and none of us know what the outcome's going to be politically -- you could gut this before it even gets off the ground. If you don't have someone running it early on, it jeopardizes the existence of the consumer protection bureau," he said. Asked how Congress would gut it, he said: "Money. Take away the money. That's how you always do it."

However, as Grim points out, the Dodd-Frank Act specifically insulates the CFPB's funding from Congress. No problem, retorts Dodd, who appears not to have a very clear grasp on the details of his own bill -- Congress could change the funding source with an "amendment" and then "kill it."

So let's get this straight. It's been clear for months that Dodd doesn't want Warren anywhere near the CFPB, but in his eagerness to oppose her he is tying himself up in knots. Dodd thinks it is important to get someone running the agency early on, but he doesn't think the administration should take advantage of the part of the law specifically designed to allow the administration to get someone into place quickly. That's silly. But much worse: He waves away the fact that the law protects the agency from congressional fickleness by cavalierly assuming that the law could and would be changed.

Bring. It. On. Personally, I would love to see Congress get so infuriated that Obama would dare appoint the woman who conceived the very idea of the Consumer Financial Protection Bureau to run the agency that it decided to pass another law defunding it. Nothing could better demonstrate the profound dysfunctionality of Congress. But I also can't imagine that it would play well politically at all. If there's one thing the general public knows about Elizabeth Warren, it's that she's on their side. If Congress decides that means she's unfit for the job of protecting the people, Congress is simply begging for a mass pink slip.

And after all that, the Ryan Grim piece closes with a quote from Dodd asserting that if Obama does nominate Warren, "I'll go to bat for them."

I'm sure the White House finds that very reassuring.