The war socialism of the American right 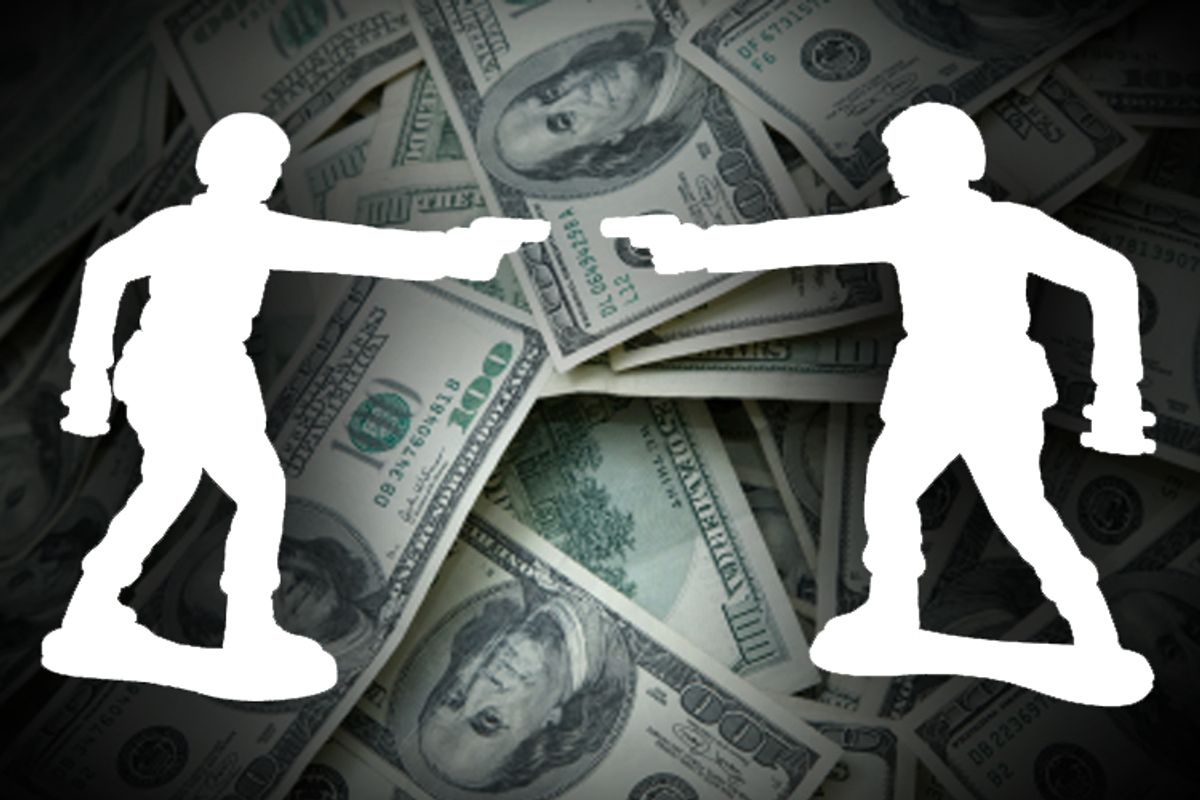 When American conservatives denounce Keynesianism and socialism, it is difficult not to detect a note of jealous resentment on their part. After all, since Reagan, the American right has made Keynesian fiscal policy and the socialization of American industry its own specialty. Conservatives are rhetorical libertarians but operational Keynesians, when they are not operational socialists -- military socialists.

The old Republican Party of Robert Taft and Dwight Eisenhower was a fiscally conservative party of Northeasterners and Midwesterners who favored balanced budgets and viewed foreign wars and military spending with suspicion; recall Eisenhower’s warning about the "military-industrial complex." The Republican Party of Ronald Reagan and his successors is based in the Southern and Western "Gun Belt," whose economy of military contracting and subsidized agriculture and energy was largely created by New Deal Democrats in World War II and the Cold War. The Republican Party seeks a permanent alliance with the Wall Street financial industry, which, however, flirts with neoliberal Democrats like Bill Clinton and Barack Obama.

Both the Wall Street and the red state wings of the GOP depend on right-wing Keynesianism and right-wing socialism, in different forms. Right-wing Keynesianism for Wall Street consists of low interest rates that stimulate speculation and encourage inflation of the assets of the rich, like stocks and bonds. Right-wing socialism for Wall Street consists of "too big to fail" policies, which guarantee that over-leveraged financiers can keep their profits, while any losses will be socialized and paid for by the public.

If the Wall Street wing of the GOP is factored out, the red-state Republican economy is the military-industrial complex -- or, to be more specific, the agro-energy-military-industrial complex. As the political heirs of the right-wing Southern Democrats of the 1940s and 1950s, today’s red-state Republicans have inherited the old Southern Democratic trick of combining denunciations of big government with support for federal government spending that benefits their constituents. Those constituents include not only well-paid military contractors, who for all practical purposes are government bureaucrats in a socialist economy, but also ordinary men and women in the ranks, where conservative white Southerners are over-represented.

If you are a right-wing white Southern Republican, you can spend your entire life as a ward of the state. You can serve in the socialist economy of the military and then, as a retired officer, you can go to work for a semi-socialist major defense contractor. Both in your active-duty career, your career in the pseudo-private defense contractor sector and your retirement, you will be one of the privileged Americans who enjoy a system of socialized, single-payer healthcare -- the Veterans Administration. And throughout your career as a state functionary in the socialist military sector, you can grumble about big government and denounce liberals who don’t understand private enterprise. If this is Orwellian Doublethink, it is no different from that of progressives who vote for candidates who promise a new New Deal and then attack middle-class entitlements, govern on behalf of Wall Street and support multinationals that seek to offshore even more industrial jobs.

Indeed, while progressives talk endlessly about protecting American industry, conservatives actually do it -- as long as the industry is military. As Floyd Norris pointed out in a story for the New York Times (chart here), between 2000-2009 military manufacturing increased by nearly 125 percent, while civilian manufacturing contracted by roughly 25 percent. The military, which was responsible for only 3 percent of durable goods orders in 2000, grew to account for 8 percent in 2008, before the crash.

Military Keynesianism includes infrastructure spending. To be sure, the infrastructure is in countries that the U.S. has bombed into chaos like Iraq and Afghanistan, but building foreign infrastructure generates contracts for American firms like Halliburton. Conspiracy theorists to the contrary, the Iraq and Afghan wars were motivated by misguided conservative strategy, not by rewards to contractors, but those rewards are real nonetheless.

Few conservative Republicans confess to their policy of military Keynesianism. As long as they are out of power, Republicans theatrically pose as fiscally conservative enemies of big government. If the GOP recaptured Congress or the presidency, however, Ron Paul would be locked in the attic again and Paul Ryan’s plans for downsizing the federal government would be shelved in a locked cabinet in one of those secret government warehouses depicted in "The X-Files" while even more money was shoveled at the Pentagon.

Martin Feldstein has given the game away. Feldstein, now a professor at Harvard, was the chairman of President Reagan’s Council of Economic Advisers. For the last few years, he has been campaigning to raise defense spending to 6 percent of GDP a year (it is now 4.7 percent of GDP and reached a low of 3.0 percent in 1999-2000, after the Cold War and before 9/11). In his articles and Op-Eds, Feldstein makes minimal and unconvincing attempts to justify defense spending in terms of actual threats -- jihadists, Iran, North Korea, Russia, China, whatever. It is clear that he is chiefly interested in military Keynesianism for its macroeconomic results.

In December 2008, Feldstein called for a massive Keynesian stimulus in the form of defense spending. He denounced fiscal conservatives who called for cutting spending during the recession:

A temporary rise in DOD spending on supplies, equipment and manpower should be a significant part of that increase in overall government outlays. The same applies to the Department of Homeland Security, to the FBI, and to other parts of the national intelligence community.

…A 10% increase in defense outlays for procurement and for research would contribute about $20 billion a year to the overall stimulus budget. A 5% rise in spending on operations and maintenance would add an additional $10 billion. That spending could create about 300,000 additional jobs. And raising the military's annual recruitment goal by 15% would provide jobs for an additional 30,000 young men and women in the first year.

…Military procurement has the further advantage that almost all of the equipment and supplies that the military buys is made in the United States, creating demand and jobs here at home.

Even before the Great Recession began, Feldstein was campaigning for defense spending at levels near those of the Cold War. In an essay for Foreign Affairs in 2007, Feldstein wrote: "Defense spending rose rapidly during the presidency of Ronald Reagan, rising to 6 percent of GDP by 1986 -- a trend that helped to bring about the collapse of the Soviet Union ... [I]t is useful to consider the 6 percent target achieved during the Reagan years as a spending target."

An obvious question is: Why stop with the Cold War? Most economists agree that U.S. military spending during World War II pulled the U.S. out of the Great Depression. In 1944, mostly military federal spending was 37.8 percent of GDP. If military spending works such wonders, why not devote 40 percent of the economy to it, and not just 6? If military Keynesianism is considered such a success by conservatives, they can hardly balk at what the Prussian military, during World War I, called "war socialism."

The logic of military Keynesianism may explain why the same conservatives who denounce allegedly wasteful civilian stimulus spending are silent about the cost overruns in the military sector. R.L. Schreadley, a retired Navy commander, asks:

Is it credible to spend a billion dollars for one destroyer? Fifteen billion (or more) for an aircraft carrier? Multi-millions for one fighter plane? No, it is not. Nor is it credible for the sea service to have two or more admirals for every ship in the fleet.

From the perspective of military Keynesianism, such costs appear to be acceptable if they stimulate the economy and provide contracts or employment for Republican voters and donors. The fact that healthcare costs have been growing faster than the economy as a whole is treated as cause for alarm. And yet here is Feldstein in 2006, calling for defense spending to rise faster than economic growth: "Increasing defense spending at a faster rate than the rate of GDP growth requires raising the share of GDP devoted to defense."

In that same speech at West Point, Feldstein told a largely military audience that the money for military Keynesianism could come from cuts in Social Security and Medicare programs for elderly Americans:

The final hurdle to increased defense spending will be the effect of the population aging on the cost of Social Security and Medicare ... That’s one more good reason, in my judgment, to focus on transforming the current pure tax-financed, pay-as-you-go systems for financing Social Security and Medicare to a mixed system that combines a tax-financed basic program with individual investment-based accounts in a way that can avoid that tax increase.

Undoubtedly, many of the military personnel in Feldstein’s audience nodded in agreement. The soldiers, after all, have generous military pensions and the Veterans Administration to provide their socialized healthcare in their old age.

The U.S. economy increasingly resembles the dual economy of the Soviet Union, with an overfunded military sector and a chronically weak, dysfunctional civilian sector. Like the Soviet Union in its decline, we are bogged down in an unwinnable conflict in Afghanistan. The Soviet system was supported to the end, however, by Soviet military and intelligence personnel and defense factory workers and managers. Their equivalents exist in America. Conservatives are not being irrational, when they ignore the civilian economy while fostering the military economy that provides orders and jobs to many of their constituents. Theirs is the logic of Soviet-style conservatism.

"Watch what we say, not what we do," Richard Nixon’s Attorney General John Mitchell famously remarked. Out of power, the Republican Party preaches Ron Paul-style libertarianism. In power, the party practices Martin Feldstein-style military Keynesianism and military socialism -- and Hank Paulson-style financial sector Keynesianism and socialism.

During the 2008 campaign, Republican presidential candidate Mitt Romney not only opposed closing Guantánamo but called for even more Guantánamos. Think of all the jobs that would be created.