Brace yourself for "Obama might not run in '12" stories

Politico suggests Obama might pack it in after a tough midterm election. Where have we heard this before? 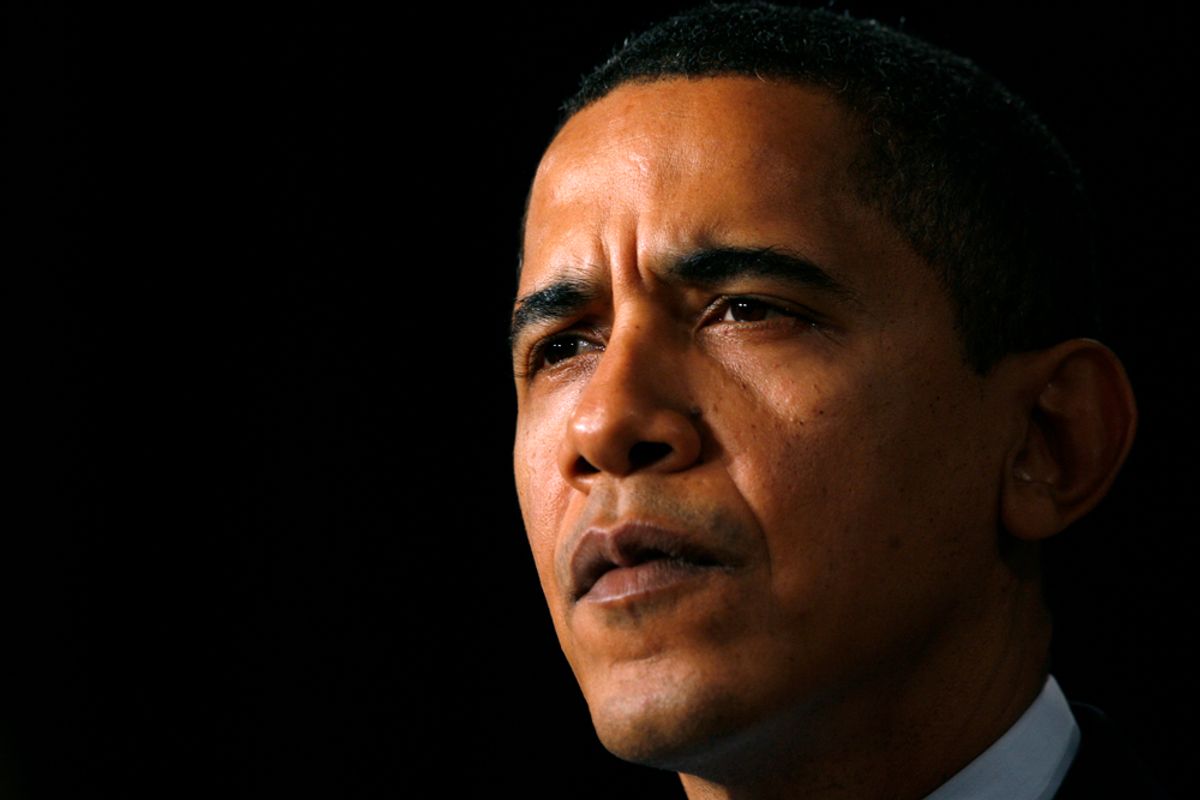 U.S. President Barack Obama takes a question at the Fiscal Responsibility Summit at the White House in Washington February 23, 2009. President Obama pledged on Monday to cut the ballooning U.S. budget deficit by half in the next four years and said the country would face another economic crisis if it did not address its debt problems soon. Obama, whose month-old administration has pushed through a $787 billion economic stimulus package to try to jolt the country out of recession, said the need for spending now did not mean U.S. budget problems could be put off. REUTERS/Kevin Lamarque (UNITED STATES) (Â© Kevin Lamarque / Reuters)
--

Politico's Roger Simon has a new column that serves as a useful preview of the inane commentary we will likely be flooded with after November's election.

The basic idea: A "big-time Democrat" who has "hardly ever been wrong" tells Simon that the 2010 election is a lost cause for Barack Obama and the Democrats and that it's time for the president to start worrying about how to save himself and his party in 2012. "But the biggest fear of some of those close to him," this unnamed Democrat adds, "is that he might not really want to go on in 2012, that he might not really care."

Pardon my skepticism here, but maybe I'd take Simon's piece a little more seriously if it weren't so easy to see coming. But it is the result of the panicky thinking that has long accompanied weak presidential approval ratings and rough midterm elections.

We saw the exact same thing with each of the last two presidents to face Obama-like poll numbers in their midterm years. Both Ronald Reagan and Bill Clinton tried desperately to contain the damage in midterm elections, both found they were powerless to do so, and both faced intense post-election speculation about whether they'd even bother to run for reelection two years later (and, if they went ahead and did so, whether they'd face a primary challenge).

Here, for instance, was the forecast of one longtime Democratic establishment figure after the 1994 midterms, when Clinton's party lost both the House and the Senate:

"The president will come under increasing pressure early in 1995 to declare that he is not a candidate for re-election. At first thought, President Clinton is almost certain to reject such a notion as being inconsistent with his off-the-floor, Comeback Kid persona. But as he considers the unpleasant alternatives, he will take it seriously."

Or, as George Will put it shortly after the '94 vote:

"And speaking of recycling ideas, some Democrats dream of Clinton emulating in 1996 Truman's 1948 run against the 'do-nothing 80th Congress.' But there are three problems. First, Truman was Trumanesque; Clinton would be pretending. Second, Truman rallied liberals and labor when they were formidable and when government enjoyed unnatural prestige as organizer of the victory in war. Third, the 104th Congress will not do nothing."

Of course, they had plenty of reason to say these things. Polls showed Clinton's approval rating slipping under 40 percent. In one survey, two-thirds of Democrats said they wanted to see him challenged in the 1996 primaries. Names of potential challengers -- Paul Tsongas, Bill Bradley, Jesse Jackson, Bob Kerrey -- were widely circulated. As the New York Times' R.W. Apple wrote that December, there was one question "on the lips and in the minds of prominent Democrats across the country: Can Bill Clinton -- should Bill Clinton -- be the party's presidential nominee in 1996?"

Clinton, of course, went on to win renomination in 1996 without an opponent and to coast to a general election victory over Bob Dole. That campaign is most notable for how uneventful it was: Clinton led wire to wire (even in the immediate wake of the GOP convention, when Dole got his only polling bounce of the race).

The story was the same for Reagan after the '82 midterms, when his party lost 26 House seats. (That number may not seem huge, but remember that the GOP only had 191 seats to start with in that campaign; the 26 lost essentially represented every seat gained by the GOP in Reagan's 1980 landslide.) He, too, faced a torrent of media speculation -- much of it stoked by members of his own party -- over whether he'd run for reelection. And he, too, was renominated without a fight and won the 1984 general election in a 49-state rout.

The point here isn't that Obama is destined to enjoy the same revival that Reagan and Clinton did in the second half of their first terms. The economy will decide whether he does. But the Clinton and Reagan examples do show us how disconnected a midterm election environment can be -- and usually is -- from a presidential election environment. And yet, pundits and political pros in both parties never seem quite aware of this; whatever the political climate of the moment is, they tend to treat it like a permanent (or, at least, very long-term) condition. You can go back to 1994 and 1982 and find plenty of "big-time Democrats" and "big-time Republicans" who were eager to provide columnists like Simon with panicky, sky-is-falling quotes about how everything was ruined for their party. It made for good copy back then, but looking back today, they all sound like shortsighted fools.