Pragmatism and the Tea Party: An impossible mix? 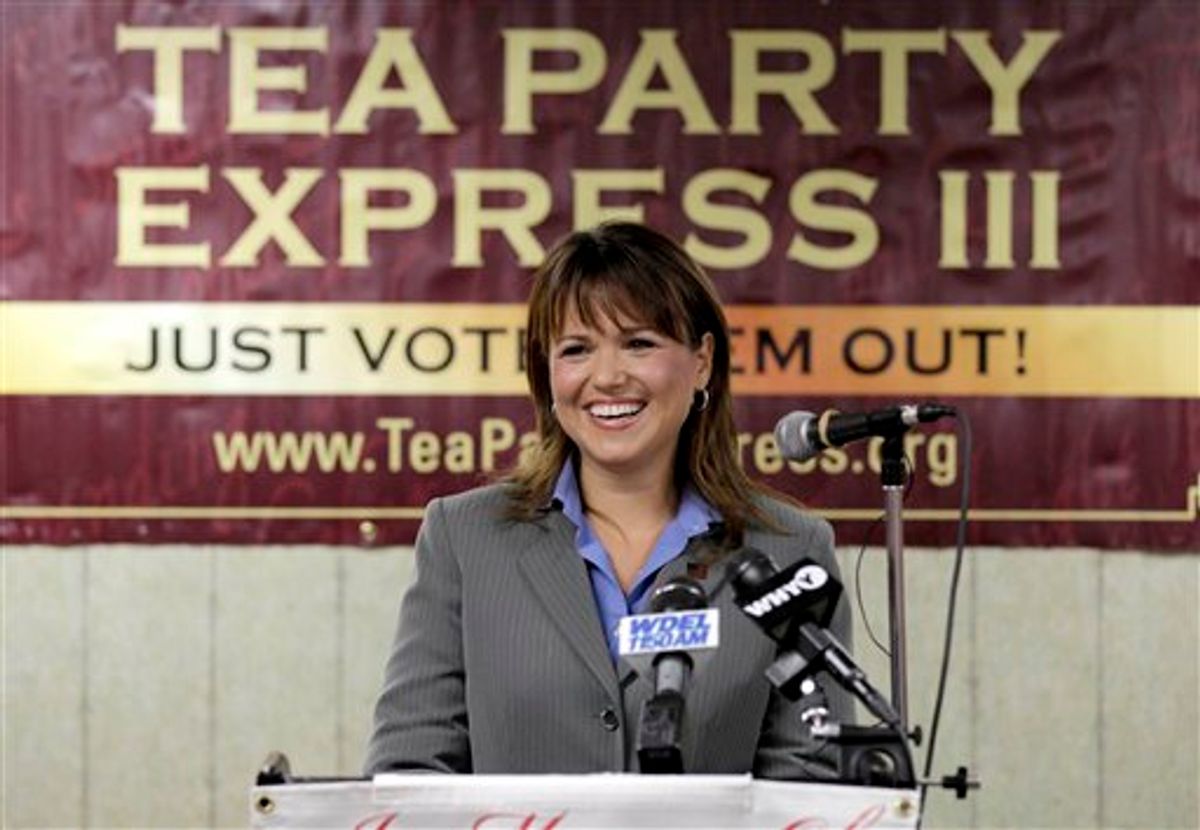 Delaware Republican Senate candidate Christine O'Donnell, addresses supporters during a Tea Party Express news conference in support of her election bid, in Wilmington, Del., in this photo taken Tuesday, Sept. 7, 2010. O'Donnell line kicks with her tea party backers, who hope this display of irrational exuberance translates into votes in Tuesday, Senate primary. She faces the full force of the Republican establishment in her bid to seize the nomination from Rep. Mike Castle, R-Del. (AP Photo/Rob Carr) (AP)
--

There is always some tension in primaries between pragmatism and ideology, but it's almost never as pronounced as it is in today's Republican Senate contest in Delaware.

The race between Christine O'Donnell, a far-right ideologue and with the backing of the Tea Party Express (and Sarah Palin and Jim DeMint), and Mike Castle, an establishment pillar who embodies the bipartisan "consensus" that has governed the state for decades, is dead even. But their general election prospects couldn't be farther apart. With Castle, Republicans would essentially be assured of winning in the fall, claiming a Senate seat that has been in Democratic hands for 38 years. With O'Donnell, they will lose. Public Policy Polling says that Castle is running 26 points better than O'Donnell against Chris Coons, the county official and presumed Democratic nominee.

In other GOP primaries this year, the Tea Party crowd has been able to rationalize away concerns about the general election viability of its preferred candidates. So what, for instance, if Marco Rubio wasn't (initially) polling as well against Kendrick Meek as Charlie Crist? Rubio had some serious credentials (former state House speaker) and strong communication skills. He wouldn't be the same slam-dunk as Crist, but he was certainly capable of winning. And sure, Sharron Angle was the Republican Harry Reid most wanted to face -- but take a look at Reid's own poll numbers. Anyone with an R after his or her name could beat him, so why not nominate a true believer? (Plus, Angle's two GOP primary foes both seemed like potential general election train-wrecks themselves, for non-ideological reasons.) And so on.

But the Tea Party can't delude itself in Delaware. No rational argument can be made that O'Donnell, a serial debtor with a paranoid streak who until now has been a gadfly (at best) in state politics, is capable of winning in November. Her problem is not just that she is ideologically out of step with Delaware (although that is a problem), it's that her own personal baggage makes it painfully easy to caricature her as a lunatic. This is not Alaska or Utah, deeply red states where the GOP can get away with nominating just about anyone to run for the Senate this year. If the GOP nominates O'Donnell, they will lose --badly. And a loss in Delaware will make it next to impossible for Republicans to win back the Senate.

The party establishment knows this, of course, and so do plenty of conservative leaders. This is why The Weekly Standard unloaded on O'Donnell over the weekend, why Mark Hemingway invoked William F. Buckley to plead Castle's case, and why a "prominent Republican money man" is circulating an email that calls O'Donnell a "horrifying" candidate who "will lose the seat."

But will primary voters heed these warnings? It's Castle's only hope. In this sense, the stunning poll released Sunday night, which showed O'Donnell taking a three-point lead, was actually very good news for Castle, a warning siren to conservative leaders who care about winning back the Senate. There has been an urgency and intensity to the right's anti-O'Donnell effort these past two days that would have been absent without that poll -- urgency and intensity which could be just enough to arrest and reverse O'Donnell's momentum.

Oddly enough, a parallel can be drawn to the final days of the 1976 presidential race. On the weekend before the vote, Gerald Ford, who had once trailed Jimmy Carter by 33 points, actually moved into the lead for the first time. Until that point, the prevailing assumption had been that Ford's was a lost cause. But all of a sudden, the prospect that he might actually win and serve as president for another four years became real. If you ask veterans of the Ford campaign, this is where they lost the race, with voters reflecting on the sudden possibility of a Ford victory and asking themselves, "Wait, do we really want to stick with the guy who pardoned Nixon?" Carter pulled back ahead and won by two points.

It may be, then, that O'Donnell peaked too soon -- that the suddenly real prospect of her winning has prompted just enough primary voters to think twice, hold their noses and cast their ballots for Castle.

Of course, it's also possible that all of the frantic warnings from GOP leaders will fall on deaf ears (or even stir a backlash) and that O'Donnell's momentum will carry over to today's vote. After all, voters are people and people are guided by emotion much more than logic and pragmatism.

Faced with the fresh evidence of his opponent's surge yesterday, Castle attempted to frame the race as a referendum on the "out-of-state operation" that is pushing O'Donnell. Tying your opponent to outsiders who are meddling in state politics seems like a good strategy -- until you remember that the last embattled GOP Senate candidate to rely on it was Utah Sen. Bob Bennett. And it didn't stop the Tea Party from throwing him out back in May.