Can anyone win the tax cut showdown?

The White House says the GOP is in disarray. But Dems are definitely confused. This mess will go past Election Day 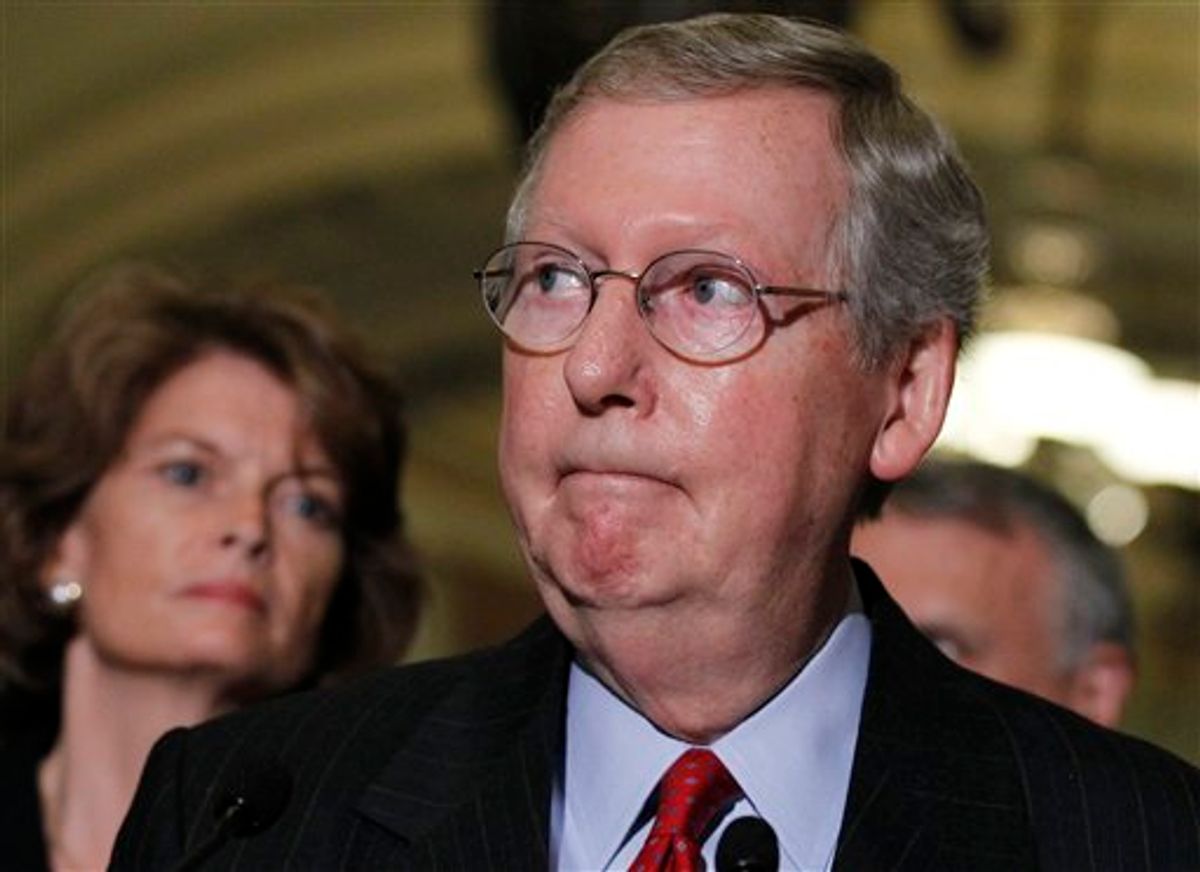 Poor John Boehner. Whether he meant it or not, the House Minority Leader's apparent concession on Sunday that, if faced with no other alternative, he would vote for extending middle class tax cuts without keeping cuts for the wealthy in place, spawned hooting from the White House and an uproar from his own party. Watching the Republican leadership in both the Senate and the House scramble away from the heresy that they would in any way, shape or form countenance a tax hike on the richest Americans would have been amusing if it wasn't so predictable.

Mitch McConnell, R-Ky., went so far as to introduce a bill extending all the Bush tax cuts, expanding estate tax breaks and providing extra relief for Amerians facing the alternative minimum tax burden. (Which party, again, is worried about the deficit?) But McConnell's bill will go nowhere, because Senate Republicans don't have the power to actually move legislation -- only to stop it. In the House, a parade of prominent GOPers -- including Eric Cantor, Mike Pence, and Paul Ryan -- all renounced Boehner's shocking betrayal of Republican values. If Republicans do retake the House in November, Boehner's chances of become speaker may have just taken a big hit.

But what does it all mean for the tax cuts? The key factor that makes this legislative fight different than all the others during Obama's first two years as president is the paradox that if no action is taken, something actually happens: the Bush tax cuts expire for everyone. This presents Democrats with a golden opportunity: Harry Reid and Nancy Pelosi can introduce bills that would extend just the middle class tax cuts, and force Republicans to vote against continued tax relief for the majority of Americans.

That's what the White House wants, and President Obama has been consistently pushing exactly such a line of action for two weeks. With polls showing that a significant majority of Americans support raising taxes on the rich, the White House would appear to have exactly the kind of issue it needs to boost voter enthusiasm for Democrats as the midterms approach.

But it's not at all clear that either the Senate or House will fall into line. Democrats appear to be in more disarray on this issue than Republicans. Four Democratic Senators and Joe Lieberman are on record as opposing a tax hike. Nebraska's Ben Nelson has even hinted that he would support a Republican filibuster. In the House, Blue Dog Democrats are begging Pelosi not to schedule a vote. Their political calculus is equally simple -- in their conservative districts, they expect to be hammered by a Republican mantra: You don't raise taxes in a recession.

The Republican position surely resonates with some voters, though apparently not the majority. While policy wonks can and will argue that cutting taxes on the rich doesn't give you much economy-juicing bang for the buck, or, more fundamentally, that the evidence for supply-side economics is very weak, or that only 3 percent of American small business owners will be affected by the end of tax cuts for the wealthy, those arguments don't carry the same visceral punch as the simple declaration that it is wrong to raise taxes when the economy is slumping -- even if, for Republicans, it is always wrong to raise taxes.

Gaming out how this will unfold is tricky -- and a lot depends on how much pressure the White House can exert on Democrats who are running scared. For Obama, success will probably be measured by its ability to force a vote on a middle class tax cut, or at the very least, force a filibuster vote in the Senate. But if gets that far, my guess is it will get no farther. Republicans will filibuster.

If Democrats respond to Republican intransigence by cutting any kind of compromise before the election that keeps tax cuts for the wealthy in place, even for just a year, they lose. So the most likely scenario is that nothing happens until after the election, and success, for Democrats, is measured by whether they can minimize electoral losses by taking a clear populist stand against keeping taxes low for the wealthiest Americans at a time when government finances are stretched beyond the breaking point. Success, for Republicans, is steamrolling the midterm elections regardless of what Democrats do.

At least, that's what it looks like Tuesday morning. By Tuesday afternoon, the calculus could be completely different!

2010 Elections How The World Works Taxes