Two ways of looking at TSA

Yes, the concourse screeners sometimes drive us nuts, but there are signs of intelligent life behind the scenes 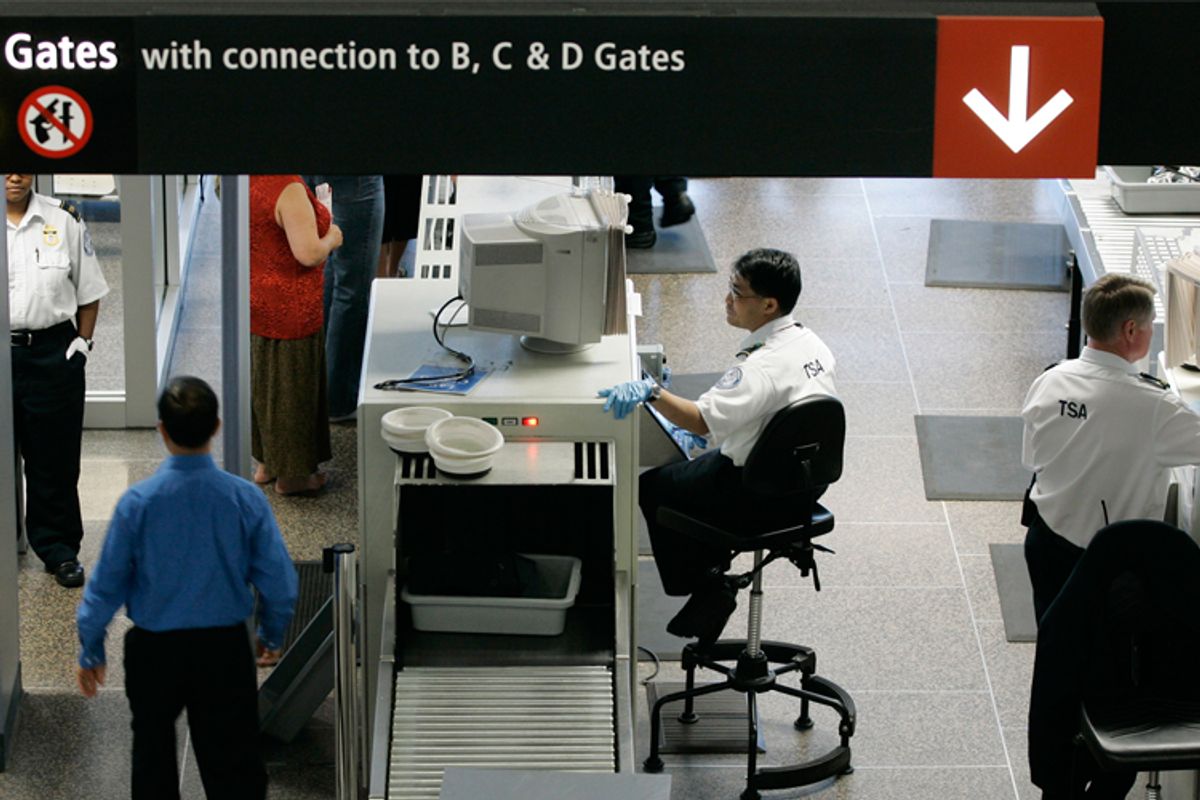 The other day I was riding the subway out to Logan Airport. A Transportation Security Administration guard was also on the train, and I got to looking at his uniform. The TSA emblem, if you haven't seen it, is a circular thing with an American flag backdrop and a sort of petrified, puffed-out eagle. The guard had one of these on his left shoulder.

Around the ugly eagle were three words, and I peered in to read them. The results were even more banal than I expected. It said: "integrity, team spirit, innovation."

That last one is the only one of substance, potentially. "Integrity" is generic and meaningless. "Team spirit"?

Pardon me for taking this so seriously, but why is TSA's motto about them, and not about us, the people whose safety they are entrusted with? Should it not reflect the mission, rather than the way the agency feels, or wants to feel, about itself? I'm thinking along the lines of the old "to protect and to serve" of the LAPD.

As it stands, and depending on how you read it, TSA's annoying choice of words seems a touch hostile and confrontational.

Then again, judging from the behavior of many concourse screeners, maybe those are the words -- "hostility" and "confrontation" -- that ought to be sewn onto the emblem. You could put "touching" on there too, maybe. A friend of mine swears she was groped recently by an overzealous screener during a pat-down, echoing similar allegations made by hundreds of other travelers.

Now, having gotten that off my chest, allow me to break with tradition and say something positive about TSA.

I was in Africa a few weeks ago and had a rather encouraging conversation with one of the TSA bigwigs there, whose team is in charge of assessing and certifying African airports so that U.S. carriers can operate there safely. It is better if I don't say his name or reveal any specifics, but I was impressed and surprised by much of what he told me. The biggest criminal threat to commercial aircraft overseas is essentially the same thing it has been for several decades: the smuggling aboard of bombs and explosives, be it in carry-on bags or, more worryingly, in checked luggage. I have been writing -- warning, if you will -- about this for years. Watching the typical concourse charade, and its silly fixation on pocket knives and toothpaste, it's easy to think that TSA has blinded itself to a dangerous reality and in doing so put all of us at greater risk. In fact, there are intelligent and resourceful people at TSA who know exactly what the threats are and exactly what they are doing. This is true, as well, for the corporate security experts working at and for the major airlines, a few of whom I also spoke to recently. For carriers, remember, the stakes are huge and the liabilities enormous.

For reasons that are perhaps obvious, most of what these people do goes on behind the scenes; we don't see or hear about it. While we can never be fully protected -- something even the most confident security specialist is quick to acknowledge -- we're safer for their efforts.

No, none of this is an excuse for the foolishness we see on the concourse. And when I got to this subject with the TSA man in Africa, he nodded, winced a little, and measured his words carefully. "It's partly about perception," he said. "The American people want to see that we're doing something."