Beau and Joe must be kicking themselves

So much for the V.P.'s grand plan of having his son claim his Senate seat someday 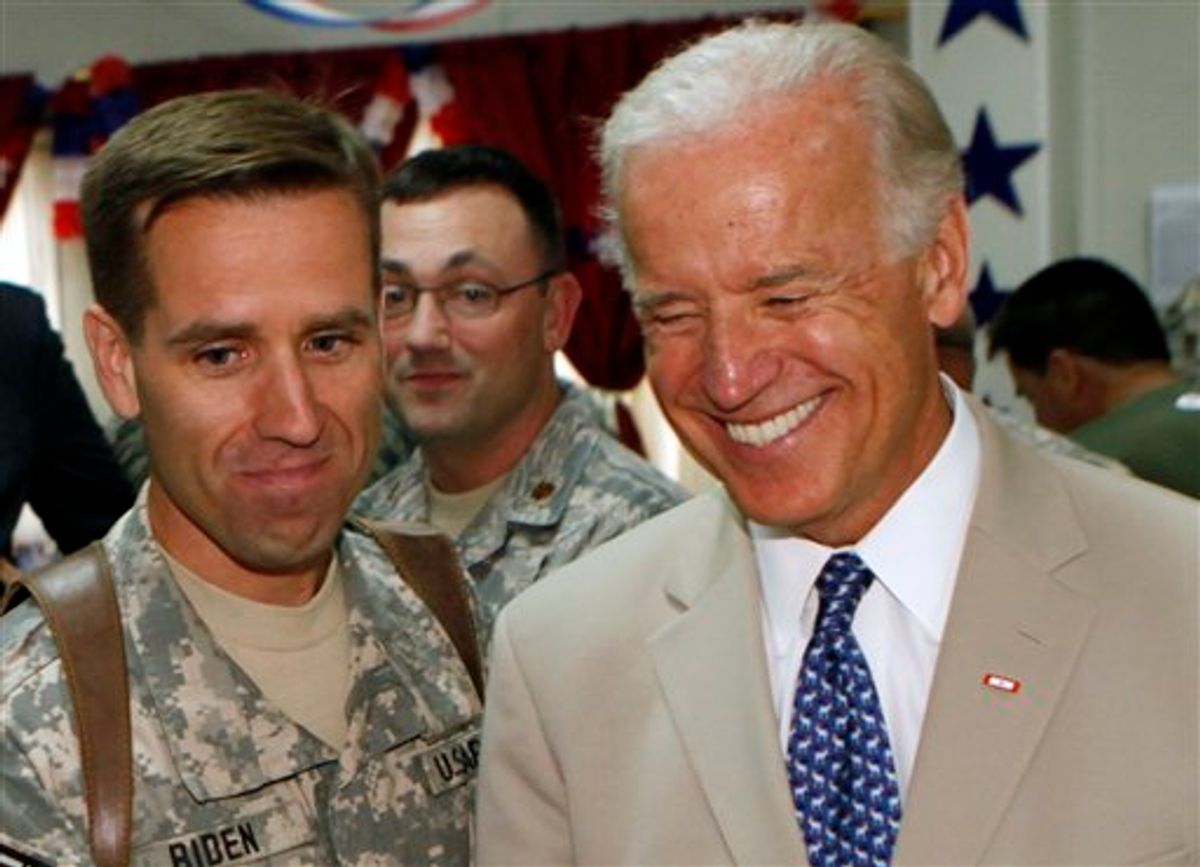 In this July 4, 2009 photo, U.S. Vice President Joe Biden, right, is seen with his son, U.S. Army Capt. Beau Biden, at Camp Victory on the outskirts of Baghdad, Iraq. Vice President Joe Biden's son was being treated at a Delaware hospital, the White House said Tuesday, though it did not provide information about what might be wrong. Delaware Attorney General Beau Biden was awake and alert and communicating with his parents and wife, who were with him at Christiana Hospital in Newark. (AP Photo/Khalid Mohammed) (AP)
--

It's hard not to feel good for Chris Coons right now. With the Delaware Republican Party's suicidal decision to nominate Christine O'Donnell, the little-known New Castle county executive is now the clear favorite to become the state's next U.S. senator. And the only reason Coons is in position to receive such a lucky break is because he wasn't scared to enter a race that was supposed to be unwinnable for a Democrat.

The Senate contest, which is technically a special election to fill the final four years of the term Biden was elected to in 2008, was triggered by Biden's elevation to the vice presidency. Biden, who had held the seat since 1972, badly wanted his son, state Attorney General Beau Biden, to inherit it. But he couldn't hand it off right away (via a gubernatorial appointment): that might have looked unseemly. So instead, Delaware's then-Democratic governor, Ruth Ann Minner, appointed an old Biden aide with no political ambitions of his own, Ted Kaufman, to the seat. Kaufman would be a caretaker, someone to sit in the Senate and vote the right way in 2009 and 2010 without standing in Beau Biden's way in the '10 special election.

It all looked so simple and tidy back then, in late 2008. But slowly, things got complicated. First, President Obama's popularity began dropping -- hardly a shocking development, given the brutal economy, but one that steadily changed each party's midterm election prospects. Then, Mike Castle, Delaware's nine-term Republican congressman (and a former two-term governor) got interested in the race himself. He'd always aspired to the Senate, and at the age of 70, it was now or never. So last October, he jumped into the race.

The presence of Castle, with his broad popularity, and the increasingly toxic political climate for Democrats started to give Beau Biden cold feet. He was 40 years old and ambitious, but he had to be careful: The prospect of losing to Castle in a '10 election was real. How badly would that damage his image and his long-term prospects? Plus, it's not like Castle would stick around for decades, right? He'd probably win the seat in '10, treat the next four years as a well-earned career-capper, then ride off into the sunset in 2014. Then Beau could run for the seat himself (probably in a much better climate) and take his rightful place on the national stage. And so it was that Beau Biden announced in January that he wouldn't be a candidate for the Senate in 2010 after all.

Nor was John Carney, the popular lieutenant governor who had been edged out in the 2008 gubernatorial primary, interested in taking on Castle. Why mount a longshot Senate race when Castle's at-large House seat was suddenly open and there for the taking?

Only then did Coons, then 46 years and with ten years of low-profile service in county government under his belt, enter the picture. The nomination was his because no one else wanted it; no sane Democrat believed Castle could be beaten. Heck, maybe Coons didn't even believe it. But if nothing else, the race would offer him a chance to gain exposure and name recognition. That's how Democrats nationally looked at Coons: a sacrificial lamb who might get something out of the deal down the line.

And that's how they -- and everyone else -- viewed him all spring and summer, all the way until August 24, when little-known Joe Miller stunned Lisa Murkowski in Alaska's GOP Senate primary. The upset was fueled by the Tea Party Express, which had poured $600,000 into Miller's efforts -- and which immediately announced that it would seek to roll its success over into Delaware in an effort to knock off Castle in the September 14 Senate primary. The spotlight was suddenly on O'Donnell; the Tea Party base rallied behind her and Sarah Palin provided an endorsement. Suddenly, Castle was in grave danger of losing the primary. Coons only had to watch from the sidelines while licking his chops. The value of the Democratic nomination was increasing in direct relation to O'Donnell's momentum, and Coons had it locked down. When the results finally came in Tuesday night, it's likely that the cheers were just as loud in Coons' headquarters as they were in O'Donnell's.

Now, it will be a shocker if Chris Coons doesn't win in November. He just turned 47 a few weeks ago, meaning that he could be in the Senate for decades to come, sitting in the Senate seat that Joe Biden held for 38 years -- and that his son was too apprehensive to seek on his own.