Exclusive: Elizabeth Warren in her own words 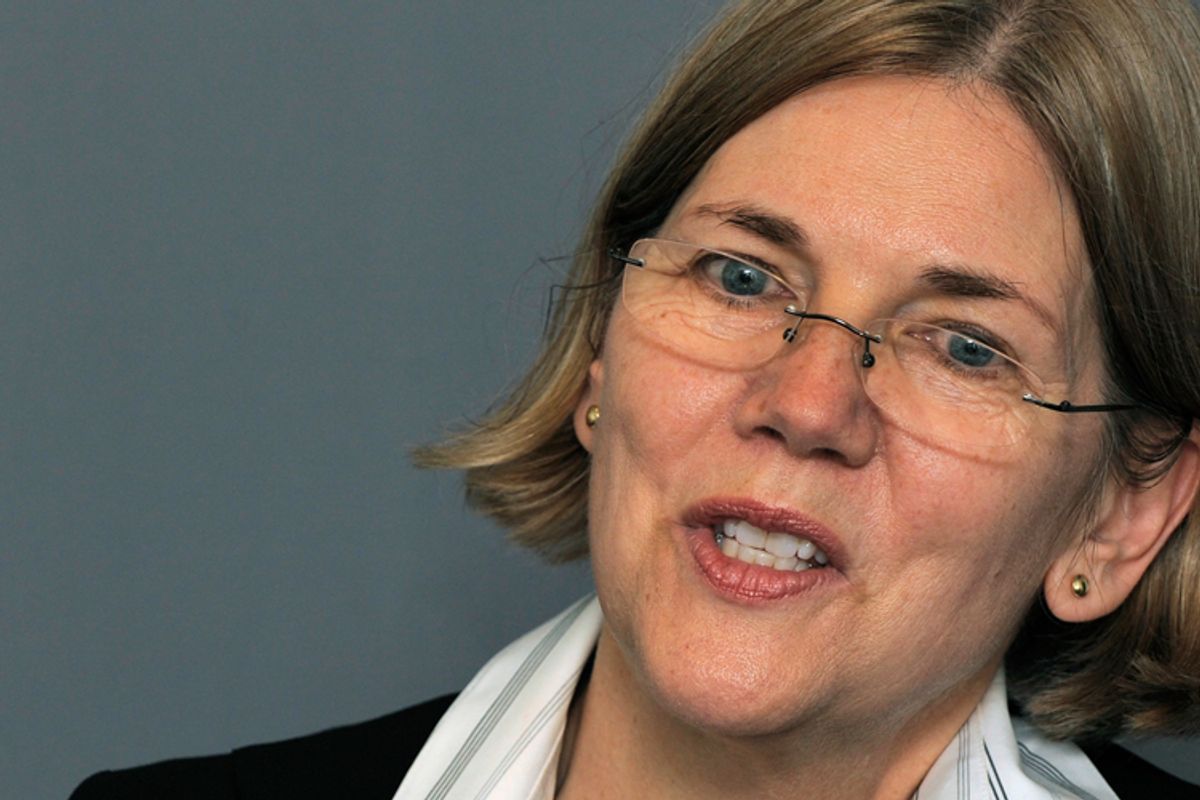 This is the first installment of "The Influencers," a six-part interview series that Lynn Parramore,  a media fellow at the Roosevelt Institute, is conducting for Salon. She sat down with Elizabeth Warren, whom President Obama will reportedly deputize to help launch the new Consumer Financial Protection Bureau, this summer at the Netroots Nation conference in Las Vegas.

What are some of the values that were instilled in your childhood that you would like to see emphasized now?

I guess it is a fundamental belief that people are doing the best they can. It is easy when you are successful to think that you did it all by yourself and to forget that you didn’t. You got here because a lot of things broke your way. You were lucky enough to be born into a family that could afford to take care of you well. You were lucky enough to be able to have a family that could pay for you to go to school or buy your way out of scrapes. And to people who have had a lot of luck and don’t acknowledge that -- the world looks like a total meritocracy, right? I’m on top because I really won, because I am better than everyone else.

I think I grew up with a profound sense of watching people who were good people, who were smart people, who were hardworking people -- God, nobody on this Earth worked harder than my mom and dad -- and they had very little. But they made do with what they had. They had their family, they raised four kids who loved them and four kids who all had our own families that we loved. And so, I guess the only way I can say it is that the value is in knowing that the game doesn't always come out fairly. There is a lot more going on. The material success at the end of the day is only a small part of it. Truly successful lives are about family.

Has your idea of fairness changed in recent years, particularly since the financial crisis?

I have been focused on the issue of fairness for 20 years now, ever since I started doing research on the economics of the middle class. I wanted to believe “work hard, play by the rules” equals success. I knew that my parents struggled, but I wanted to believe it was better now. And what I began to see in my research was that the rules were beginning steadily to work against the middle class. Healthcare, there’s an example. It was not the case in the 1970s that a modest medical problem could land a family in bankruptcy. The advances in medical technology are wonderful, but the financial impact has become staggering. Sure, for one segment of society, the people with the gold-plated healthcare, the consequence of a medical problem is nothing more than medical. But for the much larger proportion of Americans, the financial consequences of a medical problem can be devastating. We studied these people in our bankruptcy research, and that’s one that I regard as fundamentally unfair, not just in the sense that the Lord deals different cards to different people, and some get sick and some have babies too early. But unfair in the sense that any one of us could be hit, so why is it that we don’t take care of each other? Why is it that we aren’t more careful to make sure that none of us can be devastated financially by a medical problem? So, yeah, I’ve been studying the unfairness of how it translates into the economic insecurity of the middle class.

Is the middle class disappearing?

It is more that it is trembling; it is crumbling. Middle class used to be synonymous with secure, with steady, with boring, because middle-class people were people who were pretty much safe from the time they first started work on through retirement and until their deaths, no longer. Now, to be middle class is to worry, is to be insecure, is to face much increased odds of job loss, of a healthcare problem, of a family breakup that can land a family in economic collapse.

We need to get out of debt, yet there are so many forces that conspire against us. What is the way out of that conundrum?

It is a conundrum that has to be approached from two different directions. One direction is from the individual, the borrower, the family. My advice there is to do everything you can to protect yourself, and I have a whole list of things that I would identify. But that by itself will not be enough. There is also the part about the rules of the game, about collective action, about what banks are permitted to do, about what lenders are permitted to do, about how we finance, our healthcare, what housing policy looks like, what education policy looks like, what it costs to educate our children. For those, the appropriate place to go is to the policy forum, to talk to Congress, to talk to the president, to speak to people about how we can change the rules by which we all live. So, the way out of the problem is both on a highly individualized basis and also on a collective basis.

No. Debt can be enormously valuable.

Borrowing money to buy a home – it can be a good investment. Borrowing money to buy a car so that you can get to work. Borrowing money to deal with an emergency, a serious medical problem. Those are all investments in effect in your future. But borrowing money because you can’t live on your current salary, assuming you are not under some kind of emergency situation, this is your day-to-day, if you are rolling credit card debt over month to month to month, and this is your real job, this is your real life, you do have a serious problem. Because people have got to bring their expenses and their income into line with each other. And so, that is where I focus on debt particularly with individual families. This is the part you need to see. There is a red light flashing if you’re carrying debt for reasons other than investment.

Why do you think you’ve become a lightning rod in recent years?

I don’t know. I have to say I often think that the things I talk about seem fairly obvious. Maybe I am a little plain-spoken about it, but why should that bother people? Let’s talk about the content of what I say. If you think I am wrong, tell me so and tell me why, and show me the data, show me the evidence, tell me the reason. Let’s have a serious conversation about the content, about what has happened to the incomes of middle-class American families, about what’s happened to their expenses on housing, on healthcare, on childcare, on college costs. Let’s talk about how the business model of the consumer credit industry has changed. Tell me I am wrong on any of that. Let’s have that conversation. But I sometimes have come to think that lightning rod is another way to say, “Let’s change the conversation” -- let’s make this all about something else. But let’s not really talk about the serious issues.

Has our financial system become too complicated for a person with a high school or even a college degree to navigate?

I think complexity has become a strategy. Let me just start with your credit card. In 1980, Bank of America’s credit card contract was just a little over 700 words long. That is a little over a page, easy to read. You could tell what the terms were. Today, credit card contracts can run 30 pages or even longer. And much of it is tiny, incomprehensible print. Now, why the changes? Well, part of it is regulation. A large part of it is that a complex document is one where it is a lot easier to hide the tricks and traps. It is a lot easier to fool people. No one realizes until after they’ve committed $5,000 on their credit card that the interest rate is no longer going to be 3.9 percent, but is going to jump to 28 percent.

Speaking of complexity, what has surprised you most about working inside of Washington?

It really is an amazing place. I’m thinking that the thing that has surprised me most is how hard it is to have a conversation about substance. And it is too bad because it means that we are not all engaged in the same game of trying to make things better and that often to disagree is to declare mortal enemies rather than to say, “I don’t see it the same way, I am seeing these data.” And if you can’t have that conversation, people can’t change their minds.

What part of your work excites you most right now and going forward? What are you most looking forward to?

Lynn Parramore is Media Fellow at the Roosevelt Institute, where she edits the New Deal 2.0 blog. She is also co-founder of Recessionwire.com and author of "Reading the Sphinx," named a "notable scholarly book for 2008" by the Chronicle of Higher Education.