I expected to hate it -- OK, love-hate it -- but then I found myself somewhere that feels like the best of America 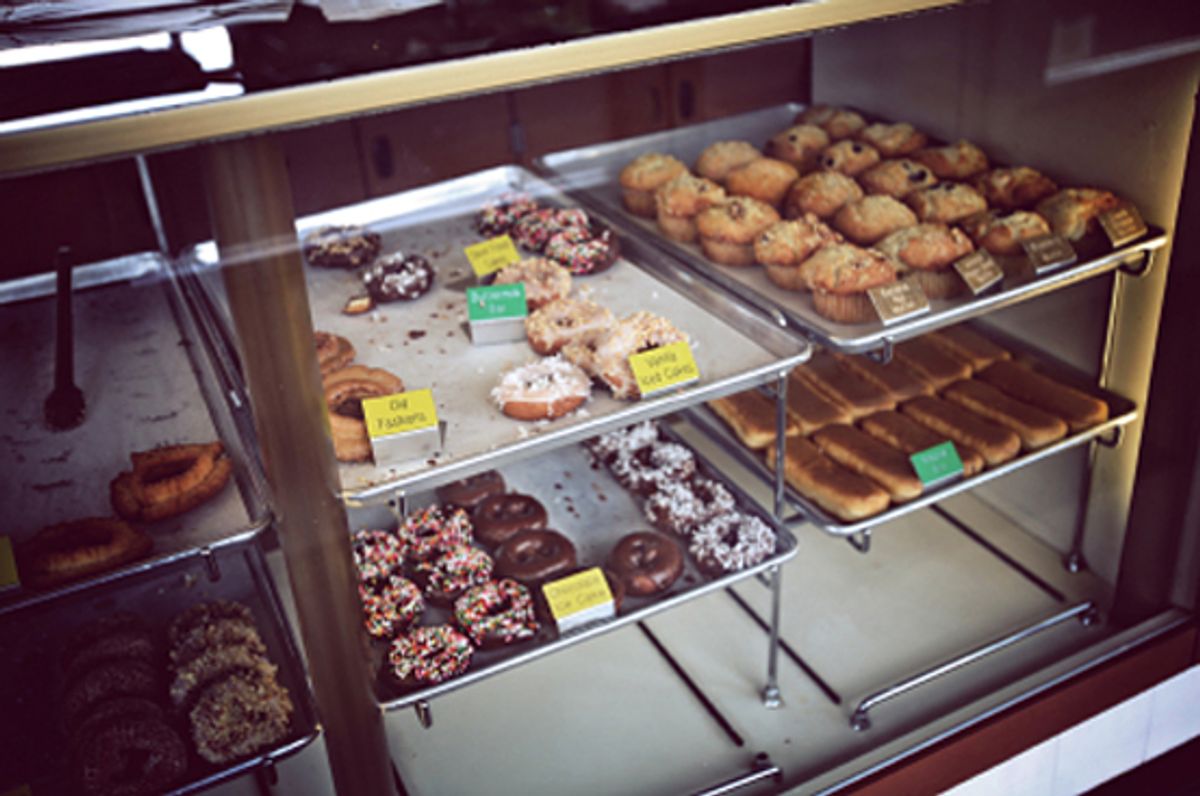 There are some things so transparently cynical in the food world that upon hearing about them I immediately look for someone to blame. I felt this way about the red velvet doughnut ice cream sandwich at the Peter Pan doughnut shop in Brooklyn, N.Y. How calculatedly on-trend is this thing? Unbridled excess? Check. Deep-fried? Check. Affected hominess? Check. And sure enough, the local food blogosphere was going nuts over it. Well, mission accomplished, Captain Hook: You're playing all the kids, for sure. You just cast the line with as much attention-getting gimmickry as … red velvet … you can … doughnuts … muster … ice cream sandwich … and … OK, well, I'll take a bite too.

And so I arrived at the shop, and yet it did not seem … how to say this? Viral web-marketing savvy. Instead, there was a strong sense of this working-class neighborhood as it was, as it has been for a very long time. Just a look transports you to ArchieBunkerland, from the twine dispenser hanging over the register to the double U-shaped counters, where customers sit down to sassy chitchat and coffee poured from glass warming pots. The girls pouring that coffee (I prefer the term "servers" but these were definitely "girls") wore carhop-style uniforms, ones that weren't preciously nostalgic so much as just really old, their polyester a few shades darker than the pastels they were meant to be.

As I waited for one of the girls to split open my deep-red doughnut and stuff it with some strawberry Häagen-Dazs, I noticed the woman sitting at the counter across from me. Wide-framed with a ploof of fine hair, she took the house phone off the hook and sat back down with it, the curled cord stretching like a tripwire for the girls racing back and forth pouring their hot coffee. She must be big here, I thought. She might be the one responsible for the ice cream sandwich. I eyed her with judgment and suspicion.

"That guy just left a nickel, Bob?" she said to a man sitting at the end of the counter.

"Yeah, he said it tasted like shit," Bob said, and the woman laughed hugely.

Elsewhere, there were old men striking up conversation with strangers to talk through their worries about the Yankees. A patient man listened to someone fret over whether to buy flood insurance. And the whole room took in, with nods of recognition, another man's piteous talk of knee problems. I suppose at 11 a.m. on a Tuesday, you do expect a clientele of retirees at ye olde coffee shoppe. "I'll tell you how to fix your knee – you gotta stop dancing all those fast numbers with the lookers!" a man said. No, really, someone said that. "Try the veal," I started to hope someone would say. "I'll be here all week." But, listening in, the conversations sounded like comfort, the kind of small talk between old neighbors that happens only in a place where people feel at home.

The sandwich came, and it was unabashed: big and fried and oozing ice cream. But it was also served on a plate that isn't meant to be thrown out, with a knife and fork and a neatly tucked paper napkin and an earnest admonition for me to enjoy it. It was … polite, unlike the perversities of the Burger King Pizza Whopper or KFC's Double Down, which are calculated to shock, awe and offend. I cut it and ate bites, which were exactly the sum of their parts -- cold, creamy, and crisp and cakey. It was, dare I say, understated.

"The healthiest part of the dish he leaves on the plate!" the woman called out behind me. I looked around for a moment before realizing she was talking about me. "The strawberries!" she laughed, pointing at the red bits floating on a slick of cream. "Well, why start with the health concerns now?" I asked, before asking her if she was responsible for this thing I'd just eaten.

"Yeah, it was my idea," she said with a certain pride, before blurting, "And we were on TV for it yesterday! It was National Ice Cream Sandwich Day, and some station wanted to show it." She was rippling with excitement. "I told all my friends to watch. Did you all watch?" she called to the room. "They came here with their cameras; I wanted to show them everything. But then I watched it and they made me talk for just one second. Oh well!" she laughed. "Our friends was happy for us. That's what matters," she said.

I looked toward the counters, where a few people looked up to give the woman a smile, and where I suddenly noticed a new mix of customers sitting down -- black couples, young hipsters with tight pants and creative haircuts, and a young mother wearing a Muslim headscarf carrying a baby. "Hey, honey," the woman said to her, leaning into the child. "How's he feeling today? Is his fever getting any better?" she asked.

The baby pulled back toward his mother. "Oh, he's so smart!" the woman said. "So young and so smart … he knows not to come to me!" she laughed. They talked for a while, the woman giving the mother advice on the fever. The baby's father came out from the kitchen, took off his apron, and the family left, waving goodbyes.

The woman took a seat back at the counter, when one of her customers mentioned the headscarf.

"They're Egyptian," the woman said. "It's made of that real nice thin cotton. You know, it's actually cooler there to wear it, since it keeps you out of the sun."

They moved on to talk about other things, asking about cousins and nephews, and every once in a while she would let out her big laugh. I paid my bill, waiting a while because the woman asked the server to pack five dozen doughnuts to give to the police precinct.

As I left, I took another look at the stack of doughnuts meant for ice cream sandwiches. Near them, there was a sign that read, "There are no strangers here, just friends and friends we haven't met yet." What kind of a cynic ever says that? I felt silently sheepish for my suspicion of the woman who runs this place. I called out to her. "Hey, thank you," I said. "This was great." She told me to come back soon.