Now the Tea Party has really done it 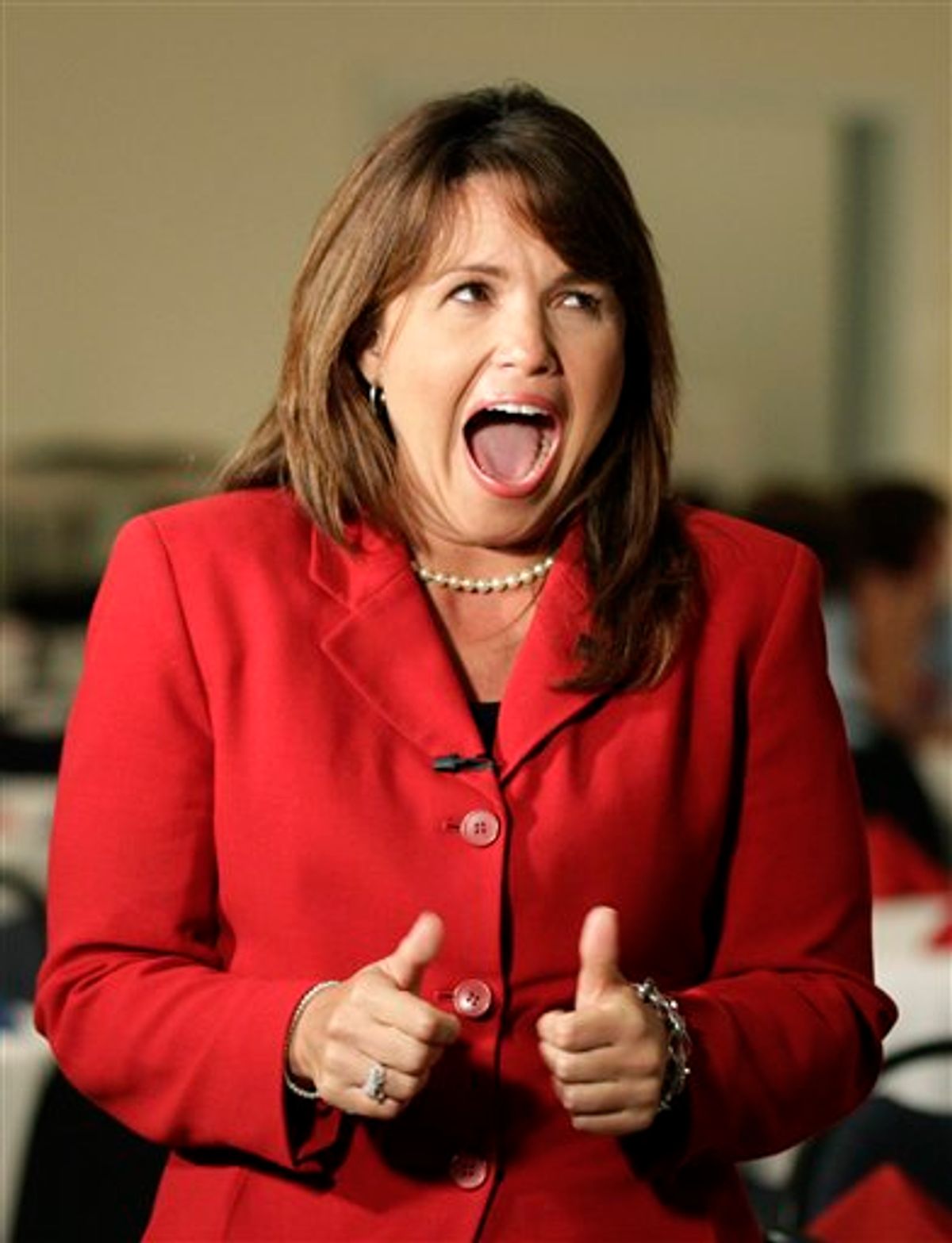 Republican Senate candidate Christine O'Donnell jokes with a supporter while waiting to be interviewed at her election night party, Tuesday, Sept. 14, 2010, in Dover, Del. O'Donnell is in a Republican primary battle with Rep. Mike Castle for the U.S. Senate seat in Delaware. (AP Photo/Rob Carr) (AP)
--

Republicans in Delaware faced a very simple choice in Tuesday's primary: Did they want to win Joe Biden's old Senate seat in November, or did they want to lose it?

They went with the latter option, and if that really surprises you, then you haven't been paying close enough attention to Republican Party politics in the age of Obama.

The 2008 election, the second straight election in which it suffered a crippling national defeat, left the Republican Party drained of its hangers-on -- less ideological voters who had, in the past, broadly agreed with the party's philosophy, even if they dissented on individual issues. What was left was an angry, restive base that resented (and even feared) Barack Obama and that believed the GOP had lost power because it hadn't been conservative enough. This base quickly found a catchy name -- the Tea Party movement -- and dedicated itself to cleansing from the GOP's ranks politicians who reminded them of the party's pre-2008 spirit.

It was the Tea Party  movement that compelled Arlen Specter, a 30-year Republican senator, to switch parties in 2009. It was the Tea Party movement that sent Charlie Crist, Florida's Republican governor and a man who was considered a potential V.P. nominee in 2008, fleeing. It was this movement that knocked off Robert Bennett, a three-term senator from Utah, at a party convention in May; that lifted the son of Ron Paul to the Republican nomination for the Senate from Kentucky; that elevated a shady former healthcare executive to the gubernatorial nomination in Florida; and that replaced Lisa Murkowski, an incumbent senator and the daughter of one of Alaska's most prominent politicians, with little-known Joe Miller.

And it was the Tea Party that tonight engineered its crowning feat (so far) of 2010: The utterly improbable victory of Christine O'Donnell, a right-wing gadfly and serial debtor who has equated lust with adultery and claimed that her political opponents follow her home at night and hide in the bushes, over Mike Castle in Delaware's Republican Senate primary.

All the way until the very end, few believed the Tea Party crowd would or could actually pull this one off. The race only became one of its targets a few weeks ago, when Murkowski went down in Alaska. That unforeseen success prompted the GOP consultant-run Tea Party Express, which had dumped more than $600,000 into the Miller effort, to turn its eyes to Delaware, where Castle possessed many of the same establishment credentials as Murkowski.

But Delaware was supposed to be different for two reasons: 1) Castle and his establishment allies, unlike Murkowski and hers, would see their enemies coming and be able to fight back; and 2) Delaware, unlike Alaska, is a blue-tinted state -- sure enough, Republicans would recognize how suicidal it would be to field a candidate as ideologically extreme, and personally flaky, as O'Donnell. Indeed, Castle unloaded on O'Donnell with a negative ad while the GOP establishment -- and even some national conservatives, who recognized the damage that her nomination would do to the GOP's chances of winning back the Senate -- played up her liabilities.

But it didn't matter at all. In fact, if anything, the anti-O'Donnell campaign seems to have hurt Castle and the establishment. A poll on Sunday showed her climbing ahead, 47 to 44 percent, and her final margin of victory looks like it will be 6 points.

Now, national Republicans will have to decide whether to support O'Donnell financially. On paper, she is doomed. PPP, the polling outfit that picked up on O'Donnell's rise on Sunday, has measured her favorable rating among general election voters at 29-50 percent. Just 31 percent of voters believe she's qualified to hold office. She was also running 26 points worse than Castle in trial heats against Chris Coons, the Democratic nominee. It is rare, if not unheard of, for such a gaping general election viability disparity to exist between two candidates in a competitive primary.

Tea Partiers, of course, will argue that O'Donnell will catch us all by surprise in November just as she did in this primary campaign. But her image with the general public seems to mirror that of the Tea Party: rabid enthusiasm among the GOP base, hostility from most others. Running in a GOP primary that was closed to independent and Democrats presented her with a voting universe just narrow enough for her to post a win. The November electorate will be much broader, and even though the casual November voters of 2010 will be strongly inclined to vote against Democrats, it's hard to imagine someone with her image problems -- which will probably only get worse  with the media shining even more light on her -- garnering a majority.

Just like Sharron Angle, the Tea Party-backed GOP Senate candidate in Nevada, O'Donnell calls to mind the example of Oliver North -- a Republican who was so tarnished that he lost what should have been an unlosable election in the last big Republican year, 1994.

To win back the Senate, Republicans will need to pick up 10 Democratic-held seats this falls (nine if they can then convince Joe Lieberman to caucus with them). All year they've been counting Delaware as one of those nine. But that was when Mike Castle was going to be their nominee. Now, Christine O'Donnell is, and the prospect of a Republican Senate majority in 2011 looks as slim as ever.