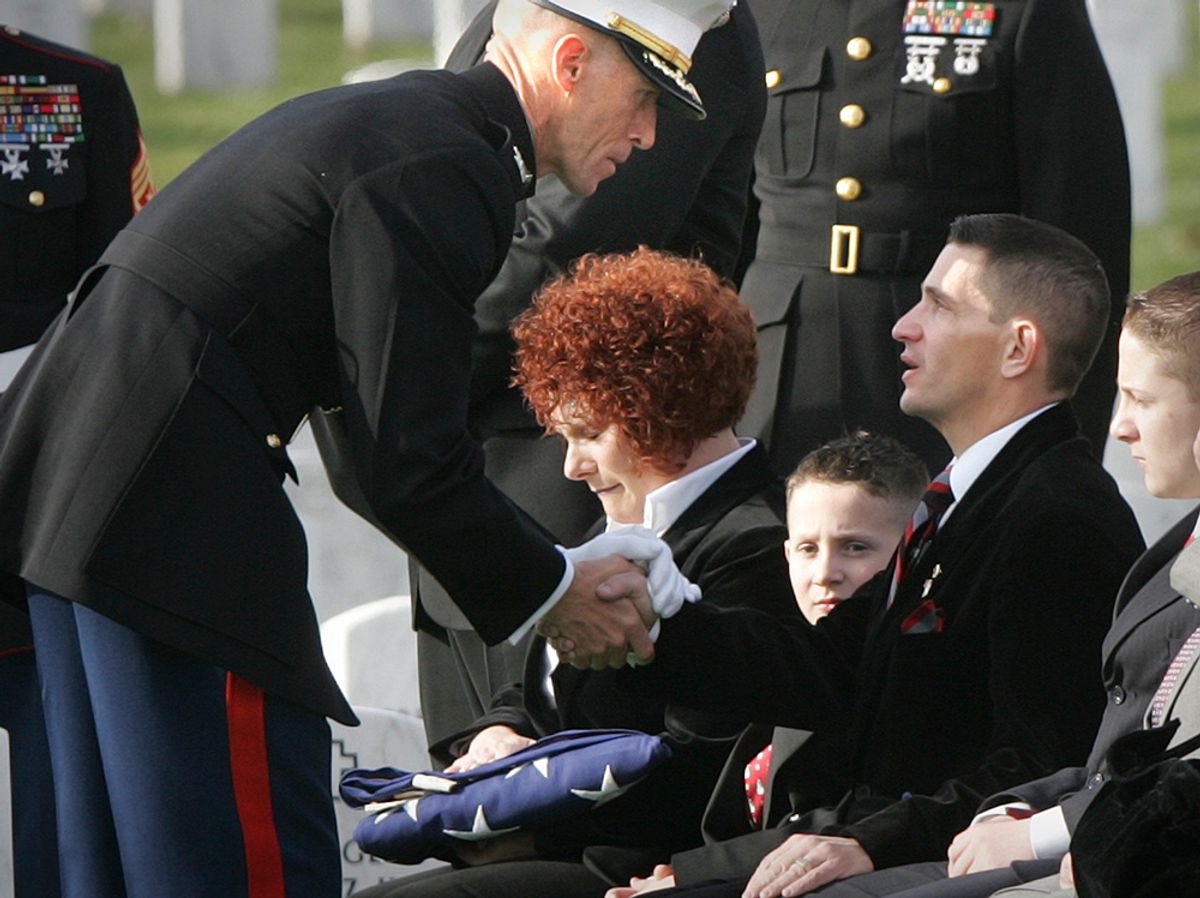 Marine Col. Gregory Boyle, left, pays his respects to the parents of Pvt. Heath D. Warner, of Canton, Ohio, Melissa and Scott Warner, after handing them the U.S. flag that was draped his casket, during funeral service at Arlington National Cemetery, in Arlington, Va., Tuesday, Dec. 12, 2006.
--

Scott Warner traveled to Washington from Canton, Ohio, this week for the disinterment of his son’s remains at Arlington National Cemetery. Warner wanted to be sure his son Heath, a Marine killed in Iraq in 2006, was buried in the right spot. He was worried because the Arlington National Cemetery scandal, uncovered by Salon in a yearlong investigation, had unnerved him, and some of his son’s burial paperwork contained disturbing discrepancies.

The media covered Heath’s disinterment Wednesday closely, including the conclusion that Heath was buried correctly. But that's far from the whole story.

"This thing has been portrayed as some big success story," Warner told Salon during a telephone interview Thursday as he drove back to Ohio. "It was a disaster. It was a desecration of honor."

It was also macabre. Warner says what really happened that day shows just how far the public trust in Arlington has evaporated and that the Army should be stripped of oversight of the cemetery. "Did I expect to be digging through my son’s casket looking for an arm? No," he said. "For a family to go through what my family went through yesterday is beyond reproach."

Warner had been suspicious even before he arrived in Virginia. During a Sept. 9 phone call with Kathryn Condon, the new executive director at the cemetery who was put in place this summer to clean up the scandal, Condon said a local funeral home had confirmed holding Heath’s remains just prior to his burial at Arlington in 2006. The same funeral home, however, had informed Warner there were no such records, Warner said.

Next, when Condon agreed to dig up Heath’s remains, she wanted it all done at 7 a.m., Warner says, before the cemetery opened to the public. "She tried to change the time from 8 a.m. to 7 a.m. so she could keep people out," Warner said. "I told her I would be there at 8." (He was.)

Then Condon said that Warner could bring two reporters to the cemetery with him, but no photography or video was allowed. "I said to her, you don’t have a problem with the media when everything is picturesque and you get those amazing photos," Warner recalled. "But when it gets to the ugly side of your mistakes, you want to hide it." (Warner lost this battle.)

Warner was so suspicious of the cemetery, he made Arlington agree not to open Heath’s casket until he got there. He wanted to see that process to make sure it was on the up-and-up.

"They said they were going to dig out the grave the night before and pump out any water that was in the vault," but not open his son’s casket. Warner said he was insistent and the agreement was clear. "They said they would not open the vault or open his casket until we arrived on the 15th."

The plan was that Arlington would pull up the casket with Warner there, and a friend of Heath’s would look at the remains to confirm his identity. This way, Warner would not have to see his son’s remains. Heath was killed in a roadside bomb attack in Anbar Province, Iraq. His body was badly ravaged by the blast, requiring a closed-casket funeral.

But when Warner arrived near his son’s gravesite, he was shocked when Condon handed him Heath’s dog tags. "Kathryn approached and said that they had opened the grave," he said. "They proceeded to tell us they opened the vault, brought up the casket and made an external identification and gave me his dog tags," he remembered. "They broke the agreement," he said.

Warner said his mind raced. He felt unsure of who or what to trust. "Everything had been compromised," he said.

Warner insisted they raise his son’s casket again. Arlington agreed. "The lid was (partly) open," Warner said he noticed as the casket came up. "It looked like my son’s remains were going to fall out."

Arlington workers put Heath’s casket on a flatbed truck, covered it with plastic and an American flag, and drove to a secluded warehouse on the cemetery perimeter. "It was like a garage," Warner recalled.

When the casket was opened, Warner panicked. He felt like he would never get real closure unless he did the unthinkable. "I literally jumped up on the flatbed. Don’t ask me how I did it," he said.

He looked at the remains. His son’s body was unrecognizable from the blast and the decomposition. "I could not even tell you what was there," he said, describing the grisly inside of his son’s coffin. "It was so bad. It was a ghastly sight."

Warner remembered a distinctive tattoo on his son’s arm. "I took my hat off. I took my jacket off. I began to dig in his casket," he said. "They gave me a pair of latex gloves."

Warner found his son’s torso. "The body had rolled," he said. Under the torso was Heath’s arm. "It was underneath his back," Warner said. "I began to rub some mud off his arm. I was able to make an identification because his tattoo was intact and viewable.”

Warner said he wants people to know what happened that day, how a scandal and further missteps by Arlington have driven grieving families past the edge. He says the scandal at Arlington followed by the cemetery’s bungling of the disinterment made him desperate for closure, and that his trust in Arlington has deteriorated to nothing. "I had no choice," he said about going through his son’s remains. "This was just beyond anything I ever imagined. It is something I will have to live with for the rest of my life."

Warner said he has no confidence that the Army, which has overseen the cemetery for years, can also be responsible for fixing the problems there: "These people should all just be fired."

For weeks, the Army has not responded to any questions from Salon or any requests for interviews about the Arlington scandal, including a request to interview Condon.