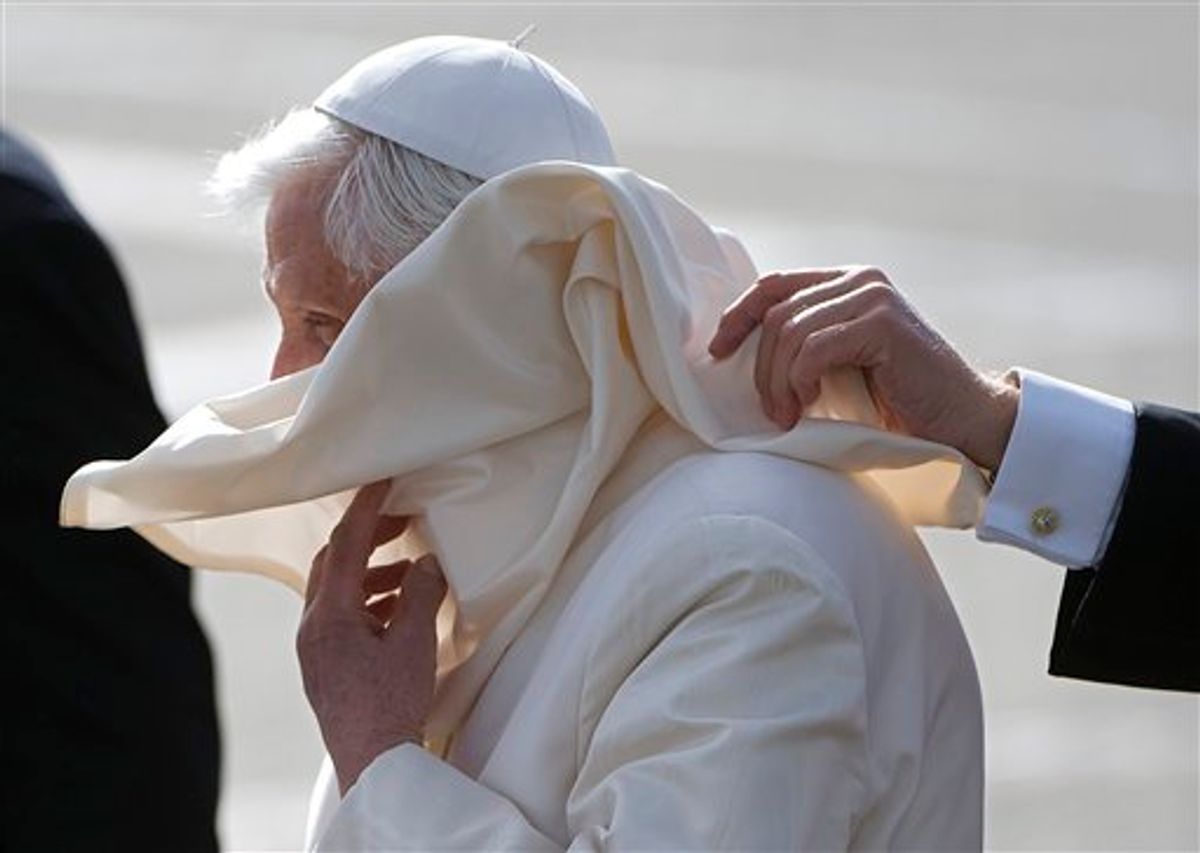 Pope Benedict XVI, beginning a controversial visit to Britain, acknowledged Thursday that the Catholic Church had failed to act decisively or quickly enough to deal with priests who rape and molest children. He said the church's top priority now was to help the victims heal.

The pope's comments to reporters traveling with him from Rome marked his most thorough admission to date of church failures to deal with pedophile priests. The issue has reignited with the recent revelations in Belgium of hundreds of new victims, at least 13 of whom had committed suicide.

Benedict's four-day state visit has been overshadowed by anger over the abuse scandal and indifference in the highly secular country, where Catholics are a minority at 10 percent and have endured centuries of anti-Catholic persecution.

The pope's first meeting Thursday was with Queen Elizabeth II, both head of state and head of the Church of England, at The Palace of Holyroodhouse in Edinburgh, Scotland.

Benedict was warmly welcomed by the queen, who wore a blue-gray knee-length coat and matching hat and gloves, as tartan-wearing bagpipers marched and thousands watched under cloud-streaked blue skies. The pontiff himself donned a green tartan scarf over his shoulders as he rode through Edinburgh in the Popemobile.

In her remarks, the queen told Benedict that his visit reminded all Britons of their common Christian heritage and said she hoped relations between the Anglican Church and the Catholic Church would be deepened as a result.

She also praised the Catholic Church's "special contribution" to helping the poorest and most vulnerable people around the world.

"We know from experience that through committed dialogue, old suspicions can be transcended and a greater mutual trust encouraged," she said. "We hold that freedom to worship is at the core of our tolerant and democratic society."

The pope, too, recalled the shared Christian heritage of Catholics and Anglicans and said he wanted to extend a "hand of friendship" to the British people during his trip.

He said the queen's forefathers' "respect for truth and justice, for mercy and charity come to you from a faith that remains a mighty force for good in your kingdom."

Benedict referred indirectly to his own roots, recalling how Britain fought the "Nazi tyranny" during World War II, "that wished to eradicate God from society and denied our common humanity to many, especially the Jews, who were thought unfit to live."

The German-born Benedict's visit comes as the country marks the 70th anniversary of the Battle of Britain.

The British media has been particularly hostile to the pope's visit, noting its 12-million-pound ($18.7 million) cost to British taxpayers at a time of austerity measures and job losses. Protests are planned, "Pope Nope" T-shirts have been spotted around London and public discussions of the Roman Catholic Church's celibacy requirement for priests are being held.

There also remains strong opposition in the U.K. to Benedict's hard line against homosexuality, abortion and using condoms to prevent the spread of AIDS.

Benedict acknowledged the opposition in his airborne comments to reporters, saying Britain had a "great history of anti-Catholicism. But it is also a country with a great history of tolerance."

Asked about polls that suggest many Catholics had lost trust in the church as a result of the sex abuse scandal, Benedict said he was shocked and saddened about the scope of the abuse, in part because priests take vows to be Christ's voice upon ordination.

"It's difficult to understand how a man who has said this could then fall into this perversion. It's a great sadness," Benedict said in Italian. "It's also sad that the authority of the church wasn't sufficiently vigilant, and not sufficiently quick or decisive to take necessary measures" to stop it.

He said the victims were the church's top priority as it tries to help them heal spiritually and psychologically.

"How can we repair, what can we do to help these people overcome this trauma, find their lives again and find again the trust in the message of Christ?" Benedict said.

He insisted that abusive priests must never be allowed access to young children, saying they suffer from an illness that "goodwill" cannot cure. In addition, he said, candidates for the priesthood must be better screened to screen out possible abusers.

The Vatican has been reeling for months from revelations from thousands of victims around the globe of priests who molested children, bishops who covered up for them and Vatican officials who turned a blind eye to the problem for decades.

Previously, Benedict has admitted that the scandal was borne of "sins within the church" but he had never acknowledged in such detail to the church's failures to act. Advocates for victims have long insisted he take more personal responsibility for the scandal, given that he was in charge of the Vatican office that handled sex abuse cases and was archbishop of Munich when a pedophile priest was assigned pastoral work while undergoing therapy for having abused young boys.

Benedict didn't take individual personal responsibility Thursday, saying only that the "authority of the church" had failed.

Vatican officials haven't confirmed that Benedict will meet with abuse victims while in Britain, noting that such meetings -- when they have occurred -- have only been confirmed after the fact. However, U.K. organizers say arrangements are being made.

Thousands of tickets to papal events remain unclaimed even as many of the faithful have expressed joy about his arrival.

The trip is the first state visit by a pope to the U.K., and his meeting with the queen is symbolically significant because of the historic divide between the officially Protestant nation and the Catholic Church.

The queen is head of the Church of England, which split acrimoniously from Rome in the 16th century, a division followed by centuries of anti-Catholic sentiment that resulted in Catholics being fined, discriminated against and killed for their faith. The visit also coincides with the 450th anniversary of the Reformation in Scotland.

The last papal visit to Britain was by John Paul II in 1982. Benedict's trip to Britain is a state visit because he was invited by the monarch.

Cardinal Keith O'Brien, leader of Scotland's minority Catholics, admitted that the damage caused by the sex scandals has been considerable.

"(The abuse cases) have caused terrible injury to children and young adults, and equally horrible have been the cover-ups, but I think the pope has put strong steps to prevent it from happening," he said in a statement. "Nobody loses face by saying 'sorry' and 'I'm trying to do better.'"

The start of the trip risked being overshadowed by remarks by one of the pope's advisers, German Cardinal Walter Kasper, who compared arriving in multicultural London to landing "in a Third World country." He also told a German magazine that an "aggressive atheism" was spreading in Britain.

The British media, expressing outrage, cited the remarks as the latest example of a gaffe-prone papacy. Kasper did not come to the U.K, and his office said it was due to illness.

Only 65,000 of the faithful are expected to attend an open air Mass at Bellahouston Park in Glasgow later Thursday, compared to the 100,000 previously expected. At the Mass the pope will be serenaded by Susan Boyle, the "Britain's Got Talent" reality show star who shot to global fame last year.

A beatification event will follow on Sunday for Cardinal John Newman in Birmingham, which will see the 19th-century English philosopher take a step on his way to sainthood.

The bookish pontiff lacks the charisma of his predecessor John Paul II, who pulled in a crowd of 250,000 for Mass at the same Glasgow park. Some may also have been put off by the 20-pound ($31) suggested donation for a ticket to Bellahouston.

Detractors such as the Humanist Society of Scotland believe people are indifferent to the papal visit because of the church scandals and growing secularism.

"The notion that it was the atheism of Nazis that led to their extremist and hateful views or that somehow fuels intolerance in Britain today is a terrible libel against those who do not believe in G.god," the group said Thursday in a statement.

The group placed billboards along the route the pope will take between Edinburgh and Glasgow that read: "Two million Scots are good without God."

Yet at St. Mary's Cathedral in Edinburgh, some worshippers were thrilled about the pope's visit.

"It is wonderful that the Holy Father is coming to Scotland and I prayed today for good weather," said Mary McManus, 78.

"(But) what's worse is that opponents of the church have made hay with them," he said. "In some ways, we are being made to feel foolish about being Catholic and so I hope this visit will make us proud."

Associated Press reporter Ben McConville in Edinburgh and Victor L. Simpson and Danica Kirka in London contributed to this report.