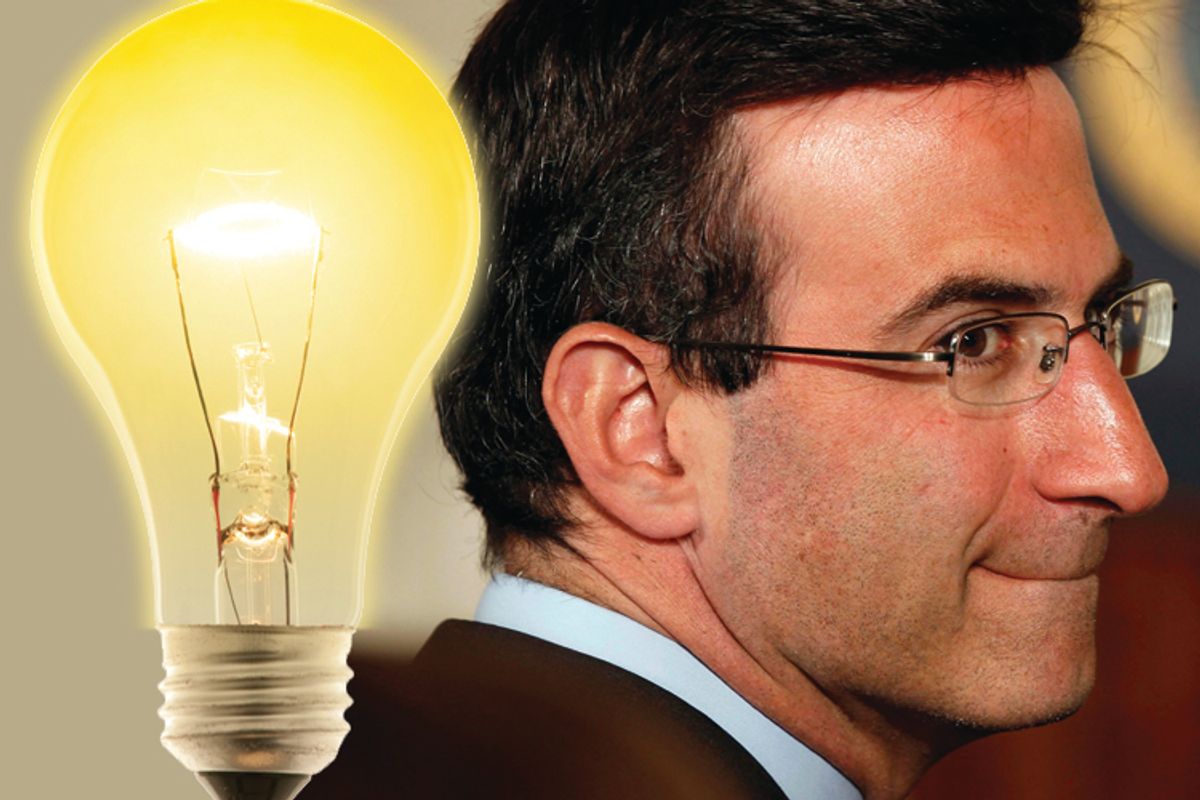 With the possible exception of sex, few topics make smart people stupid like anything to do with wealth, intelligence and social class. Question the relationship among talent, hard work and sheer good luck in any area of American life -- business, academia, the arts, even athletics -- and prepare yourself for a fight, likely a nasty one at that.

When the subject is "nature vs. nurture," people who understand the pointlessness of debating whether dogs, say, are superior to cats, can’t resist taking sides. Politics aside, members of what psychologist Steven Pinker calls "the Horatio Alger right and ... the egalitarian left" appear equally inclined to extreme positions, fiercely defending the barricades of folly against common sense.

Thankfully, in real life, hardly anybody acts as if they believed the things they say.

The latest manifestation of this odd phenomenon was a pair of essays by Peter Orszag, the recently resigned director of the Office of Management and Budget, in his new job as New York Times Op-Ed columnist.

Until July, Orszag was the Obama administration’s go-to guy on healthcare economics. He holds a degree from Princeton, and a Ph.D. from the London School of Economics, also the alma mater of that renowned scholar Sir Mick Jagger. OK, so Mick didn’t graduate, but he’s a very smart fellow. Anyway, Orszag didn’t study at some online diploma mill he heard about on Facebook. The guy’s a certifiable brainiac.

But he apparently wouldn’t want you to think so. In the first column, "Sweating Your Way to Success," Orszag reports reading Matthew Syed’s book "Bounce." A former table tennis Olympian, Syed supposedly "takes empirical evidence on the science of success seriously."

The science of success? In a book about Ping-Pong? That sounds like something you might see advertised on a late night TV from a P.O. Box in Fort Lee, N.J., for $19.95.

But I digress. Here’s the essence of it: Pick the "genius" of your choice -- Bill Gates, Eric Clapton, Carl Sagan, Luciano Pavarotti, Ray Charles, Rafael Nadal, Meryl Streep, anybody. (I’ve listed several who leave me cold.) Did they get rich and famous through innate ability or practice and determination?

Sheer effort, Orszag says. He thinks it’s a shame most of us have "bought into several misconceptions about excellence, which are not only wrong but affirmatively counterproductive ... Too many of us believe in the 'talent' myth -- that top performers are born, rather than built. But Syed shows that in almost every arena in which tasks are complex, top performers excel not because of innate ability but because of dedicated practice."

It’s at this point in the argument that the washed-up jock in me wants to ask: Never mind did you ever play a competitive sport, did you even attend high school gym classes? The idea that almost anybody can, say, reach the finals of the U.S. Open through sheer determination -- Orszag specifically mentions tennis -- is so silly, that as Orwell famously observed, "only an intellectual could believe it."

Now me, had I thrown more baseballs than I did between the ages of 10 and 20 my right arm would have needed to be surgically reattached. I failed to become Greg Maddux. Later on, I played a lot of tennis, but never enough to get three points in a set off Nadal. (I’m vain enough to dream that I might hit two aces. Probably not.)

Actually, I quite doubt that Orszag does believe it. He only pretends to out of some murky combination of idealism, guilt and/or pride that inhibits straightforward discussion of anything to do with opportunity and achievement in our society. It’s a syndrome Pinker’s book "The Blank Slate" mercilessly dissects as "the mentality of a cult, in which fantastical beliefs are flaunted as proof of one’s piety."

In a follow-up piece, Orszag halfway concedes an objection made by many readers "that it is too simplistic and that even with hard and dedicated practice, not everyone could become Mozart. Perhaps."

Perhaps, the man says. This in a newspaper whose readers rank nursery schools the way sportswriters do college football teams, and who begin scheming to secure their children’s enrollment in the Marie Antionette Pre-K Academy in advance of conception.

And in a country, furthermore, whose most important literary work may be "The Adventures of Huckleberry Finn," but whose national credo is based upon "The Little Engine That Could."

In real life, moreover, most of us know that the only answer to "nature vs. nurture" or "talent vs. practice" is: both. Some imponderable, unpredictable, often unfathomable mixture of both.

Furthermore that, as Ecclesiastes has it, "The race is not to the swift, nor the battle to the strong, neither yet bread to the wise, nor yet riches to men of understanding, nor yet favor to men of skill; but time and chance happeneth to them all."

But it’s impossible to have a serious discussion about it if everybody’s playing let’s pretend.