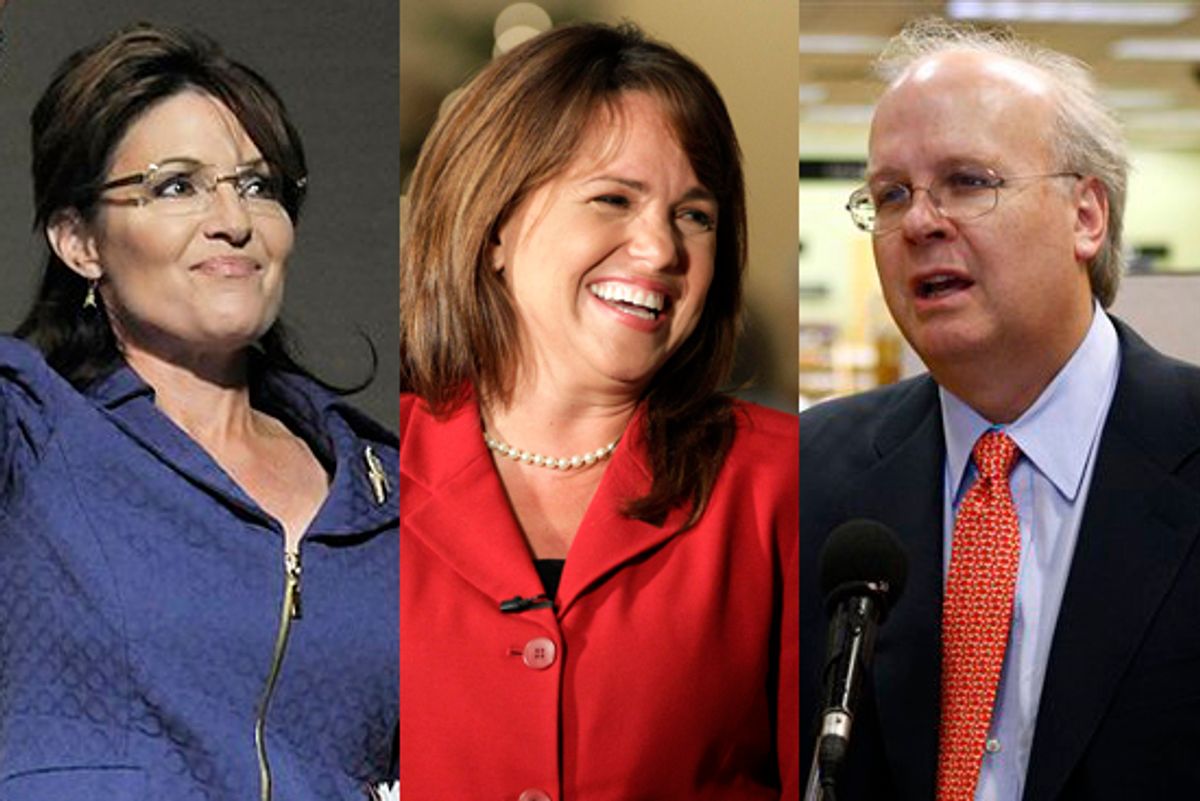 FILE - In this May 17, 2010 file photo, former White House adviser Karl Rove gestures in Oklahoma City. Turns out politics, for all its focus on the gloomy economy, is a recession-proof industry. This year's volatile election is bursting at the seams with money, setting fundraising and spending records in a high-stakes struggle for control of Congress amid looser but still fuzzy campaign finance rules. (AP Photo/Sue Ogrocki, File) (Sue Ogrocki)
--

There is really no conservative nutty enough to embarrass Fox News into not allowing him or her unlimited airtime and free fundraising support, so they were basically on board with Delaware's chaste shieldmaiden Christine O'Donnell the second the results were in.

Karl Rove, though, has this crazy notion about wanting to elect Republicans, and so he was briefly upset with Delaware voters for picking the nut instead of the electable Republican. He got in a little fight with Sean Hannity about it and everything.

But raining on the Tea Party parade is not really done on Hannity. Hannity is supposed to be a safe space. Rove understood that he came dangerously close to telling unvarnished truths.

So today, game face on, Rove announced his proud support for O'Donnell, this morning.

"Now, I've got a different role, outside my Fox role, and that's where I'm helping raise $50 million to elect Republicans to the Senate," Rove says, stretching the definitions of "different" and "outside." And then he claims responsibility for getting the NRSC to grudgingly send money to O'Donnell.

Rove is obviously trying to avoid a distracting "Rove vs. Tea Parties" media story, and he's canny enough to know that throwing the party's weight behind a doomed nut is wiser than acting put off by her nuttiness, when she's hardly nuttier than the party's standard-bearers.

Thankfully, Sarah Palin was on "The Factor" last night, with some golden advice for O'Donnell.

Go with her gut, get out there, speak to the American people, speak through Fox News, and let the independents who are tuning into you let them know what it is that she stands for.

Fox News is your golden ticket to the money the NRSC and RNC won't waste on your doomed campaign.

(Also it's been years and Palin still has that uncomfortable, rushed style of speaking extemporaneously, where you can obviously hear her struggling to remember her talking points. She's fine with prepared texts! Why won't someone buy her proper media training?)

So! It's a big happy Republican leadership family on Fox. The hysterical, paranoid fervor they've whipped up over the last two years may have led directly to an energized base selecting one candidate just a tad too extreme to win, but it'll probably all be worth it anyway, in the end.