Has the consumer advocate been sidelined or put to work? The answer depends on whether you trust her, and Obama 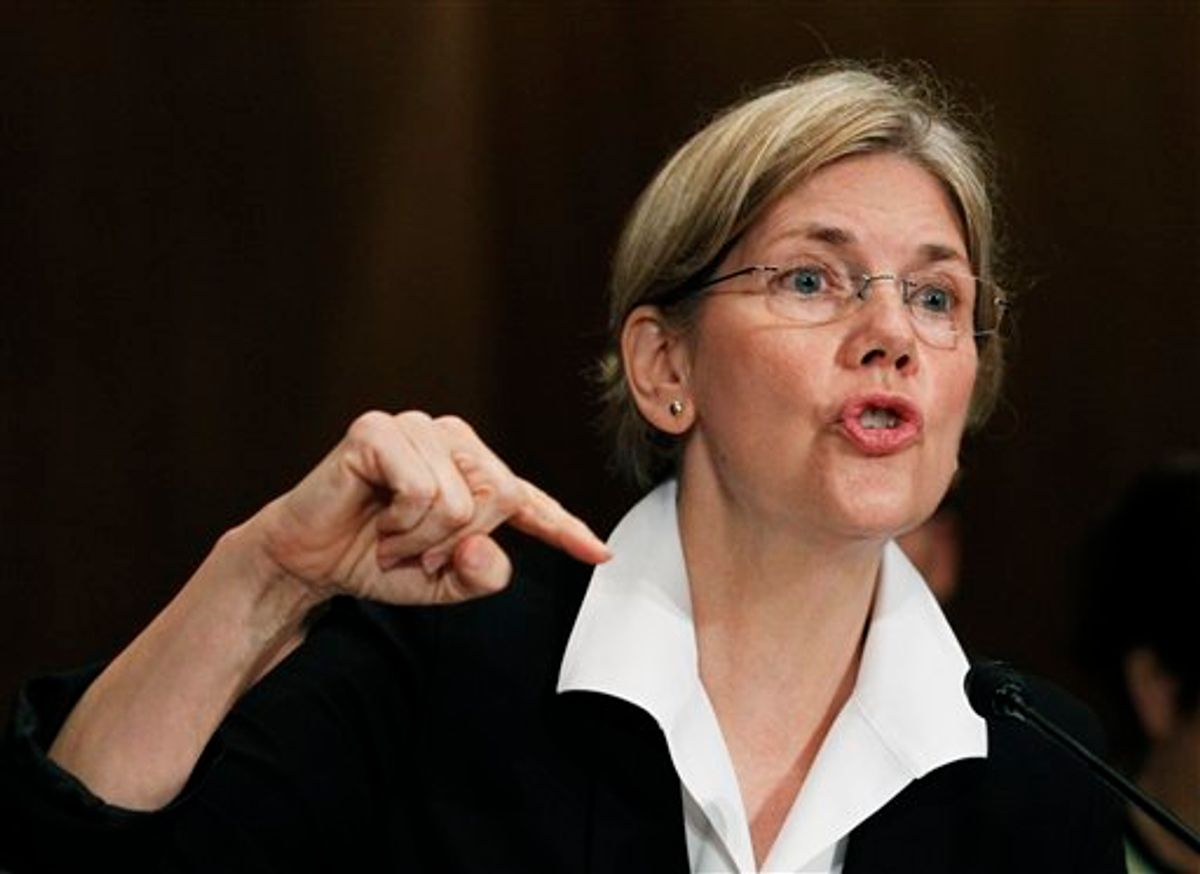 Elizabeth Warren, reports Brady Dennis at the Washington Post, "has told allies on Capitol Hill that she would prefer to avoid a prolonged confirmation process."

If so, she got what she wanted, at least for now. And as fans and opponents of Warren mull over whether Obama's appointment of the consumer advocate to the job of setting up the Consumer Financial Protection Bureau as a "special adviser" reporting both to the Treasury secretary and to the president is a pusillanimous cop-out or innovative workaround designed to beat a broken political system, it might be worth considering the possibility that Warren herself is OK with the stratagem.

It's certainly unlikely that it's a surprise to her. We know she met with the president recently -- and at about the same time canceled her fall classes at Harvard. It seems obvious that Obama laid out his plan, and she bought it into it. That's important. If Warren is the person her fans think she is, would she accept a job meant to shunt her out of any real power or responsibility?

...[T]he end game seems obvious: keep her in orbit through mid-terms to prevent a hissy fit from her many fans, then name a more bank friendly permanent director (the argument no doubt being that her effectiveness is compromised by her not being confirmed, and with the odds high that the elections will put more Republicans in Senate seats, the Administration will argue its hands are tied)...

I'm surprised Warren is accepting such a compromised position. Perhaps she believes she still has a bully pulpit and can embarrass the Administration into doing the right thing. But it will take a very thick skin for her to follow that course of action.

But if there is one thing that we've learned about Warren while watching her run the Congressional Oversight Panel investigating TARP, it is that she is absolutely fearless in speaking truth to power. No one has been a more relentless or biting critic of the bank bailout than Warren. The notion that she is being neutralized by her new assignment is an insult to the person we know her to be.

We also know that from the beginning, the Consumer Financial Protection Bureau was always one of Obama's highest priorities for bank reform. It doesn't make sense that his goal, now, would be to gut it. The far more likely explanation for the convoluted manner in which the White House is going about this is the most obvious one: Obama wanted to avoid an endless, acrimonious and quite possibly unsuccessful confirmation fight and put Warren to work. And while details are scarce, several news organizations are suggesting that her power will be real.

Ms. Warren's powers will be broad, despite her unusual title. She will recruit staff for the agency, set the policy mission and serve as the recognizable public face for a new agency the administration wants to promote.

So why not just use his power to make a recess appointment? There's the rub. I think many Warren fans felt a letdown similar to that expressed by a tweet from Matthew Yglesias, moments after the news broke, "With Warren, Obama showing real innovation in developing odd, satisfying to nobody compromises." A recess appointment would have shown guts, would have pissed off his enemies, and gotten high fives from supporters.

Yglesias writes today that he was initially "confused ... but after talking to some people this seems to be the case of a good idea that got leaked a bit prematurely rather than rolled out as the White House intended. What we've basically got here is a way for Warren to be the key architect in shaping the new institution that doesn't require her to go through the Senate filibuster wringer. That won't be the confirmation battle some people were hoping for, but on the other hand it means you don't need to risk losing a confirmation battle."

Fine -- but a recess appointment would also have avoided a confirmation battle while at the same time inspiring voters.

Maybe "No Drama Obama" believed a recess appointment would have caused such a ruckus that it would have disrupted his other agenda items at the moment -- like ending tax breaks for the wealthy. But that explanation just won't fly. Look at the reaction from Maine Republican Sen. Susan Collins, one of the GOP's few moderates.

"This is clearly a disingenuous effort to circumvent the Senate confirmation process and I oppose it," said Sen. Susan Collins (R-Maine). "The last thing we need is another 'czar' that is unaccountable to Congress and the American people. This is certainly not what Congress intended when it created this important position."

If that's what Collins is prepared to say, imagine what the rest of the GOP caucus is thinking. And remember, even some Democrats, like Chris Dodd, warned the administration not to avoid a confirmation vote. So what, again, is the rationale for not just making a recess appointment, or using the Dodd-Frank loophole to appoint her as interim director?

I don't know, and I look forward to hearing what the president has to say for himself when he officially announces the news. But ultimately, judging by the reader comments posted in response to my initial jolt of disappointment at the Warren news, if you were already disappointed in Obama, your feelings were ratified by the Warren un-bombshell. But if you were clinging to a narrative in which Obama is accomplishing whatever he can under insanely difficult operating conditions, you saw him continuing to make the best of a bad deal. Call it the Elizabeth Warren Rorschach test: You see what you want to see. But upon further reflection, I think I see more than just one image. I think it's possible to be simultaneously disappointed at the weak-kneed symbolism of this quasi-pseudo appointment, and yet be pleased by the reality.

Elizabeth Warren is being put to work. If she's the person we think she is, that's a good thing.