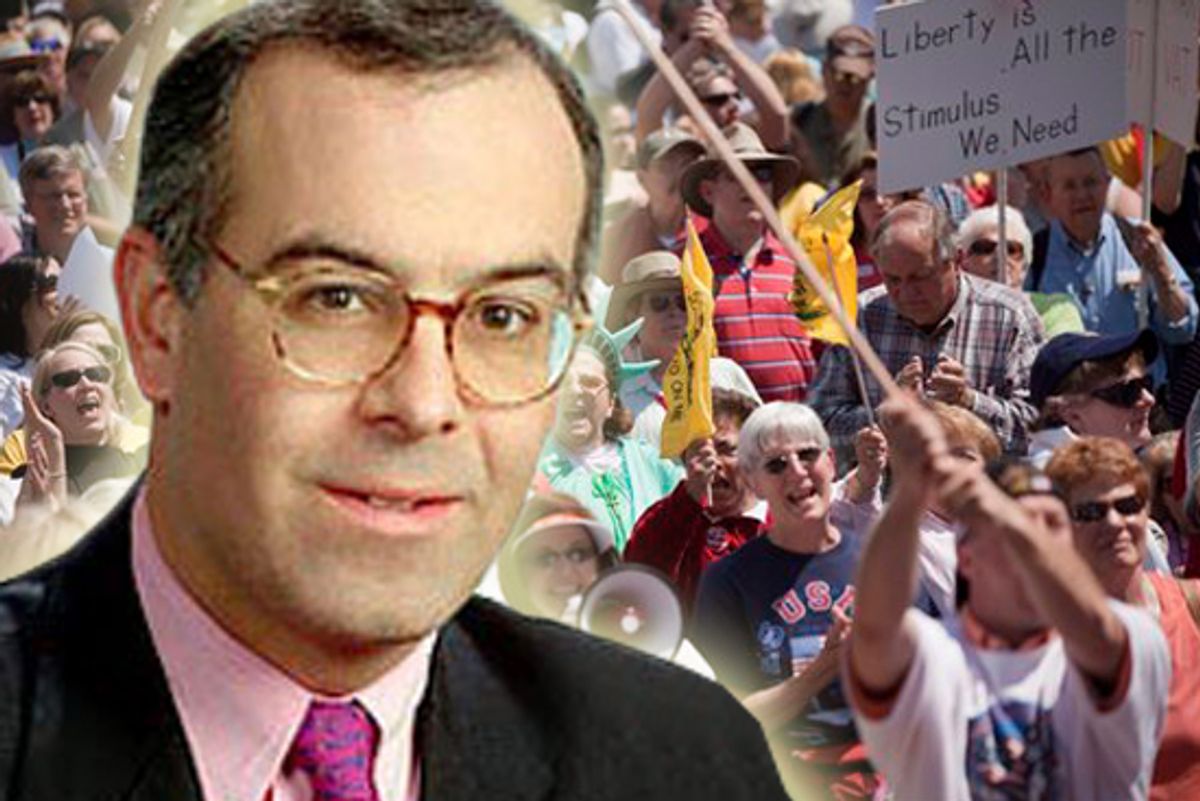 In his newest column, David Brooks makes a claim that is basically valid: Any Democrat who believes the Republican Party's embrace of Tea Partyism will cost the GOP a big number of seats in this fall's elections is wrong. His explanation for this is also basically valid: that with the economy stalled, swing voters are far more worried about registering their displeasure with the ruling Democrats than with voting against Tea Partyism.

In Ohio, Republican Rob Portman has opened up a significant lead on his Democratic opponent. In Kentucky, Republican Rand Paul is way ahead, as is Marco Rubio in Florida. In Illinois, Republican Mark Kirk has a small lead, and Linda McMahon has pulled nearly even in Connecticut. Sharron Angle, a weak candidate, is basically tied with Harry Reid in Nevada.

Here Brooks falls into a trap I described yesterday: assuming that because Republican candidates are ahead (or, in Angle's case, tied) in polls, it means the Tea Party hasn't hurt them. The problem, of course, is that it is entirely possible for a candidate to win an election even if he or she is being dragged down by the Tea Party. And there's evidence that this is exactly what's happening in some races.

Paul is a perfect example. The story is not that he's ahead of his Democratic foe, Jack Conway, by 7 points in the most recent poll; it's that Paul isn't ahead by a wider margin. Remember: We're talking about an open seat Senate race in Kentucky -- a conservative, deeply Obama-phobic state -- in an unusually anti-Democratic year. Republicans have a huge margin for error in this race; they should be winning it by 15 to 20 points. Paul, because of his perceived extremism and kookiness, has taken a hit. But because of that ridiculously high GOP margin for error, it won't be a big enough hit to lose. In a different, less conservative state, he'd be in more danger, just as he'd be in more danger in a different, less anti-Democratic year.

Brooks also totally misreads Angle's poll numbers. Yes, she's a terribly weak candidate. But so is Harry Reid! Has Brooks looked at Reid's personal poll numbers in Nevada? They're gruesome. Just about every major factor is lined up against Reid: his longtime incumbency, his status as the face of Senate Democrats, the horrible political climate for Democrats, the fact that Nevada is a purple state, and his own awful poll numbers. Against a generic Republican, he'd be trailing by double-digits now. As we showed earlier this year, incumbent senators with Reid's poll numbers basically never win reelection. But Angle's presence has pretty much eroded all of the GOP's margin for error in Nevada, taking a race that a Republican should win easily and making it a tossup. It's true that she might end up eking out a victory, but it will be more an indictment of her Tea Party ties than a testament to them.

McMahon, Kirk and Portman aren't even worth getting into. They're not Tea Party candidates; they're simply Republicans running in an extremely favorable environment for their party. And Rubio comes with two asterisks: 1) he's benefiting from a split Democratic base, with Charlie Crist running as an independent; and 2) he's a far more mainstream-seeming candidate than Paul or Angle. That is to say, he's not as tainted by the Tea Party because he doesn't seem to embody its kookiness the way Angle and Paul do. He's a glib, polished politician with a Tea Party ideology. Again, in a different year, that ideology might cause him problems; but this year, his own personal marketability will probably be enough to win him the benefit of the doubt.

Brooks is on more solid ground when he turns to the bigger picture and writes that the Tea Party movement "carries viruses that may infect the G.O.P. in the years ahead." But while it's true that the Tea Party movement won't cost the Republicans a ton of races this year, it's wrong to say that it won't cost them some votes -- maybe just enough to cost them two seats that will make the difference between a Senate majority and two more years (at least) in the minority.