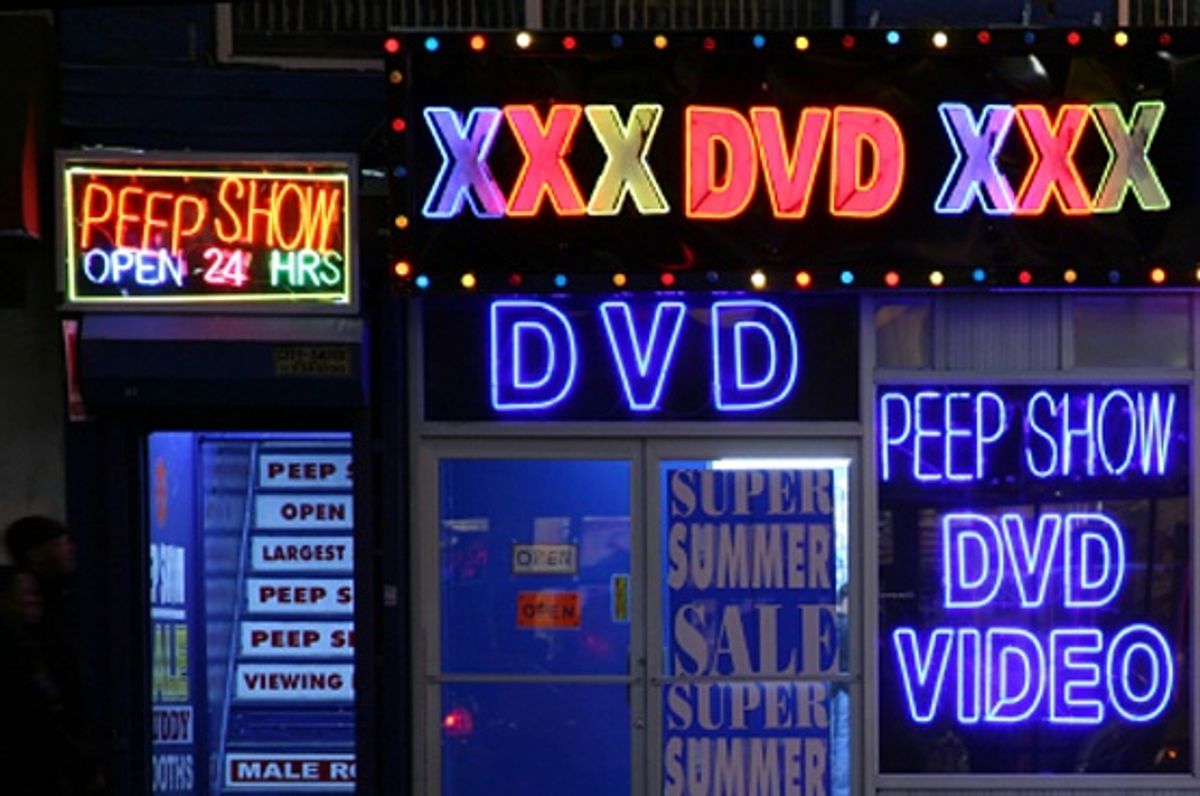 The sex-discrimination lawsuit against Goldman Sachs contains allegations that go beyond women being paid less and men being favored for promotions. It also claims that "female escorts" were hired to stand around in Santa hats for a holiday party and that one plaintiff was sexually assaulted by a male colleague after leaving a work event at a topless club. The suit raises lots of questions, most of which will have to be answered in court, but here is one I can tackle myself: How common is it for business events to take place at strip clubs?

If the abundance of lawsuits is any indication, it's plenty common. Tons of women, from Wall Street, in particular, have sued over business events at strip clubs, resulting in million-dollar settlements. (Morgan Stanley shelled out $54 million in one such case.) I called up the Scores in New York City, which is where the alleged Goldman Sachs event went down, for more. Tara Christine, the club's marketing manager, told me that "it happens all the time." She explained that they have a steakhouse in the back of the club that is "extremely upscale" and "a lot of people bring their clients here to spoil them." They will meet over some juicy meat (not a euphemism) and then proceed to "dessert" (definitely a euphemism). "They kill two birds with one stone," she says. Also, "they get to tell their clients, 'Hey guys, we're fun!'"

Coincidentally enough, Esquire published a piece just over a week ago that endorsed the idea of strip club business meetings and specifically recommended Scores. The author paints the hypothetical scenario:

You get there a few minutes before your reservation (and you don't really need one) to pre-order a porterhouse for two. You ask the girl in the cerulean Jasmine-from-Aladdin garb (who tells you her name is Jasmine) to swing by your table after the porterhouse is finished. Right on time, your client shows up and timidly wanders out onto "the floor," where his attention is immediately drawn to the semi-nude, the almost completely nude, and the completely nude. ... [Y]our client has completely forgotten about business of any kind. So you have the element of surprise on your side.

This isn't an issue of morality or sexual censorship -- businessmen have every right to loosen their ties and tuck some hard-earned dollar bills into a stripper's g-string. (So do businesswomen.) When this all goes down as part of a work event, though, things get complicated. When women are excluded from strip club outings, they miss out on networking and deal-making that can be critical to their career climb. (Call it "the mirrored ceiling covered in stripper-heel scuff marks.") If they're brought along, there's of course a chance they will merely bond with the boys, get in on the crucial business talk and have a great time. But your average woman is going to feel uncomfortable -- not to mention sexualized and perhaps degraded -- doing business with a pair of breasts being shoved in her face. We don't (in theory) tolerate sexually charged workplaces; should sexually charged corporate cultures be any different?