The greatest hits of the Tea Party candidates 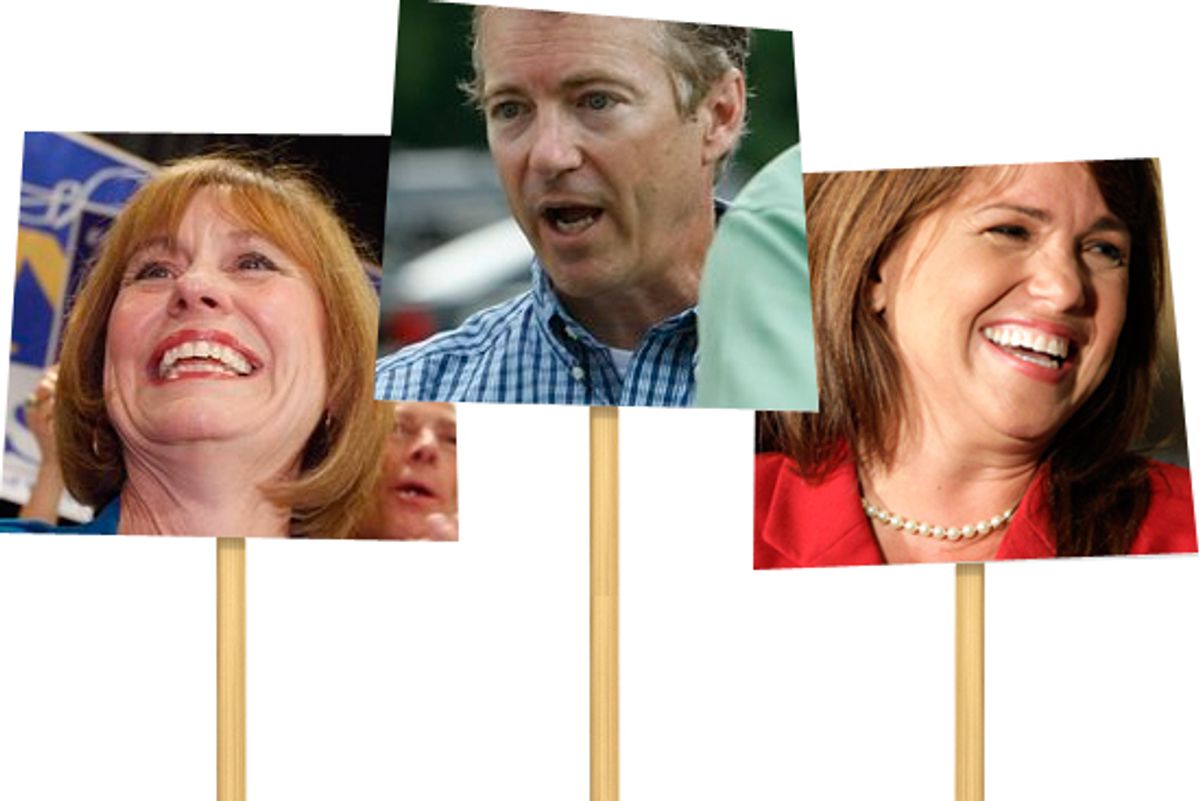 Perhaps the biggest story of the political year so far is the potentially suicidal decision of Republican primary voters to nominate so many candidates championed by the Tea Party movement. We'll learn in November whether the Tea Partiers will cost the GOP its chance at winning back the Senate, but one thing is already certain: They've given their opponents plenty of ammunition. Here are some of the most colorful, provocative and downright offensive moments offered up this year by Tea Party candidates:

Angle, who rose from nowhere to claim the Republican nomination for Harry Reid's Senate seat in June, has attracted media attention primarily for her refusal to address the press -- and the people of Nevada -- directly, a strategy born out of her high gaffe-potential. Local newscasters frequently refer to their difficulties in tracking down her communications director (whose voice-mail box is perennially full) ...

... and on several occasions Angle herself has been filmed literally running away from the press.

Angle's reluctance to address reporters is perhaps easier for us to understand, though, when we see how much she struggles to answer even the most basic questions about her views. The beginning of this clip from Keith Olbermann's "Countdown" supplies an excellent example.

And on the rare occasions when Angle has spoken at length on air, she's revealed views that might be termed ... eccentric. For instance, here she argues that foreign leaders should not criticize federal or state laws made in the U.S. because it is "none of [their] business." ("If they want to be our allies," she adds, "they should be cordial to us.")

And she believes, among other things, that the Department of Education should be eliminated.

There are fewer video gems involving Miller, the dark horse who scored a completely unforeseen upset of Sen. Lisa Murkowski in the Aug. 24 Alaska GOP primary. Miller, with degrees from West Point and Yale Law School, is more polished than many of his Tea Party compatriots. Still, this clip from an Alaskan parade in which Miller's campaigners marched is revealing for what it says about the voters his message most appeals to.

Rand Paul, the son of Ron Paul, knocked off an establishment candidate favored by Mitch McConnell in Kentucky's May GOP senatorial primary. Within days of that triumph, he stirred a national uproar by going on national television and suggesting that the Civil Rights Act of 1964 was flawed.

Delaware's overnight sensation Christine O'Donnell, whose pre-2010 media appearances have gone viral this week, also had her fair share of exposure during the campaign. Expect to hear about this pre-primary interview, in which conservative radio host Dan Gaffney grills O'Donnell over her flair for embellishment and past campaign debts, throughout the fall.

And then there's Ken Buck, who scored an upset in Colorado's Aug. 10 GOP Senate primary after he was caught on film telling a group of voters that they should back him over his rival, Jane Norton, because he doesn't "wear high heels." (Instead, he bragged, he wore cowboy boots with "real Weld County bullsh*t" on them.)