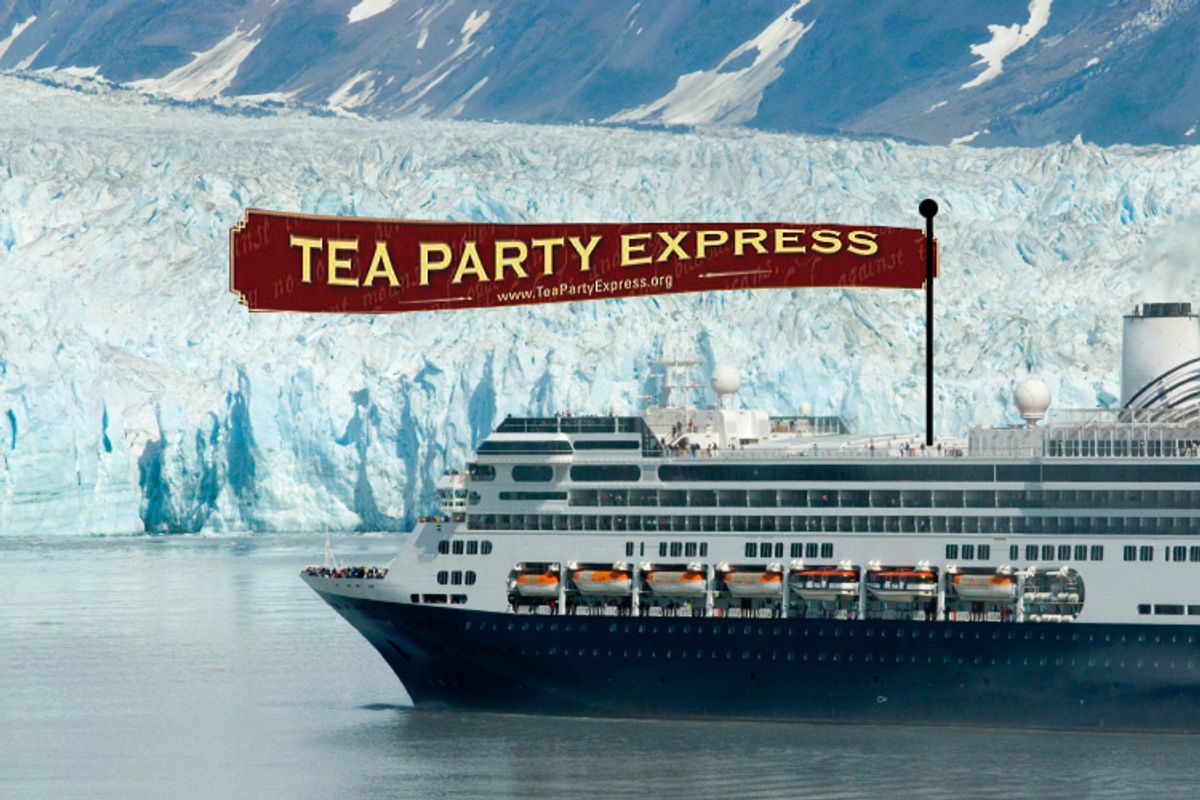 Staffers for the Tea Party group that fueled Joe Miller's stunning GOP primary upset of Sen. Lisa Murkowski in Alaska actually campaigned around the state on a luxury cruise liner, Salon has learned, even as they touted fiscal responsibility.

The Tea Party Express is a Sacramento-based group founded last year by several veteran GOP operatives to harness the conservative resurgence; it operates off of grassroots donations. By arranging rallies and making hefty ad buys (nearly $600,000 worth in Alaska) the group was a decisive force in the victory of Miller over incumbent Sen. Lisa Murkowski, and of Christine O'Donnell in Delaware over heavy favorite Rep. Mike Castle.

The group's chief strategist, Sal Russo, said in an interview with Salon that the cruise option was picked because it was cheaper than airfare, hotel, and food expenses on land in Alaska. Nevertheless, the image of staffers frolicking on a Holland America cruise has already prompted grumbling from some conservatives who are aware of the expenditure -- and it's likely to provide fodder for the other tea party groups that have accused Tea Party Express of irresponsible spending in the past.

Quipped one Alaska Republican to Salon: "Hey wait a minute, I thought the message was, 'Americans need to tighten the belt and especially Alaskans'? It was like the Tea Party Express Alaska summer vacation 2010 up here."

Kelly Eustis, a political consultant who worked for Tea Party Express before leaving in October 2009, told the Daily Caller recently that "employees would regularly run up bar tabs of more than $1,000 a week and charge it to Russo, Marsh or King Media, which would then bill TPE for the expense under a concocted fee." (Russo, Marsh is the consulting firm of Tea Party Express' Sal Russo, and King Media is closely linked to Russo.)

Russo acknowledged to the Caller that "young guys go out and have meetings sometimes at night and have a cocktail," but denied the tabs were so large.

The Tea Party Express has raised over $5 million from mostly small donors through e-mail campaigns. When one member of the rival Tea Party Patriots examined Tea Party Express' Federal Election Commission filings and saw money going to Russo's firm, he remarked last year, "What would the true grassroots people think if they knew their money is being spent in this manner?" Russo has maintained that his firm does not make a profit off Tea Party Express.

As for the Alaska cruise, Shroyer -- the former Tea Party Express political director -- told Salon that the trip was no vacation.

"In the office, we joked that this is probably historic: the first U.S. Senate campaign by an independent group run primarily from a cruise ship! And we worked our butts off, with a 'war room' on the ship and a team of people wielding their laptops doing TV ads, radio ads, newspaper ads, press releases and statements, and planning sessions from the ship," he said in an email.

And the Tea Partiers were pleased to find conservative views among their cruise shipmates.

"We also found that many of our fellow passengers were tea party supporters and would regularly run into them at our events and meetings at the various cities across Alaska," Shroyer said.