To the left of Obama, Elizabeth Warren

Hey, look! There's a populist defender of the working class in the White House 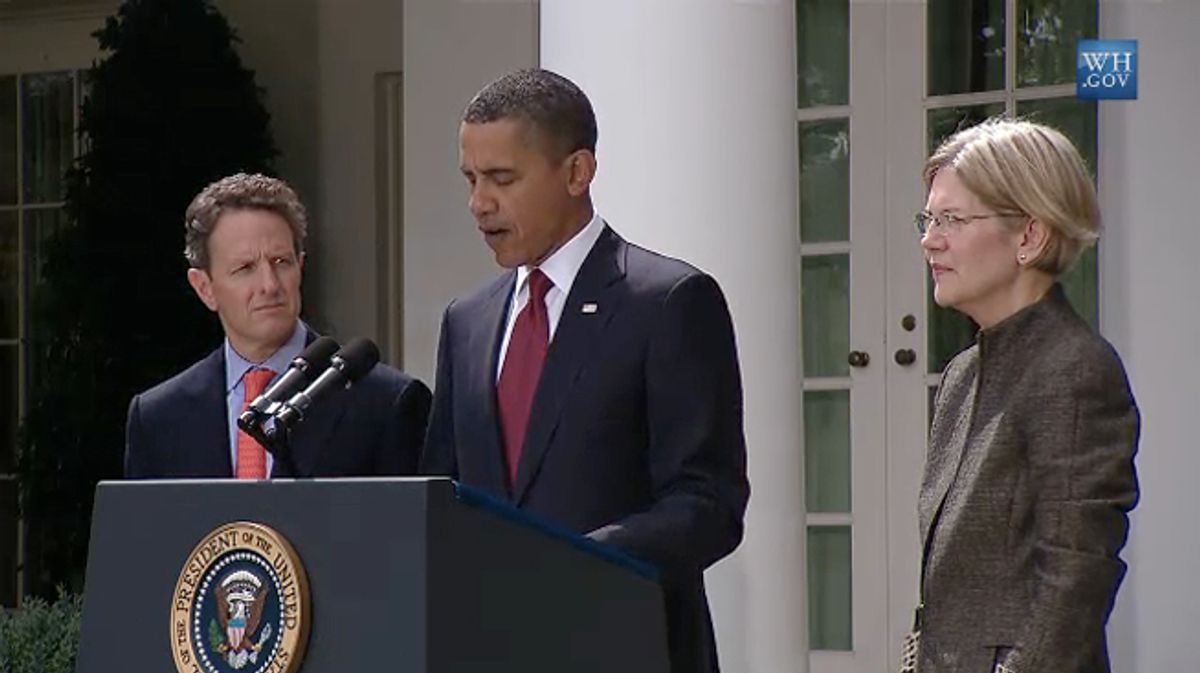 Flanked by Secretary of the Treasure Timothy Geithner on his right, and Elizabeth Warren on his left, President Obama officially announced his decision to appoint Warren -- the janitor's daughter from Oklahoma -- to the job of "standing up" the Consumer Financial Protection Bureau, early Friday afternoon.

"Geithner and I agree she is the best person to stand up the agency," said the president, after outlining his vision of the bureau as "a watchdog for the American consumer." He said that she would "oversee all aspects" of the agency's creation, including its staffing and agenda. And, in an aside that will no doubt disappoint Warren's fans, he said she "will help me decide who the best choice to run the agency" will be.

The Huffington Post's Shahien Nasripour reported earlier today the possibility that Warren might "pull a Cheney" and decide that she herself was the best choice to run the agency, just as Dick Cheney ended his search for a vice-presidential candidate by picking himself. The odds of that seem low, however, which raises the question: While it was nice to see Warren standing next to Obama, just how much satisfaction should we take from it?

Simon Johnson, no fan of the Obama administration's policy toward the big banks, offered three reasons yesterday why we should applaud the White House's innovative job offer to Warren. She gets to work right away, she'll have Obama's ear in the White House, and she'll do such a good job setting up the Consumer Financial Protection Agency in the next six months that when the time comes to nominate a permanent director, she'll face a much more winnable Senate confirmation fight.

I'll offer qualified agreement to the first reason for joy -- yes, it's a good thing that Warren is being put to work -- and totally disagree with the third. There is absolutely no reason to think Warren will have an easier time getting confirmed down the line. For one thing, Republicans are likely to have considerably increased power in the Senate after November and for another, supposing Warren does do an effective job setting up the agency, she will be considered even more of a threat to Wall Street and its bought politicians. I don't think her success will make her confirmation any easier.

But on further reflection, and after digesting the body language of the consumer advocate hovering right to the left of the president, reason No. 2 is increasingly coming to seem the most important, and justifiable, excuse to be excited about Elizabeth Warren's new job. "Special assistant" to the President may sound anodyne, but it's the same position that Obama's chief of staff, Rahm Emanuel, his national security adviser, Jim Jones, and Carol Browner, director of the White House Office of Energy and Climate Change Policy, all technically have. Theoretically, it includes "walk in" rights on the president, writes Tim Fernholz, in an extremely plugged-in summation of all things Warren. Progressives have been yearning for Obama to diversify his sources of economic advice away from the Geithner-Summers axis. This is it. Elizabeth Warren will be in the White House, bending the president's ear on the issues that most affect the average American.

Of course, the president doesn't have to listen. And he may not be as amenable to Warren knocking on his door as he is to Emanuel. But I think we can depend on Warren to do her best to make the most out of her opportunities. Maybe we should take her at her word when she says that she "enthusiastically agreed" to take the job.

Because I'm betting that she's already hard at work.