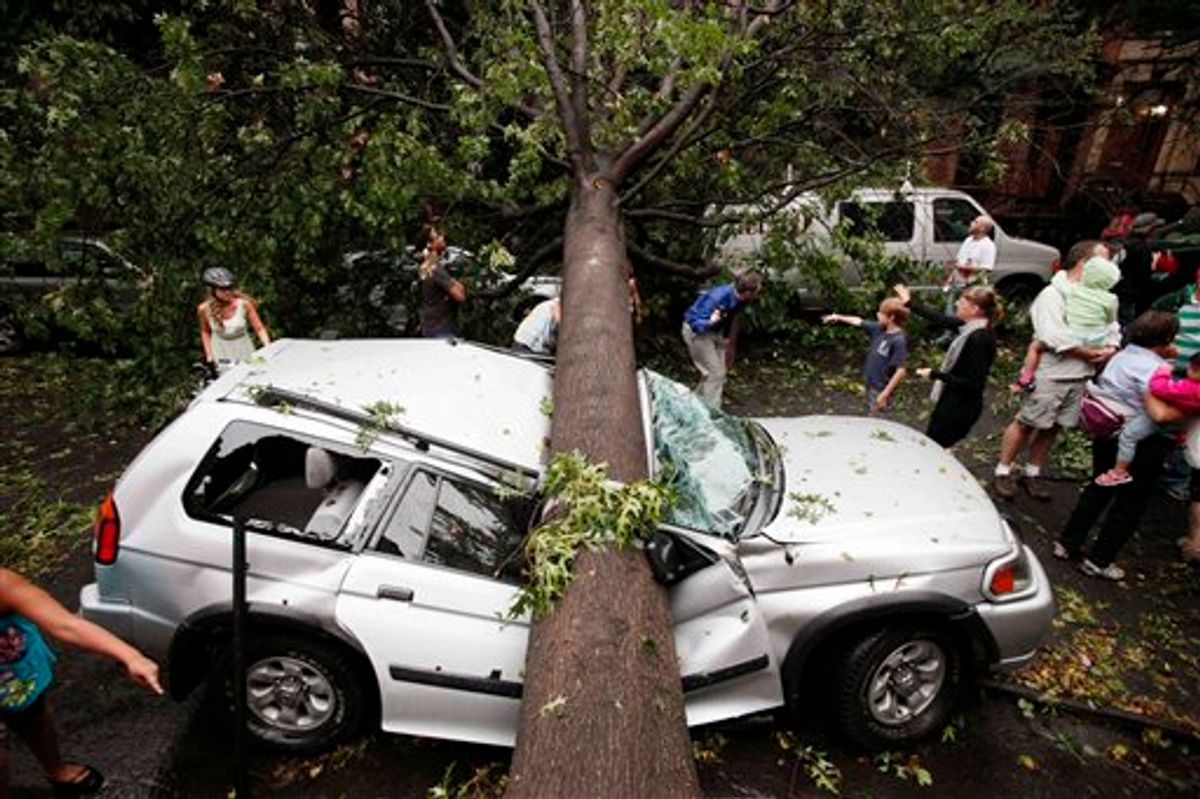 Residents in the Park Slope neighborhood in the Brooklyn borough of New York circle around a car crushed by a fallen tree, Thursday, Sept. 16, 2010. A brief but severe storm has swept through New York City, uprooting trees and damaging cars. (AP Photo/Mark Lennihan) (AP)
--

Residents, utility crews and railroad workers were cleaning up debris Friday after a brief but fierce storm barreled through the city, tearing up trees, stripping roofs from homes, disrupting train service and killing at least one person.

The National Weather Service was to dispatch investigators to assess whether a tornado touched down Thursday evening during the storm. Tornado warnings had been issued for Staten Island, Brooklyn and Queens.

Nearly 26,000 customers remained without power on Friday, Consolidated Edison spokeswoman Elizabeth Clark said. She said hardest hit was Queens, with 24,700 outages. At the height of the storm, a total of 37,000 customers were without power. Crews would be working to restore power throughout the day, she said.

A woman was killed when a tree fell on a car parked on a road in Queens. Driver Iline Levakis, 30, of Mechanicsburg, Pa., was pronounced dead at the scene and a 60-year-old passenger suffered minor injuries, police said. Numerous minor injuries were reported elsewhere.

"The good news is that most people were safe, just annoyed -- traffic being bad or a tree coming down in their yard," Mayor Michael Bloomberg said after touring storm damage in Queens.

Residents were awed by the power of the swift storm.

"A huge tree limb, like 25 feet long, flew right up the street, up the hill and stopped in the middle of the air 50 feet up in this intersection and started spinning," said Steve Carlisle, 54. "It was like a poltergeist."

"Then all the garbage cans went up in the air and this spinning tree hits one of them like it was a bat on a ball. The can was launched way, way over there," he said, pointing at a building about 120 feet away where a metal garbage can lay flattened.

Fire officials were inspecting 10 buildings in Brooklyn whose roofs were peeled off or tattered by the wind.

"The wind was holding my ceiling up in the air. It was like a wave, it went up and fell back down," said 58-year-old Ruby Ellis, who was doing dishes in her top-floor kitchen when the storm hit. "After the roof went up, then all the rain came down and I had a flood."

A neighbor in an adjacent building, Julian Amy, said he was sitting in his first-floor apartment when the storm barreled down his street. "I just heard a loud boom," the 33-year-old said. "I thought it was a truck accident."

Residents of the top floors of the buildings were evacuated. A structural engineer was called in to assess the damage.

Investigators planned to spend several hours Friday looking over the area and mapping out the width and intensity of the storm to determine if a tornado touched down, said Kyle Struckmann, a National Weather Service meteorologist.

Eight twisters have hit New York City since 1950, he said. The last was in July, when a small one hit the Bronx during a thunderstorm that left thousands without power. In 2007, a tornado with winds up to 135 mph touched down in Staten Island and in Brooklyn, where it damaged homes and ripped the roof off a car dealership.

On Thursday, a grateful Townsend Davis stood outside his Brooklyn home, where a 40-foot tree that was uprooted from the sidewalk and crushed two cars still had a sign in the soil around its roots that read "Respect the trees."

"Someone up there wasn't listening," said Davis, 47. "I'm just glad it fell that way, as bad as I feel for the owners of that car, because if it fell this way, my house wouldn't be here."

Davis' children and wife were in the home when the storm hit.

"All of a sudden, we saw this dark cloud, and it was moving. I said 'Let's go in!'" said Stephen Wylie, who was working in a backyard in Brooklyn.

Within seconds, the front door started lashing back and forth. Trees branches were falling and trees came flying from other yards, Wylie said.

"They smashed the whole backyard, a gazebo there. Then half the roof was torn off -- eight layers of it" -- leaving only a layer of wood, he said.