Danica McKellar: Are her math books bad for girls? 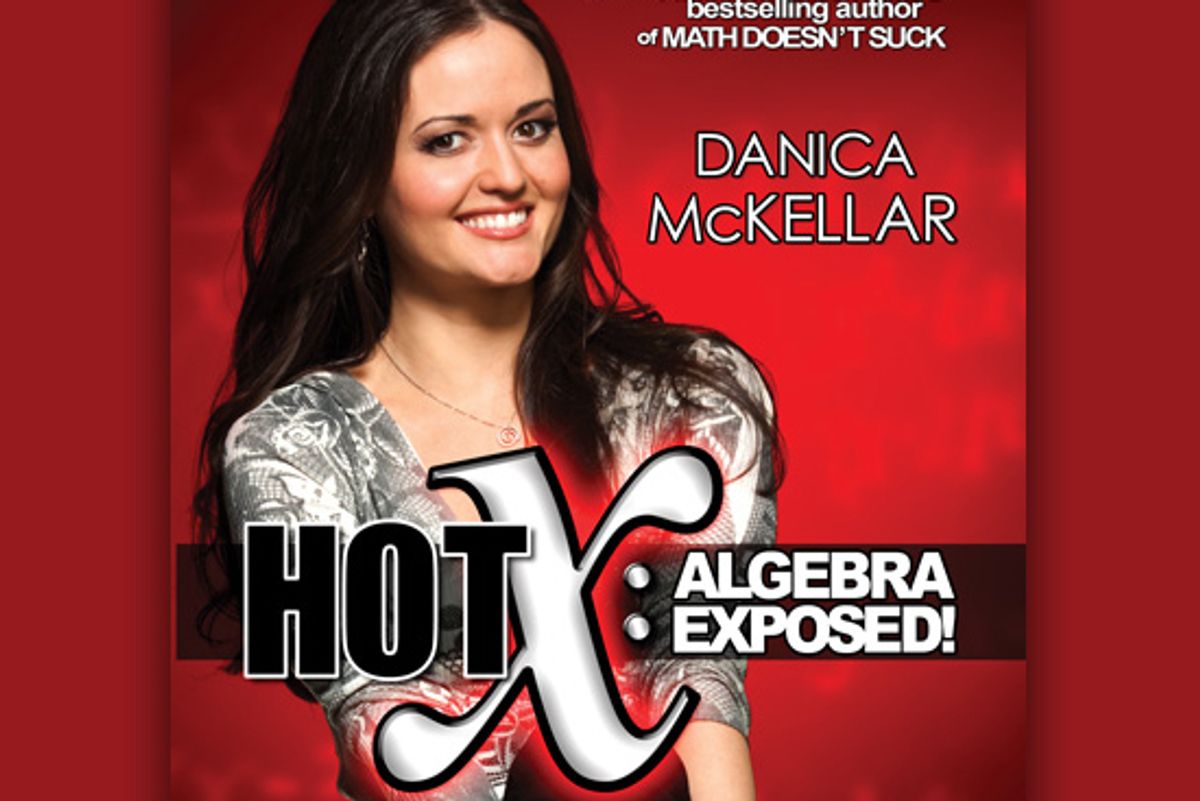 What's the best way to get girls interested in math? Despite decades of debate on the topic, the lopsided gender ratio in related professions persists. Average math scores in the U.S. are now the same for boys and girls, but boys still predominate in the upper reaches of math-whizdom, and girls are more likely to say they're bad at it even if they're doing fine. In the past few years, however, one line of math books seems to have hit on a wildly successful formula: convincing girls that solving equations will help them be popular and sexy.

Danica McKellar -- best known for playing Winnie Cooper, Kevin Arnold's love interest, on "The Wonder Years" (yes, really) -- has found a second career writing about math. Her books have all reached the New York Times bestseller list: "Math Doesn't Suck," "Kiss My Math" and the just-out "Hot X: Algebra Exposed!," which is exponentially more engaging and entertaining than any math book has a right to be. Yet McKellar's vocation as role model isn't uncomplicated: She holds a degree in mathematics from UCLA and co-authored a complex theorem that bears her name, but she's also posed for Maxim in skimpy lingerie, and her books feature cheekily sexy titles and fluffy packaging -- the cover of "Hot X" promises "boy-crazy confessionals!" Is she sending mixed messages that compromise her mission -- or just making savvy marketing moves?

Salon spoke on the phone with McKellar about the delicate politics of equating math skills with sex appeal.

In talking with my female friends about your book, I was shocked by how literally everybody had a horror story about math becoming impossible for them at some point. It still held a ton of anger and frustration for them.

I have so many of the same stories. After I became a math major, I was amazed to hear how deeply felt so many people's insecurity about math was. Math is closely tied to self-esteem on some level. And middle school is the time when girls decide that they're not good at math -- whether or not their grades are dropping. If you look at the grades, girls do fine in math throughout high school. But their belief in themselves changes. If you ask a boy who's getting a B-plus how he's doing in math, he's likely to say, "Oh, I do great." You ask the average girl who's getting an A-minus how she's doing, she's more likely to say, "Oh, I dunno, I don't really get it."

Do you think math has an image problem?

It does have a stigma attached to it. In the movies and on TV, math is always portrayed as something impossible or distasteful, or something that if you're really good at it, you must actually be insane. [laughs] It can't ever be a normal, fun, social person -- by the way, a female -- who also happens to be kick-ass at math. Why not?

Plus, the stereotype persists that being a highly intelligent female just isn't sexy. Many people think it's just harmful for adolescent girls to be so concerned with their sex appeal. But you tell girls, "Smart is sexy." Do you worry that you're seeming to suggest that it's OK to do well in school as long as it doesn't get in the way of being sexy?

When you're a teenager, it's really hard to figure out who you are. Girls are being inundated with movies and billboards and TV shows and magazines, 24-7, with images of women portrayed as nothing more than sex objects. When they're getting the message that you have to choose -- when they really believe that they have to be the smart nerd girl or they can be fun and sexy but kind of slutty -- if that's what they think their choices are, then that's a very dangerous message to be giving them. Because what looks like more fun? It looks like more fun to be fun and sexy.

Let's remove that idea that you have to choose. You can be fun and flirty and really, really smart, because you know you don't have to dumb yourself down. Dumbing yourself down only has to do with mimicking this one particular form of what the media tells us is attractive. And the stereotype that you have to be dumb to avoid intimidating men is really, really insulting to guys as well.   That's why my books look more like teen magazines than math books. Because I don't want girls to think, "Oh, well, here are the only images I ever see of women who are good at math -- they look like, you know, schoolmarms, or whatever." Let me show you that you can customize your life any way you want.

You've customized your own life in a rather uncommon way: In addition to writing three math books, you posed this past spring for a cheesecake lingerie photo spread in Maxim magazine. Do you worry about the adolescent girls who read your books seeing these pictures?

I think it's totally fine for girls to see that when you are in your mid-30s, you can have a healthy sexual image of yourself and have made great, smart life decisions because of doing something like studying math. Yes, I think it's an extremely positive message to give girls.   If they're reading the rest of the magazine, though, that scares me a little. The spread I did does give the message "smart is sexy"; that's what the whole interview was about. But most of the stuff in Maxim is not particularly giving a strong positive message to girls at all.

Do you think men need to be reeducated to find mathematicians sexy?

Men love that kind of thing. They love the smart is sexy thing! The naughty librarian? Come on! She takes her glasses off, pulls down her hair ... [laughs] It's all good. Most of the images that girls are getting of what is attractive are so limiting. And that's what I want to fight against.

I want to say, you can play with fashion and makeup if you want, you can be completely glamorous and fabulous and be totally kick-ass and smart, and take these Prada shoes and walk down Wall Street with your briefcase full of important papers. If that's the image of fabulous that you want to emulate, where smart is part of that image, you're gonna pick better guys, you're gonna pick better friends, you're gonna be a better friend. You'll be a more fully realized young woman by not turning your back on the smarts that you have. And by building on the smarts by doing something like math. Because doing math is like going to the gym for your brain.

You have two careers going on. One of them, your acting career, depends on conventional ideas of what's acceptable for women. And then your math career runs a bit counter to that. Do you ever feel like you're living a double life?

Well, the roles that I play, generally speaking, are not adding to the problem. I won't take roles that give women a bad name. Not that they have to be perfect characters. But when I read a script, if I can feel a degradation of women involved, I have no interest in doing it whatsoever.

Do you think that having those standards has taken a toll on your acting career?

It doesn't bother me if it has. It's fine. But, you know, face it, I'm not going to be cast as the two-bit whore.

Sara Marcus Sara Marcus is the author of Girls to the Front: The True Story of the Riot Grrrl Revolution." Follow her on Twitter: @thesaramarcus.