The richest man in New York is dabbling in national politics again, warning Dems to be nice to their donors 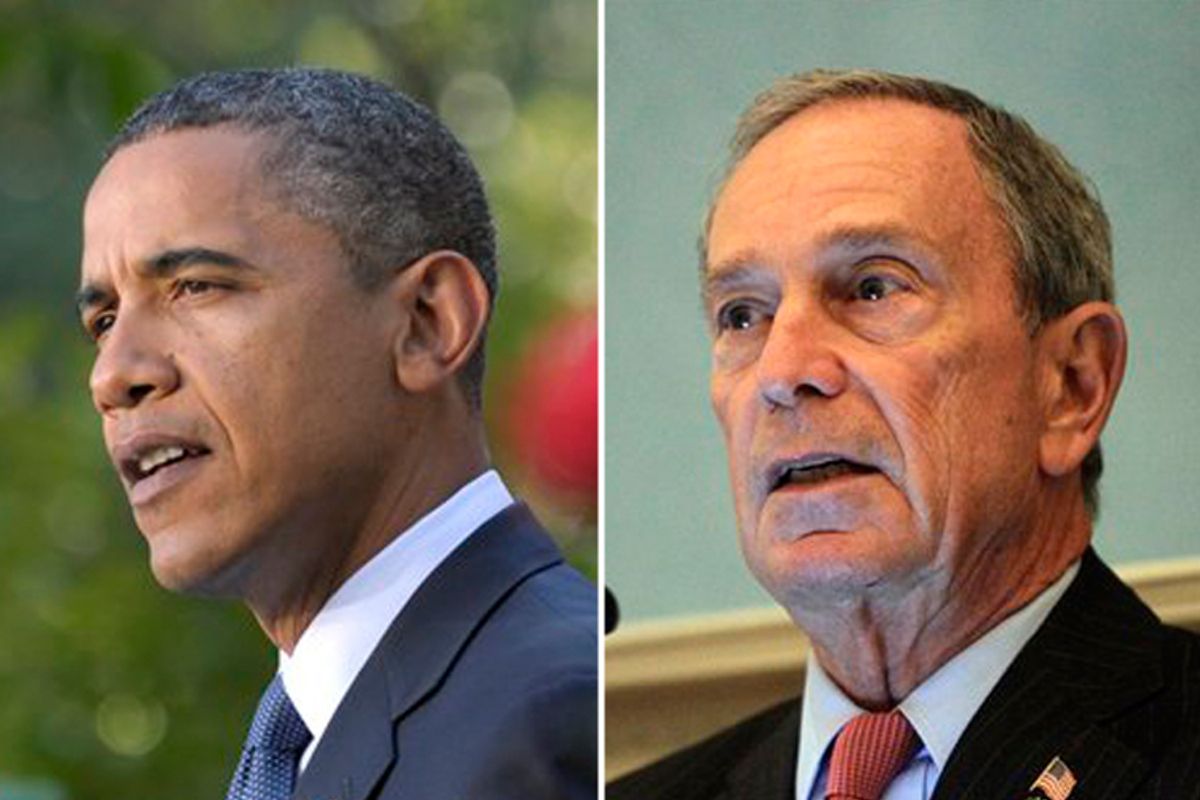 Not that Bloomberg used the s-word. He is far too civil for that. No, he is friendly with (but obviously disdainful of) the president -- who idiotically, constantly seeks Mayor Mike's approval -- but in a sit-down with New York Times City Hall reporter Michael Barbaro, Bloomberg offered some helpful advice to the White House political shop: Stop being mean to the plutocrats currently amassing and hoarding all the nation's wealth:

Asked to grade Mr. Obama’s leadership and his record in office, the mayor was careful to not criticize the president directly. “He’s had a tough row to hoe, in all fairness,” he said. But he hinted at the resentment of his fellow corporate chieftains toward government officials like Mr. Obama, who have questioned Wall Street compensation.

"I feel very strongly we should not be — success should not be frowned on, and I have lots of friends, wealthy people, made a lot of money, were big Obama supporters, gave him money, raised money for him, who are not happy now," he said.

"They all say the same thing: 'I knew I was going to have to pay more taxes. Somebody’s got to do it, and I’ve got the money,'" he said. "'But I didn’t expect to be vilified.'"

These people (I think I know which ones) sent Obama millions of dollars, and then he had the audacity to occasionally criticize the industry whose machinations plunged the nation into a massive recession? I mean, sure, every political action he's taken in terms of the economy has been to shore up the wreckage of a financial services industry producing nothing of value as Americans battle for low-paying service jobs, but sometimes Obama said cruel things about bankers, as his aides pushed congressional liberals to water down financial regulation language yet more.

Poor little guys. Why hate them for their success? Is it their fault they're hugely profitable again? (No -- it is the government's fault, actually.)

It is this rage of the winners of the ongoing class war that led Barack Obama to do an "economic town-hall" hosted by CNBC. It was a schizophrenic affair, where some in the audience begged him to do something for our growing underclass while CEOs and would-be finance titans repeated bullshit they read in the Wall Street Journal Op-Ed page, about how the president loves the deficit spending too much, and so on.

Bloomberg sat down with the Times despite his hatred for the local press in general (and reporter Barbaro in particular) because he's out selling his political brand again: Sensible moderate-ness! No shouting! Some Democrats and some Republicans! And the Times -- as invested as anyone in the myth of a sensible, moderate American center ideal that we must periodically return to -- is, as always with Mayor Mike, happy to help with the promotion.

Bloomberg's politics are your usual third-way garbage ("socially liberal, fiscally conservative") and that brand is, nationally, as unpopular now as ever. But his aides and friends are whispering in his ears again that he could be president. And so he's endorsing Harry Reid in Nevada and unpleasant bully Meg Whitman in California (who just beat his campaign self-funding record -- ain't democracy grand?). He's banking on an anti-Tea Party backlash, when we'll all go crying back to our betters -- Bloomberg and his fellow über-wealthy ruling class elites, who truly know what's best. (Gotta do something about that deficit!)

In the interview, Mr. Bloomberg radiated enthusiasm about his chance to have an impact on national politics and reveled in his own status as a rare popular incumbent. (A recent New York Times poll showed that nearly 60 percent of city voters approve of the job he is doing.)

According to Marist, Bloomberg is polling below 50 percent for the first time since 2005. (That Times poll showing "nearly 60 percent" approval also represents a five-year low for the prickly mayor.) He won 50.6 percent of the vote in 2009, after spending a ridiculous sum of money, while running against a complete nonentity. Basically, if it weren't for Staten Island, Bloomberg would be another bored, out-of-work billionaire right now. (Actually, if it weren't for Staten Island, Bloomberg wouldn't have been elected in the first place.)

Only in penthouses with park views and with the editorial boards of the world's dying newspapers does the Bloomberg brand have any real resonance. Candidates would be wise to keep that in mind before they seek to win his support by calling for an end to the vilification of our poor, sensitive billionaires.