The first episode of HBO's much-anticipated show is filled with murder, mayhem and big ideas 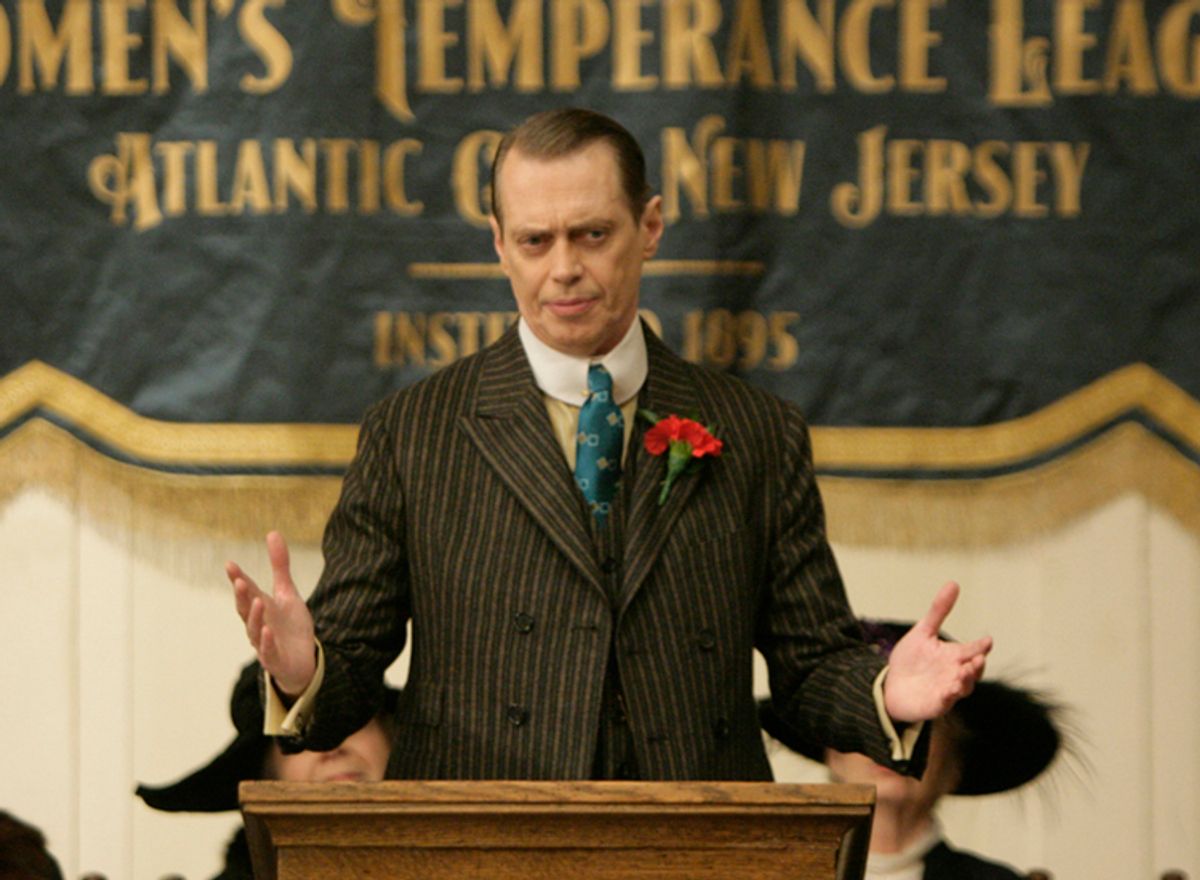 With a $20 million pilot directed by Martin Scorsese and a $10 million ad campaign to back it up, HBO has gone all-in with "Boardwalk Empire," the first of whose 12 episodes premiered last night. Scorsese and creator Terence Winter waste no time putting the expense on screen, in the form of a dazzling set that recreates the Atlantic City boardwalk in the year 1920. But even at the end of 70 minutes, the show feels like it's still getting warmed up.

The central character in Winter's yarn, loosely based on the nonfiction book by New Jersey judge Nelson Johnson, is Atlantic City treasurer Enoch "Nucky" Thompson, a dapper political animal who in the show's first few minutes goes from cheering on the ladies of the city's Temperance League to arranging the first delivery of illicit liquor mere hours after Prohibition goes into effect. The real-life Thompson (or rather Johnson, as Nucky's surname is one of several changes Winter makes to free the show from the strictures of history) was a massive figure, 6-foot-2 with "paws for hands," but Buscemi's Nucky is more of a wheeler-dealer than a gangland bruiser. When he tells someone "I could have you killed," it's hard to know whether to believe him. (The response, "But you won't," is almost superfluous.)

For the most part, "Boardwalk Empire's" first episode busies itself with setting the wheels in motion, introducing its cast of characters along the way. It's a big job, and it results in a handful of clunky scenes consisting of little more than people introducing themselves to one another. There's one relatively graceful exception, as Prohibition Agent Nelson Van Alden (Michael Shannon) attempts to school a slow-witted colleague in the identities of the figures arriving from New York and Chicago for an underworld summit, an invaluable aid to those who can't tell their Arnold Rothstein (Michael Stulhbarg) from their Lucky Luciano (Vincent Piazza). But the graceless mechanics prevent us from sinking fully into the world of the show, and in the parade of briefly glimpsed players, several inevitably come off as caricatures. The worst offender is bootlegger Mickey Doyle (Paul Sparks), who ends every other sentence with the whinnying laugh of a cut-rate psycho. As if that weren't enough, he operates out of the back of a funeral parlor, and the first time we see him, he's cracking tasteless jokes about a female stiff.

The occasion for the aforementioned gathering of gangsters is the dawn of Prohibition, which goes into effect a few hours after "Boardwalk Empire" begins. Elsewhere in the country, people are preparing to do without, but Nucky and his crew, which includes his brother, Eli (Shea Whigham), Atlantic City's sheriff, have arranged that the liquor will keep flowing, albeit at vastly increased prices.

Nucky's facility with a crate of Canadian Club has brought in criminals from across the country: Rothstein and Luciano from New York, Johnny Torrio (Greg Antonacci) and Big Jim Colosimo (Frank Crudele) from Chicago. Rothstein and Luciano represent a new generation of organized crime, the former financially astute (and concomitantally skilled at cards), the latter hot-tempered and amoral, sneering as he cuts his deals. Torrio and Colosimo are old-school, but Torrio sees the money to be made in booze, while Colosimo wants to stick with his current business plan. Remember what happened when Vito Corleone tried to stay out of the drug business? There's a reason that of all the names he's fed, Colosimo's is the one Van Alden's partner can't seem to remember.

Nucky is a ruthless if good-natured businessman — when a rumrunner offers to toast the deal they've just made, in which Nucky came out substantially ahead, he replies, "I got what I wanted; what … would we talk about?" — but he has a soft spot for hopeless cases. As a group, the Temperance League he addresses in the opening scene is just another constituency to seduce with glib patter. (Just as he had his liquor-smuggling operation in place before Prohibition began, Nucky is courting the women's vote before there even is one; woman's suffrage only took effect later that year.) But when one of their number, a destitute, pregnant immigrant named Margaret Schroeder (Kelly Macdonald) visits him in his office, he stuffs her hands full of money and sends her home in his polished blue Rolls-Royce. Nucky's largesse has its roots in fact — Nelson Johnson relates how he would walk down the street stuffing dollar bills into people's hands — but even innocently given money spawns suspicion and deadly consequences. Her husband, who doesn't seem to have any trouble finding enough booze to work himself into a drunken rage, beats her until she miscarries, convinced that she's been selling her body to offset his seasonal unemployment.

Unintended consequences bear even more toxic fruit in the scenes dealing with Nucky's protege, a young veteran of the First World War named Jimmy Darmody (Michael Pitt). Jimmy has been worshiping at Nucky's knee since the age of 12, but his three years in the military have set him back. Not only does he break off a Princeton education he is now reluctant to resume, Nucky treats his decision to serve as a personal affront, almost a betrayal. (It's not spelled out, but the implication is that Nucky could have used his influence to exempt Jimmy from the draft, or perhaps his resentments just aren't subject to reason.) Jimmy bristles at being named a ward leader's "man Friday" rather than a ward leader himself. "All I want is an opportunity," Jimmy says to him, his voice pitched between determination and petulance. "This is America, ain't it?" Nucky shoots back, his patience thinning. "[Who's] stopping you?"

Jimmy takes Nucky's advice to heart, albeit not in the way his mentor intends. Joining up with another ambitious flunky, a beaming, scarfaced enforcer from Chicago named Al Capone (Stephen Graham) to hijack Nucky's first whiskey shipment. (Technically, the whiskey is Rothstein's at this point, although he's already won back his $60 grand payment and much more at one of Nucky's casinos.) In a bravura sequence heavily reminiscent of "The Godfather" and "Goodfellas," Scorsese intercuts Jimmy and Al's hijacking with Van Alden's men approaching an initially unseen target, actions that turn out to be parallel but unrelated. The cracking branches that prompt Jimmy and Al to unload their shotguns, transforming a bit of intracriminal larceny into a four-way murder, turn out to be the product of a skittish deer (briefly glimpsed in the opening flash-forward). Van Alden and co. are closing in not on the hijackers, but on Mickey Doyle's bootlegging operation.

Earlier, Van Alden hauled Jimmy in for questioning, offering him an opportunity to join the "godly pursuit" of shutting down bootleggers. But Jimmy used Van Alden to further his own agenda, distracting the agents while also getting revenge on Doyle, who previously embarrassed Jimmy by offering him a formaldehyde-laced glass of whiskey in full view of his boss. Jimmy's personal grudge and his business interests dovetail neatly, a theme that repeats itself in the pilot and one I imagine we'll see much more of as the series progresses.

Only two murders to go. After hearing of Margaret Schroder's miscarriage, Nucky sends his brother the sheriff to pick up her husband, which is the last anyone will be seeing of him. As Eli and his helper beat Margaret's husband to death, Al Capone drives the hijacked liquor to Chicago and Big Jim Colosimo is shot dead in his restaurant, removing any obstacle to the Chicago mob's embracing bootlegging with both arms. (Although Capone is sometimes thought to have killed Colosimo himself, Winter clearly shows another member of Torrio's mob doing the deed.) To cap the sequence, we see the body of Margaret's husband disgorged from a fishing net as a crowd of tourists watch from the pier, and a radio broadcast informs us that he has been sought as a suspect in the murders committed by Jimmy and Al. That clearing his protege of a quadruple murder and discouraging the authorities from looking further into the crime also allows Nucky to get revenge on a wife-beating scumbag is icing on the cake, a nifty twofer pulled off by a practiced operator. Whether Nucky has put his political acumen at the service of a personal vendetta or vice-versa is a question we'll likely have occasion to ponder for weeks to come.

Before I wrap up and move the discussion to the comments, I should say a word about one of the most obvious themes in "Boardwalk Empire": the notion of reinvention. It's no accident that the very first thing we see Nucky doing is lying about his past. This is a story about self-made men, about individuals, and a country, intent on building themselves from scratch. It's laughable when Micky Kuzik announces he wishes henceforth to be known as Doyle, burying his Eastern European heritage under an assumed name. But how different is that from a nation suddenly deciding that its citizens can't drink, outlawing a vice that, as a mock funeral for the hard stuff points out, goes back before the birth of Christ?

Reinvention is central to the American mythos, the story of a country where (almost) everyone comes from somewhere else, and is free to start again on its shores. When Margaret apologizes for the thickness of her accent, Nucky responds, "We are all immigrants, are we not?" Like HBO's "Deadwood," "Boardwalk Empire" sets itself out as a story about the making of (a) civilization, and how the boundaries between law and lawlessness don't always fall where you think they might. America may be a place where people can remake themselves, but sometimes it doesn't take, and the process isn't always pretty.