Carter: Kennedy was drinking before 1980 snub 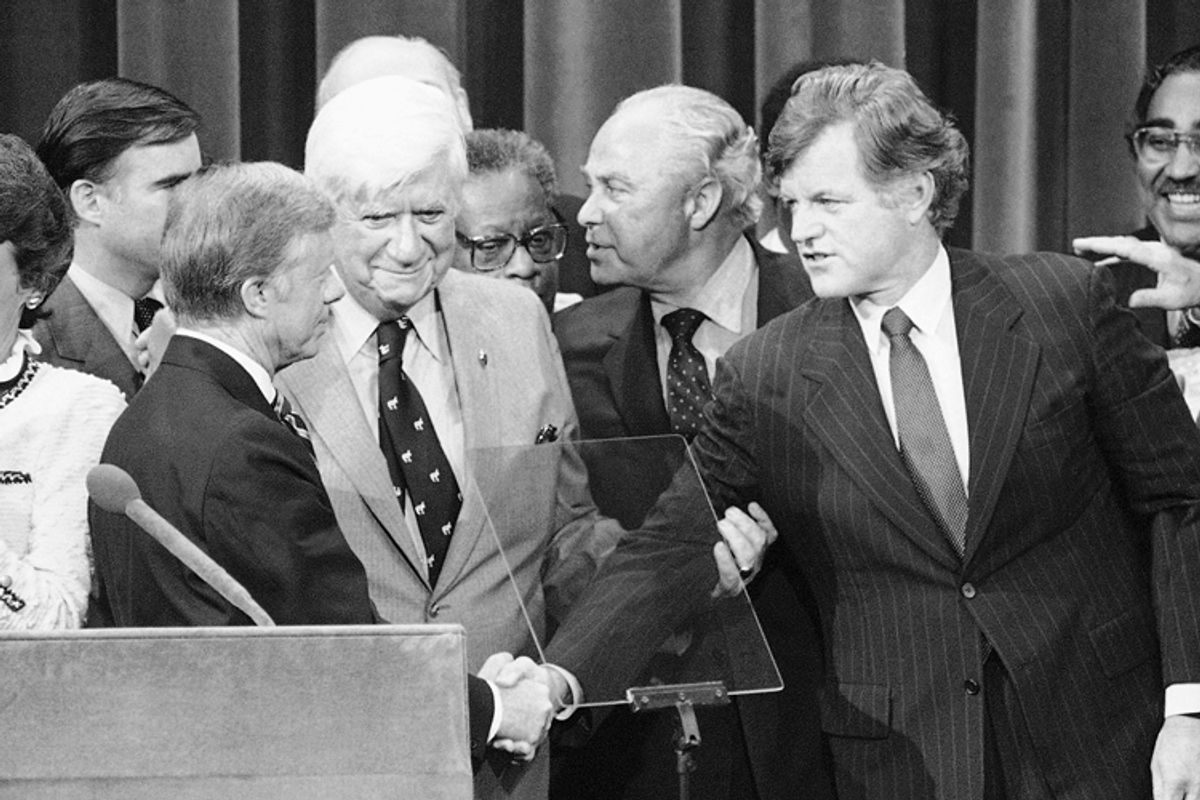 Jimmy Carter, left, shakes hands with Sen. Edward Kennedy on the podium at the Democratic National Convention in 1980.
--

This week marks the publication of Jimmy Carter's private journal of his presidency, "White House Diary." The entries are often brief, but Carter does offer an interesting account of one of the most widely discussed moments of his doomed 1980 reelection effort: Ted Kennedy's apparent snub of him on the final night of the Democratic convention in New York, just after Carter had delivered his acceptance speech.

"Afterward," Carter writes in his diary, "Kennedy drove over from his hotel, appeared on the platform along with a lot of other people, seemed to have had a few drinks, which I probably would have done myself. He was fairly cool and reserved, but the press made a big deal of it."

They sure did -- and for good reason. Kennedy's challenge of Carter for the '80 nod was unusually bitter and protracted. Even though Carter won twice as many delegates in the primary and caucus season, Kennedy fought all the way to the August convention, attempting to convince delegates to support a rule change that would have allowed them to vote their conscience on the first ballot -- instead of being forced to cast a ballot for the candidate they'd been pledged to during the primary season. Only when this effort failed did Kennedy back down and end his campaign (with what was probably the best speech of his career). So it was only logical that the press would watch the body language closely when the two men came together onstage after Carter's acceptance speech two nights later -- and Kennedy's discomfort was obvious. As the Washington Post reported it:

When Kennedy did arrive, wearing that familiar tight-lipped smile his traveling press corps has come to call "the smirk," he strode into the crowd of Democratic officials already on the podium, gave Carter a perfunctory shake of the hand, and walked away to the side of the platform.

There followed a comical ballet in which Jimmy and Rosalynn Carter and House Speaker Thomas P. (Tip) O'Neill Jr. (Mass.) all tried futilely to lead Kennedy back to center stage for an arms-up pose with the president.

When Kennedy went to the left side of the platform to raise a fist toward his Massachusetts delegation, Carter made a beeline to join him and struck the same pose. But Kennedy's arm had come down a split-second before Carter's shot up.

You can watch some of Kennedy's snub of Carter in this video:

Carter has already rasied eyebrows while promoting his diaries. In a "60 Minutes" segment that aired over the weekend, he told Lesley Stahl that "we would have had comprehensive healthcare now, had it not been for Ted Kennedy’s deliberately blocking the legislation that I proposed" as president. "It was his fault," Carter added. "Ted Kennedy killed the bill."