Sally (and Betty) rebel, Peggy and Faye draw lines in the sand -- and Joan falls to pieces 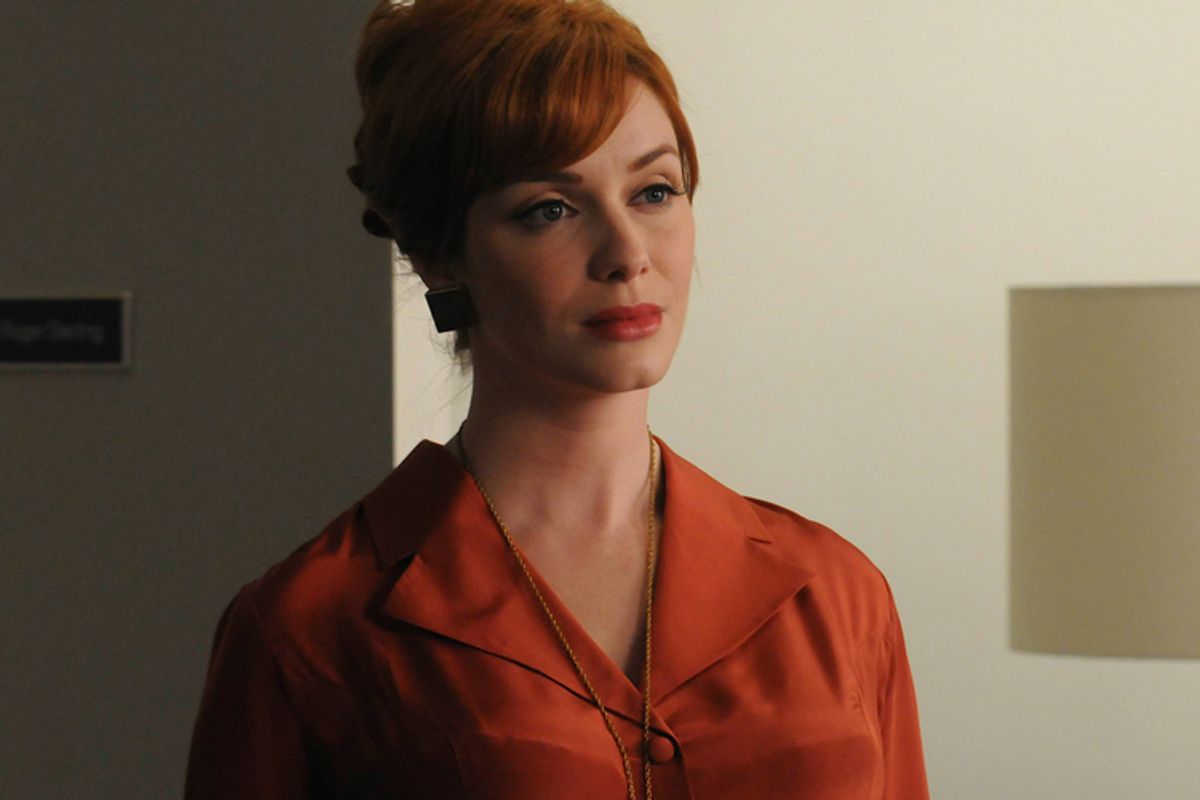 How do you find your place in a world that demeans, underestimates and ignores you, then treats you like a punch line when you're gone? This is the central question of "Mad Men's" "The Beautiful Girls," but as always, the answers aren't very clear. Whether you draw lines in the sand, stomp your feet and act on principle, or surrender, whimper and weep, then try desperately to regain your footing, you'll still end up compromised. You either operate completely outside of the social norms and navigate the world around you with total disregard for what other people expect of you (like Peggy's friend Joyce), or you're constantly pushed into a subordinate role (like Joan, Peggy and Faye, sharing an alienated elevator ride at the end of the episode).

This week we see what women give up to get what they want. Peggy compromises her principles (yet again) in order to remain in a position of power; Sally gives up her own safety and security and endangers her relationship with her mother in order to be closer to her father; Faye surrenders to Don's charms and to his innate sense of privilege in order to have some love in her life; and Joan gives in to Roger's relentless pursuit once it's clear that he's the only man (or person, for that matter) who offers her real support and comfort. Which of these women is honoring her ideals, and which is surrendering some crucial part of herself just to satisfy other people's expectations? "It's a business of sadists and masochists," says Mrs. Blankenship to Peggy, "and you know which one you are."

Although the overarching theme of liberation vs. servitude was, at times, a little too omnipresent, echoing through every scene with the subtlety of a tuba honking away in the corner of a bar, there was still plenty to love in this episode, from Sally's big act of rebellion – and Betty's, whose response to Don telling her to "take some responsibility" was to force him to do just that – to Peggy's small act of drawing a line between the personal and the political. Of course, both of these gestures -- taking a stand, trying not to blur personal choices with politics -- are harbingers of the cultural turmoil that's just around the corner. Both Sally and Peggy show us how tough it is to stand up for yourself and get what you want at the same time. One minute you're putting your foot down, the next minute you're making your dad his own twisted version of a good breakfast, just substitute the matriarchal Mrs. Butterworth with a big bottle of rum (shaped as a pirate? Couldn't tell, but that would be fitting).

As nice as it is to see Don fall for a woman who's strong and smart, he casts Faye in a submissive role almost immediately, not only asking her to take care of his daughter (Why her?) but asking her to soothe Sally out of her angry state as well. Faye is embarrassed by how bad she is with kids, and while she thinks the whole thing must be a test, she overestimates him. The truth is, he forced that role onto her unthinkingly, because that's what he does with women. Once she points it out, even though she tries to angrily suggest that choosing her career over children is perfectly valid, even though he soothes her, there's something strained in Don's face that suggests that both her vulnerability and her inability to play a traditional mothering role make her less appealing in his eyes. He expects her to be formidable and a nurturer -- even though he doesn't remotely manage this tightrope walk himself.

Don's shortcomings, in fact, are best summed up by his exchange with the woman who rescues Sally from the train. "Men never know what's going on," she grumbles at him. "I offered you money and I said thank you," Don replies, summing up his entire approach to women, from his whore to his former secretary Allison. In spite of his best intentions (and his very real friendship with Anna), Don's ability to genuinely engage with women -- on an intimate level, as equals in the office, or in a father-daughter relationship -- is limited, and it hurts him nearly as much as it hurts them.

Which brings us to the one relationship that breaks out of this rather impoverished mold -- emotionally, at least. As neatly as Joan and Roger's ill-fated pairing fits into the larger picture of women being forced to yield their own better judgment for the sake of men, something between these two really exists on its own magical planet. For all of the demeaning clichés and power imbalances inherent in an affair between a secretary and an executive, Joan and Roger have always been the real star-crossed lovers of "Mad Men," and it's tough not to cheer when they wind up in each other's arms.

Although he presents himself as an empty shell of a man, drinking himself into oblivion over the irrelevance of his life's work and the frustrations of his new marriage to what Henry Francis' mom might call a "silly woman," Roger always comes alive when Joan is around. With Joan, Roger shows us his best side -- his gentleness, his protective instincts, his sense of humor -- but he's also vulnerable enough to admit that he's feeling lost. He may be trying to seduce her every second of every day, but Roger's seductions, at least when it comes to Joan, feel painfully sincere. While Don jokes to Faye when he leaves her, "I'm taking everything interesting with me," Roger never treats Joan as anything but the most important and interesting person in the room. Sure, we've seen how Joan has always known just how to appeal to Roger's sense of himself as a man, conjuring up the cooing of Marilyn Monroe with far less of Monroe's uncertainty or fragility. But we also have a sense that, despite appearances, Joan's appeal for Roger doesn't depend entirely on the fact that she never fully belongs to him. That's obviously part of it, of course ("He won't be happy 'til he turns you out," as Joyce puts it to Peggy). If any woman is a pot, it's Joan, and what could you want more than a really beautiful, expensive pot that doesn't belong to you anymore? Nonetheless, we can see that Roger's love for her transcends her usefulness or her sex appeal or even his interest in conquest.

This ultimately human take on Joan and Roger points to one of the real strengths of "Mad Men": even as every little line of dialogue and every throwaway scene echoes the central premise and reflects some central conflict inherent to the times, each character is still treated as a human being. Just as no human being consistently represents one stance or another, no character on "Mad Men" is entirely flattened out for the sake of making a point. Likewise, there are some bonds on this show that clearly exist between two human beings (as opposed to two characters), bonds that have the power to sidestep the norms of the time: there's Don and Anna, Peggy and Don (most notably in "The Suitcase") and, finally, Roger and Joan.

And man, the slow burn of repression and self-abnegation on this show really makes you exalt in a real pair of soul mates, sharing their secrets, at last. It's impossible not to love Joan and Roger together, no matter how imperfect the circumstances might be. I love how Roger rises to the occasion when Joan is around; I love how he handles both the news of her husband being sent to Vietnam and the mugging perfectly. Sure, he's invigorated by the sense that he's needed, that she's someone who needs saving. But she does need saving -- as good a pot as Joan is, she's also a damsel in distress at some essential level. She paints herself into that corner by casting herself as sex kitten/schoolmarm at the office, by neglecting to address matters directly or take what's rightfully hers, by playing her cards so close to her chest, by refusing to make friends or admit it when her personal life is far from perfect. Nonetheless, Joan is supremely capable and strong and therefore hard not to admire. Remember that great scene last season when, as Greg is falling apart, Joan impresses his colleague's wife with her smooth, calm, very mature ability to handle anything? The wife rightly judges Joan as the real star and force to be reckoned with in that marriage.

We know that Joan deserves someone who's enthralled by her particular powers, and as backward as Roger can seem, it really does take a guy as old-fashioned as him to do the job right. If those two together represent all of the outdated, regressive aspects of coupling in the '50s, they also reflect the deeply romantic aspects of those days as well. Like any soul mates, separately, Joan and Roger are two halves of a whole. Together, they make perfect sense. His unfocused longing finds focus in his desire and in his role as protector; her reserve and her manipulative ways transform into strengths in his eyes. She can feel proud of her feminine wiles (instead of encountering them as liabilities, as she does in the office these days) and she can relish her own capability (of which Roger is also in awe, since he's about as capable, in day-to-day life, as a small child).

Even though, through Mrs. Blankenship, we see what happens to a woman who spends her entire life serving men, Joan is only headed down that path if she does the so-called right thing and stays loyal to her husband. "I feel something. And I know you do, too," Roger tells Joan, hinting at what we see, week after week: The two of them can't feel much without each other. Without Joan, Roger is a morose drunk destined to die in the office, and without Roger, Joan is a dutiful zero. This series isn't big on happy endings, but somehow it's tough not to hope that Roger and Joan eventually make a sweet old-fashioned nest and grow old together. Even if it never happens, there's something gratifying about just wanting that for them, or simply recognizing how lovely their somewhat archaic roles can be, in spite of the obvious tides of change propelling all of these characters toward the tumult of the late '60s.

In spite of the fact that we should know better, we can't help but hope that Roger's words -- "She died like she lived, surrounded by the people she answered phones for" – won't apply to Joan, in the end.