Obama: The Tea Party is blaming the wrong "culprit"

The president makes it through a town hall meeting without anyone calling him a socialist. No wonder he's smiling 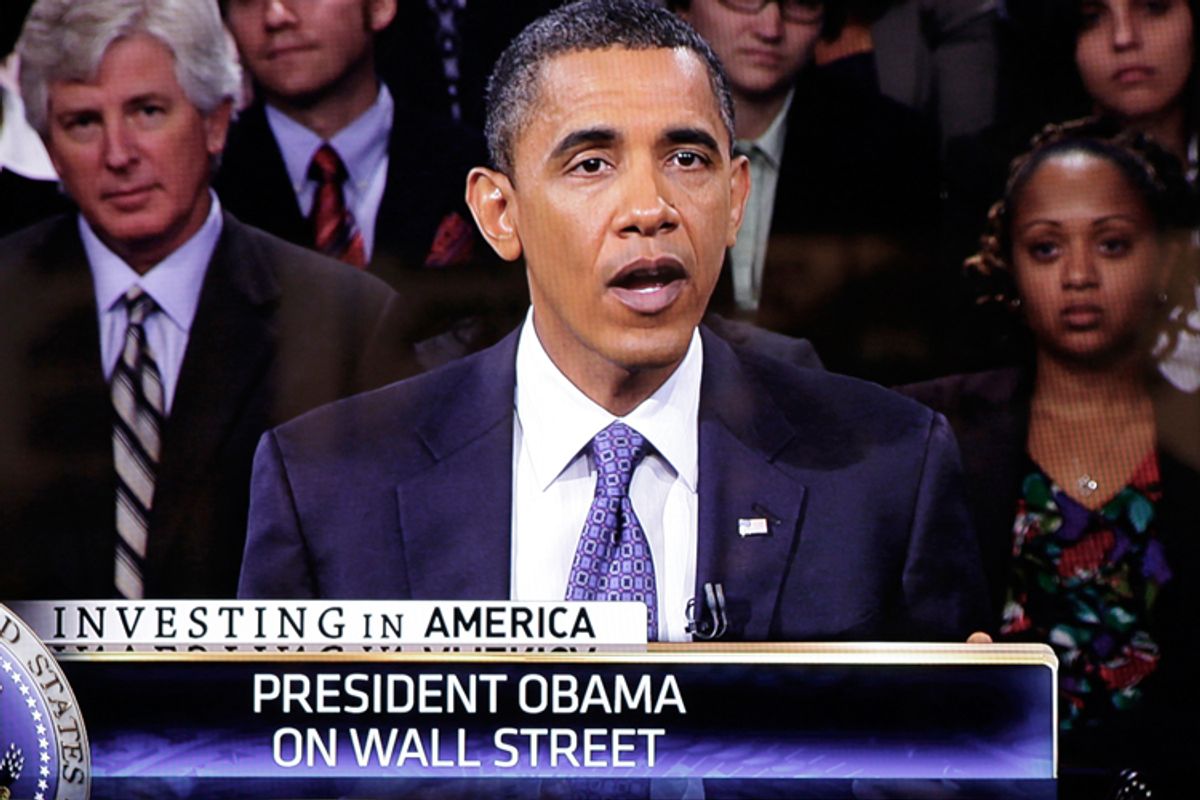 If you're looking for a reminder of why Barack Obama trounced John McCain in the 2008 presidential election, find a recording of Monday's town hall meeting on the economy, televised by CNBC, and watch it from beginning to end. The president excels in the town hall format. He's quick on his feet, has command of the issues, and in general is able to make a much more compelling case for his administration's record than can his own press secretary, any member of his Cabinet, or any other prominent Democratic politician.

Listening to the audio feed of today's town hall, I was reminded of Obama's bravura performance before the House Republican caucus back in January. When, at the end, he responded to host John Harwood's reminder that time was up with a quick "but I'm having so much fun," the president sounded sincere -- even though the disappointment directly expressed by questioners who described themselves as his supporters must have been a hard pill to swallow. But even that was probably easier to take than the difficulties inherent in his day job -- figuring out how to govern a country in which the political opposition has convinced a sizable minority of the electorate that the president is a "Kenyan anti-colonialist" with a secret plan to impose Sharia law on the United States while outlawing the free market.

In the hour-long town hall the president made another strong push for ending the Bush tax cuts for Americans making more than $250,000 a year and he adroitly resisted the assertion by one hedge fund manager that Wall Street was being "whacked like a pinata" by noting first that Main Street had been hammered much harder than Wall Street, and second that most people outside of Wall Street felt that he has been too soft on the financial sector. He sounded rueful -- how is it possible to be simultaneously anti-business and in Wall Street's pocket?

When one questioner asked him, what, practically, he had achieved to make her family's life better, he responded with a string of accomplishments: better access to student loans, restrictions on abusive credit card company practices, health insurance for people with preexisting conditions. When Harwood asked him to respond to the Tea Party's concern about "out-of-control" spending, he was particularly strong.

"I think they are misidentifying who the culprit is," said Obama. "The emergency steps we are taking now are not the problem long term. [The real problem is] two tax cuts that weren't paid for. Two wars that weren't paid for. A population getting older. We're all demanding services. But our taxes have been going down. Our tax rates are lower now than Ronald Reagan, much lower than Eisenhower."

Are the Tea Partiers willing to cut veterans' benefits or Medicare or Social Security? Or do they want to continue to live in the Republican never-never land where you keep cutting taxes while expanding spending?

It's been clear for several weeks now that the White House has decided to unleash Obama with a vengeance. With good reason -- he's the best defender of his own agenda that the Democrats have got. But it's also reasonable to ask whether anything substantive is being achieved with this last-minute rollout. Unemployment remains brutally high and economic growth is slumping again and substantial portions of the electorate, on both the left and right, are skeptical (albeit for completely different reasons) of his two signature achievements, healthcare reform and bank reform. Meanwhile, Republicans are campaigning on a platform predicated on rolling back the very accomplishments the president is touting. Interpretations of Obama's record already appear mentally and emotionally set in stone. Watching Obama, my main takeaway was to wonder why he hasn't been making the case for himself much more often, and why he didn't start much, much earlier.

Barack Obama How The World Works