After a tape of her claiming to have dabbled in witchcraft surfaces, the Delaware tea partier stands up CBS and Fox 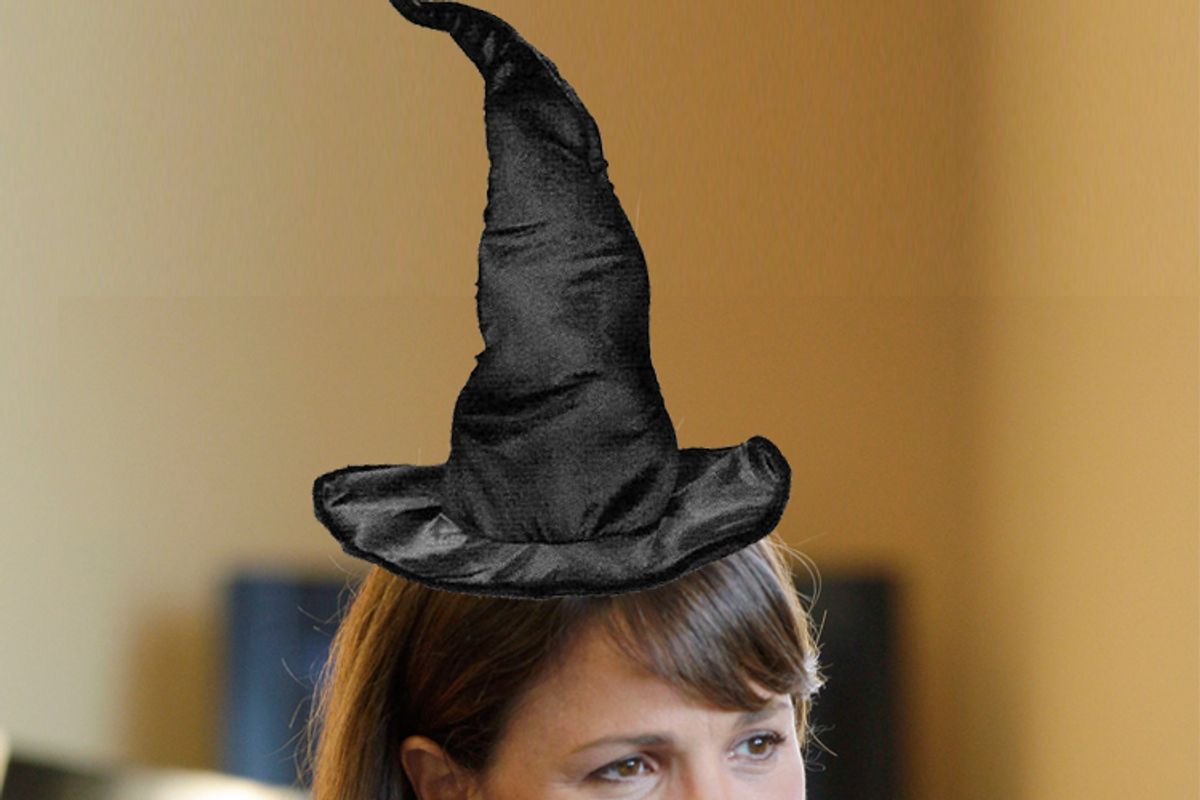 Christine O'Donnell had the time to make 22 "Politically Incorrect" appearances back in the 90s, but she couldn't make it to "Face the Nation" yesterday. O'Donnell canceled on the CBS Sunday show, and on "Fox News Sunday," at the last minute over the weekend. The cancellations happened quite soon after Bill Maher played a clip of O'Donnell on his old show claiming to have dabbled in "witchcraft."

But witchcraft and a history of saying hilarious things during the Clinton administration had nothing to do with it, of course. Christine O'Donnell cancelled on national TV because she was already booked to go to a picnic.

Chris Wallace of Fox said on his show that a campaign spokesperson initially told his show late Friday that Ms. O’Donnell was backing out because she was “exhausted.” On Saturday, he said, Ms. O’Donnell called him and said, “I got triple-booked. I had been invited to go to church and then a picnic. I have to keep my priorities to Delaware voters.”

O'Donnell said she needed to stay in Delaware to campaign, apparently not realizing that a previous occupant of the seat she's running for used to take an express train back and forth all the time.

What was the context of the horrible embarrassing clip that ruined O'Donnell's national roll-out? Well, she was arguing against the celebration of Halloween.

"I'm not making this stuff up," she says, before telling us about a "first date" that ended at a "Satanic altar." (Wiccans don't believe in Satan, for what it's worth. She was perhaps just on a date with a metalhead.)

It used to be unprecedented for a candidate to bail on a Sunday show appearance, but now there is very prominent precedent: Rand Paul, who canceled on "Meet the Press" after his own surprising primary win earlier this year. He was hiding from comments he'd made that week, not a decade ago, but basically the stories are remarkably similar.

O'Donnell is already attempting to laugh off the witch business, but with the amount of attention the weird tale is getting it could end up hurting her more with her conservative base than with the liberals who are laughing at her. I mean, knowing she's a former goth kid is kind of endearing, right? (I, too, "dabbled in witchcraft" in high school, by which I mean one time I watched "Labyrinth" with this sophomore girl from my chemistry class.)

Bill Maher promises more clips to come. And while I'm sure Chris Wallace is disappointed, I imagine O'Donnell will continue to make Fox appearances. They'll just be with Hannity, instead.