The new Oracle: Bigger and badder than ever

The software giant has solidified its central role in the technology firmament. Is it becoming another Apple? 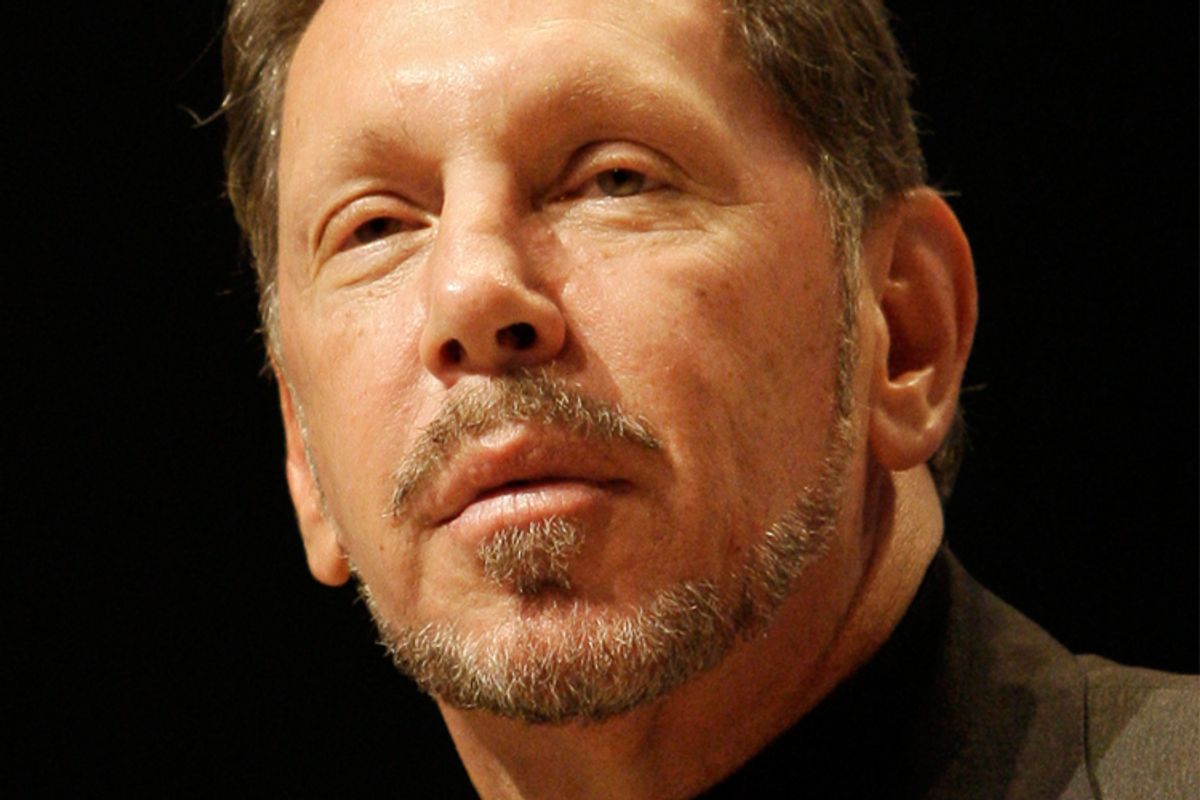 Apart from being accused of fraud by the U.S. Justice Department, it's been a pretty good year so far for Oracle Corp. Let's see. Oracle finished its acquisition of Sun Microsystems. A sailing team co-sponsored by Oracle won the America's Cup. Earnings are up. So when more than 40,000 people from around the planet showed up for the company's annual OpenWorld conference in San Francisco, founder and CEO Larry Ellison wasn't entirely out of bounds to preen a bit on the Moscone Center stage.

Ellison and his company cast an outsized shadow in Silicon Valley, but they're much less known outside. The reason is what they've been selling for decades: products that are aimed at what they call "the enterprise" in tech and financial circles -- enterprises like governments, universities and an assortment of big and smaller companies. The flagship for years was database software; a database is, essentially, a place where people store their digital data in various ways so they can easily retrieve and manipulate it later.

In recent years, however, Oracle has been on an acquisition binge. Among the more notable purchases were PeopleSoft, which sold the leading enterprise products for managing things like customer relations and personnel, and Sun, a pioneer in high-end server hardware and software. There's a more than reasonable likelihood that the computers processing your payroll check use Oracle software, but it's not nearly so likely that your IT department has standardized on Sun/Oracle hardware unless you are in a few specific industries where Sun had major market share.

The Sun purchase was a fascinating shift for Oracle, which had for the most part been a software company, creating products that ran on a variety of hardware from the leading computer and server makers including Sun, IBM, HP, Fujitsu and Intel-based manufacturers. All of a sudden, with Sun in the fold, Oracle had gone vertical -- systems that include proprietary hardware and software -- and it was now competing with the companies that were its partners. This is nothing new in Silicon Valley, where businesses compete and cooperate ("co-opetition," as some call it), but it has changed Oracle's focus in some ways that have to make the other hardware companies nervous. How sure can they be anymore of their partner's devotion to the long-term success of their collaboration?

Oracle has adoped Sun's goal of taking market share away from IBM and the other big-iron companies, and why not? No one seems to need less computing power, and many of the large enterprises of the planet like a soup-to-nuts approach. Oracle's Sun-based offerings include the popular Exadata series of machines; on Monday, new co-president Mark Hurd, late of HP in a corporate sicko soap opera, announced new models with lots of advanced features.

But Ellison spent much more of his time Sunday talking about what's obviously going to be a big-deal product for Oracle: the Exalogic line of machines aimed at the latest industry trend: cloud computing. Grossly oversimplified, this is Internet-based computing where users share resources that can live anywhere, as opposed to on your desk or in your company's server room. Meanwhile, Oracle is merging the various software products it's developed and bought into a mega-offering it calls Fusion, which will run on a variety of computers but, as you're beginning to guess, will probably run best on Oracle's boxes.

The more I heard him emphasize his company's new focus on merging hardware and software, however, the more I heard an echo of a company run by one of Ellison's longtime best friends, Steve Jobs. This is precisely the approach Apple takes with its products, hardly any of which are aimed at the enterprise: a tight integration of the machines and the code. If Ellison wants to be the Apple of the enterprise, he's set out an ambitious goal. This will remain interesting to watch.