The underrated genius of Steve Buscemi

He may seem like a strange choice of central star for HBO's new "Boardwalk Empire," but he's utter perfection 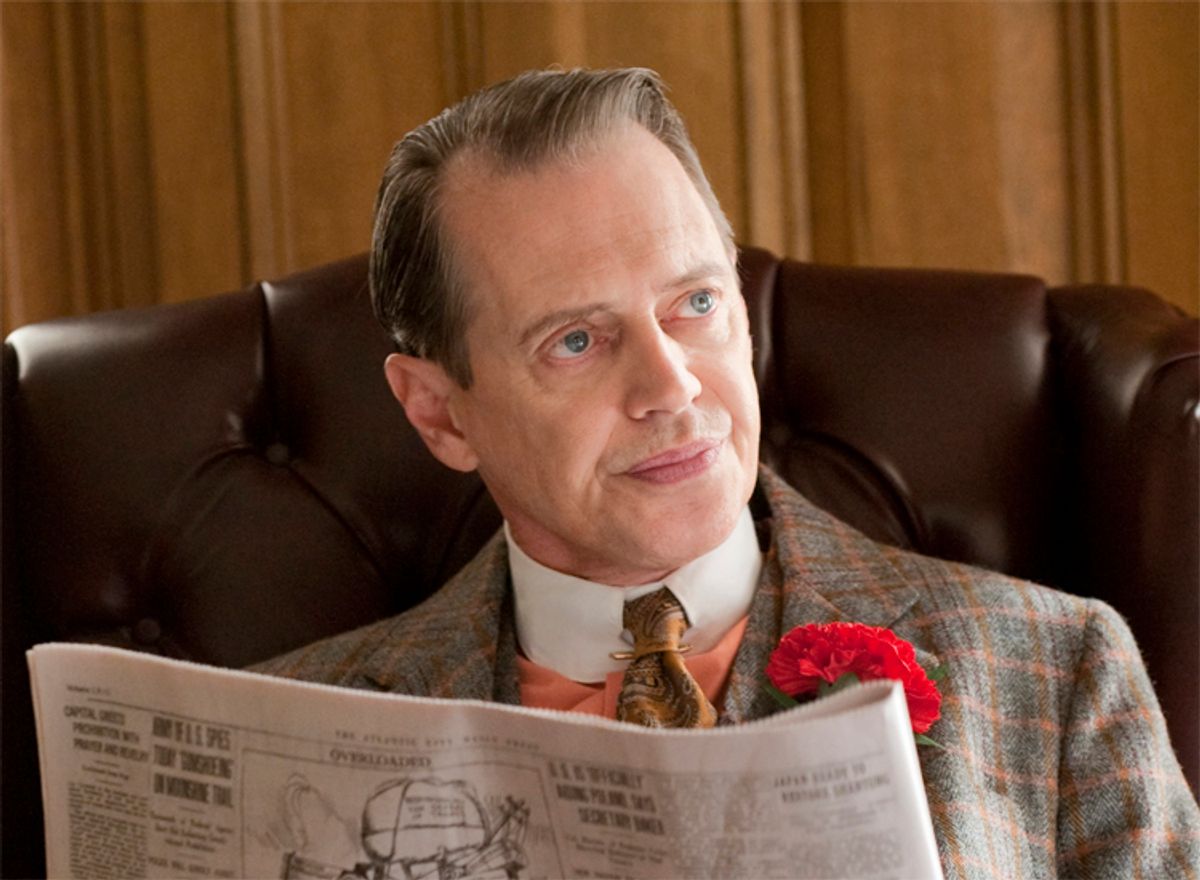 Starting with "The Sopranos," HBO has specialized in a certain type of dramatic series: a sprawling, overpopulated show about crime and morality, awash in testosterone, propelled by elaborate schemes and counter-schemes, punctuated by murders and funerals. At the center of these shows you'll usually see one or more actors of a particular type: intense, deep-voiced, fearsomely macho. Think James Gandolfini in "The Sopranos," Ian McShane in "Deadwood," or Dominic West, Idris Elba and Wood Harris in the first few seasons of "The Wire."

On "Boardwalk Empire," a new HBO gangster drama set during Prohibition, the alpha dog role is filled by … Steve Buscemi?

Buscemi doesn't fit the profile. This slender, reedy-voiced character actor rarely does. Yet on "Boardwalk Empire," as is so often the case, he ends up seeming perfectly cast, giving the part what it probably called for on the page, plus a mix of cynical wisdom, self-loathing, droll humor and expert judgment that deserves its own adjective: "Buscemian."

In "Boardwalk Empire," Buscemi plays Enoch "Nucky" Thompson, the treasurer of Atlantic City in the early years of Prohibition, and the secret boss of a criminal nexus that directs the flow of illegal booze throughout the Northeastern United States. In the pilot, directed by Martin Scorsese, Buscemi makes his entrance as an honored guest at an Atlantic City temperance union meeting. In this introductory scene, there are no obvious tip-offs that he's anything other than the man the ladies see standing at the front of the room delivering a heart-wrenching anecdote about a family stranded during the blizzard of 1888. He talks quietly and matter-of-factly, as if he's just another humble public servant. Nucky recounts how the family patriarch, a drunk, deserted his wife and children in search of booze, leaving the family to fend for itself. The eldest boy rose to the occasion, feeding his mother and siblings three wharf rats that he clubbed to death. The temperance ladies gasp. Nucky tells them the family survived. "And the little boy?" he says. "Well, the little boy speaks to you tonight from this very podium." The room bursts into applause, but Nucky doesn't bask in it. He accepts the crowd's love reluctantly -- as if, after all these years, the event were still a source of pain rather than pride.

As it turns out, the story is baloney. Buscemi's delivery sells it by not trying to sell it. And that's Buscemi's stock-in-trade: compulsively watchable performances that rarely strain after effect. Although some may miss the Godzilla-rising-out-of-the-depths screen presence of a Gandolfini or McShane, I think Buscemi brings a different but equally convincing energy to the role. He's the alpha dog as basset hound.

Nucky is a high roller and a night owl. He presents himself as a pillar of the community while hobnobbing with visiting Chicago gangsters in a hotel stocked with hookers and booze. But Buscemi plays him as plausibly harmless -- perhaps even as a man who'd indulge his latent decency and kindness more often if he weren't afraid that the hardcore gangsters in his orbit would read it as a sign of weakness. When Nucky, a childless widower, takes an interest in an abused pregnant wife named Margaret Schroeder (Kelly MacDonald), and Margaret seems unaware of the unofficial aspects of his influence, we think not that she's naive or stupid, but that Nucky is good at putting up a false front. Buscemi tends to fool the viewer, too. Looking at that face and hearing that voice, you can't help thinking him harmless, even nerdy, even after you've seen him shtupping his buxom gold digger girlfriend or slamming a man's head against a tabletop.

"Boardwalk Empire" is just the latest example of Buscemi getting cast in a role you wouldn't normally picture him playing, then taking possession of it so decisively that you can't imagine anyone else playing it. He's the actor as Swiss Army Knife: Whatever a story needs, he's probably got it. Buscemi has appeared in more than 100 films and TV programs, creating the sort of dependable yet varied utility-infielder character acting career that was more common in the golden age of the Hollywood studio system than it is today. He is always immediately recognizable as Steve Buscemi, rarely playing parts that require him to disguise his face or voice (as if such a thing were possible). But he rarely recycles performances, even when he seems to have been typecast in a particular mode that he's mastered before: the fast-talking criminal, for instance, or the philosophical outsider, or the small-town loser.

Buscemi was compellingly eccentric in two early Coen brothers movies, "Miller's Crossing" (playing Eddie Dane's chatterbox lover, Mink) and as the bellhop in "Barton Fink" ("C-H-E-T ... Chet!"). And he was operatically pathetic as the "kinda funny-lookin'" Carl Showalter, one of the kidnappers in the Coens' "Fargo." Carl was the self-proclaimed brains of the operation -- a raging schmuck who buries ransom money in a snowy hole in the ground and marks it with an ice scraper while staunching a gunshot wound to his face with a wad of paper towels. He's the blue-collar dopplegänger of William H. Macy's white-collar criminal in the same film: a mediocrity that thinks the world owes him something. His smug entitlement and impotent anger are by turns disturbing, sad and hilarious. Buscemi lets you see the character's insecurity and pipsqueak rage. Carl probably spent half his youth getting stuffed into gym lockers by bullies; now he's a murderous felon, but when he gets on the phone with his patrons and shrieks about how things are going to be, he still can't inspire fear. No wonder he's cranky.

Now look at Buscemi just one year later playing Donnie in the Coens' bowling noir "The Big Lebowski" -- a good-natured dullard treated as a human doormat by his two best friends, Walter Sobchack (John Goodman) and Jeff Lebowski (Jeff Bridges). The aggrieved, bloodthirsty edge he displayed in "Fargo" -- and as the monologue-spouting, tip-hating Mr. Pink in Quentin Tarantino's first movie, "Reservoir Dogs," and in so many crime films that desperately wished they were "Reservoir Dogs" -- is nowhere to be seen. He's just Donnie, one of those kindhearted punching bags that his friends don't appreciate until his ashes are getting caught in someone's beard.

He delighted kids as the voice of Templeton the Rat in the 2006 "Charlotte's Web" and the treacherous Randall Boggs in "Monsters, Inc." He fit right into the pioneering AIDS drama "Parting Glances" as well as Abel Ferrara's gonzo gangster picture "King of New York" (as Test Tube) and the sad-sack indie comedies "In the Soup" and "Living in Oblivion" (as a director being overwhelmed by the egos of his cast and crew). He fit right into some ostentatiously "colorful" roles in glossy-trashy action pictures -- notably "Con Air," in which he played Garland Greene, a serial killer who looks like a wet mouse, but is so fearsome he has to be restrained with a Hannibal Lecter mask. An actor who can convincingly play both Garland Greene and the definitive record-geek-suffering-a-midlife-crisis in "Ghost World" is an actor of formidable skill.

Buscemi is a sharp yet unassuming director, too. His films and TV episodes are built on a bedrock of John Cassavetes-style heightened naturalism, but his sense of composition is precise, classical, in some ways conservative, yet almost always just right. Rent his 1996 debut film, "Trees Lounge," for an example of a New York indie ensemble comedy that adds up to more than the sum of its parts. It offers the can't-miss comic spectacle of a down-on-his-luck Buscemi driving an ice cream truck through the suburbs, and boasts one of the most perfectly paired opening and closing sequences in '90s indie film – the final close-up is surprisingly powerful.

If you're in the mood for something harder, try Buscemi's second film, the prison drama "Animal Factory," which is filled with arresting performances by actors cast wildly against type (including Mickey Rourke as a toothless transvestite named Jan and Tom Arnold as a terrifying sexual predator). Or revisit his sterling work for various series, notably "The Sopranos" (among other great episodes, Buscemi directed "Pine Barrens," the one with the Russian in the woods, and "Mr. and Mrs. Sacrimoni Request," about imprisoned mobster Johnny Sack getting a day pass to attend his daughter's wedding). He directs like he acts: purposefully and inventively but without fuss. He thinks in shots without calling attention to shots, and he always seems to keep the endgame in mind. Where are we going? How will we get there? Where are we now?

The philosophy displayed in Buscemi's work as both actor and filmmaker reminds me of a passage from David Mamet's back-to-basics manifesto "True and False: Heresy and Common Sense for the Actor." "Preoccupation with effect is preoccupation with the self," Mamet writes, "and it is not only joyless, it is a waste of time ... Art is an expression of joy and awe. It is not an attempt to share one's virtues and accomplishments with the audience, but an act of selfless spirit."