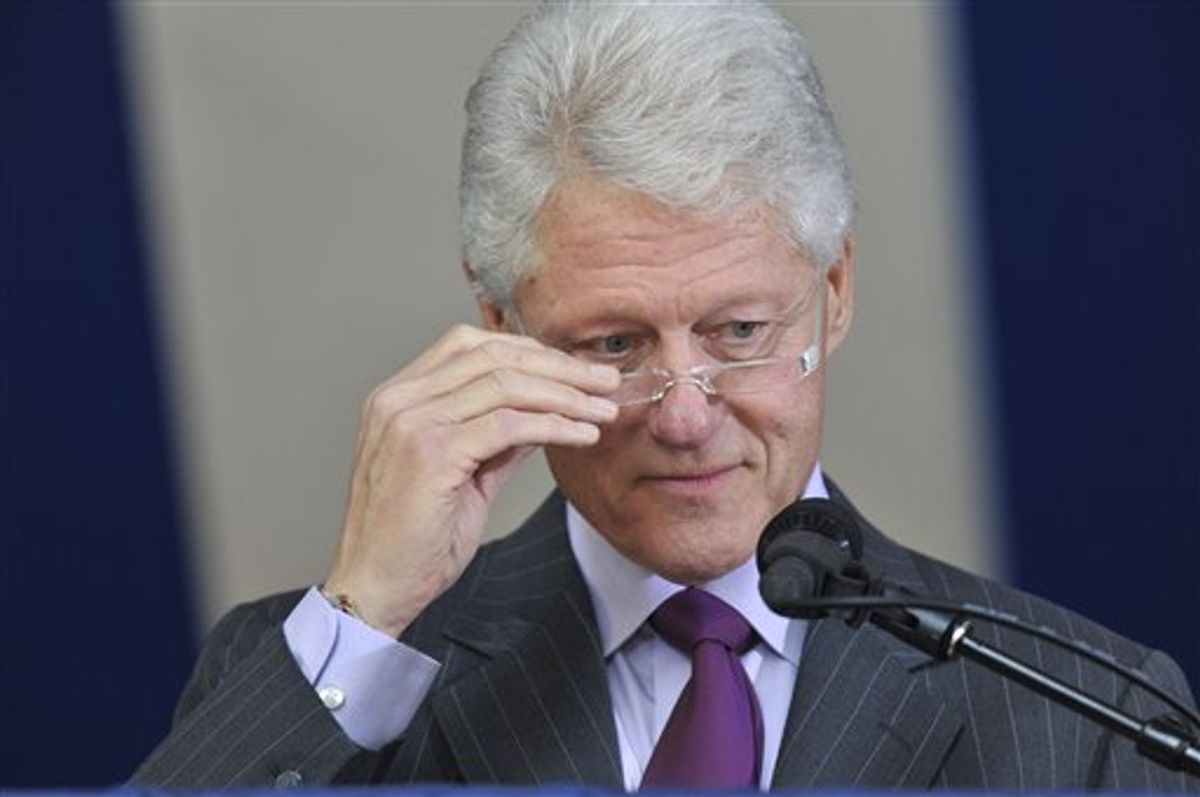 The same day Politico ran a story about former President Bill Clinton admonishing Democrats to "listen to the Tea Party," I was lucky enough to catch up with Clinton at his annual Global Initiative in Manhattan, to hear his thoughts on the right-wing anti-Obama movement directly.

Yes, Clinton believes that some Tea Party supporters are "people who feel the middle class has been hosed…by big business and government," and he expressed "sympathy" for that sentiment, but he was quick to add that the movement is led by "people backing ultra right-wing corporate interests" who've been pushing the same policies "for the last 30 years." (I'd say the last 80 years, but who's counting?) He urged Democratic candidates and their surrogates to "legitimize voter anger" that might lead some to give the tea party a hearing – "but don't let it cloud their judgment." And he warned that Democrats who stay home in November because they're angry with the president or Congress will find their decision turns out "like everything else you do while mad, a terrible mistake – you'll get the opposite of what you want."

Clinton sat down with a roundtable of bloggers for a 90-minute wonkfest Monday night, passionately defending President Obama and the Democratic congressional majority's efforts on jobs and the economy, laying out the reasons he's optimistic about Middle East peace, and promising a return to partisan witch hunts if the GOP takes back Congress.

Comparing 2010 to the devastating (for Democrats) 1994 midterms, Clinton seemed cautiously optimistic. "The [economic] conditions are far worse, but our crowd is smarter," he said. The former president relished mocking former adversaries like Newt Gingrich and former house budget committee chair John Kasich, referring casually and repeatedly to their "Contract on America" (technically, it was the Contract with America) and joking about recent Republican promises to shut down the government again, as they did in 1995: "I'm Br'er Rabbit, don't throw me in that briar patch again." While Kasich tells crowds, as he campaigns against Ohio Gov. Ted Strickland, that he "forced" Clinton to balance the budget, Clinton noted that Strickland actually did the heavy lifting by voting for the 1993 tax hike (and he paid for it with his House seat the next year). "It was easy to balance the budget, because the work had already been done," Clinton argued, and he suggested the Ohio race and others will get closer or turn around (Kasich currently leads Strickland) as Democrats hammer home that history.

On another partisan sore point, Clinton promised "two years of unrelenting investigations into the White House, staff and cabinet" if the GOP takes back Congress, noting sarcastically that's how Obama will be "rewarded" by Republicans for not investigating alleged Bush administration wrongdoing.

Election 2010 aside, Clinton argued passionately for greater public and private investment in green jobs and technology. At a time when chances seem dim for any kind of ambitious climate change legislation, he was vigorously pitching energy retrofitting and "whitewashing" – painting the black tar roofs of old city buildings white, to keep them cooler in the summer, which he said could also provide employment for urban youth. A billion dollar federal loan-guarantee program (in which government insures private lenders) for retrofitting, Clinton said, could create as many as a million jobs. "We've got to prove that this is good economics, and that it works for poor people," he argued.

Clinton described himself as "basically hopeful" about the renewed Middle East peace process. First he ticked off a few reasons to be more pessimistic than when he was president, most notably the Palestinian split between Hamas and Fatah, and "a different Israel," especially the new dominance of Russian immigrants (he went into a fascinating digression about the peace-friendliness of various Israeli subgroups, arguing that support for a deal generally increases the more time Israelis have lived there). But he also observed that the comparative stability of Gaza compared to the West Bank, the determination of Fatah to make a deal, and the greater engagement of Muslim countries in the process all worked to make progress somewhat more likely. He was slightly less forthcoming on that topic than others, noting that "I wouldn't say much if Hillary wasn't Secretary of State." (His wife, Secretary of State Hillary Clinton, is expected to attend a session here Tuesday afternoon.)

I've been on vacation over the last week, and there's a lot to catch up on. I'll have more from the Clinton Global Initiative -- and other topics -- in the next few days.