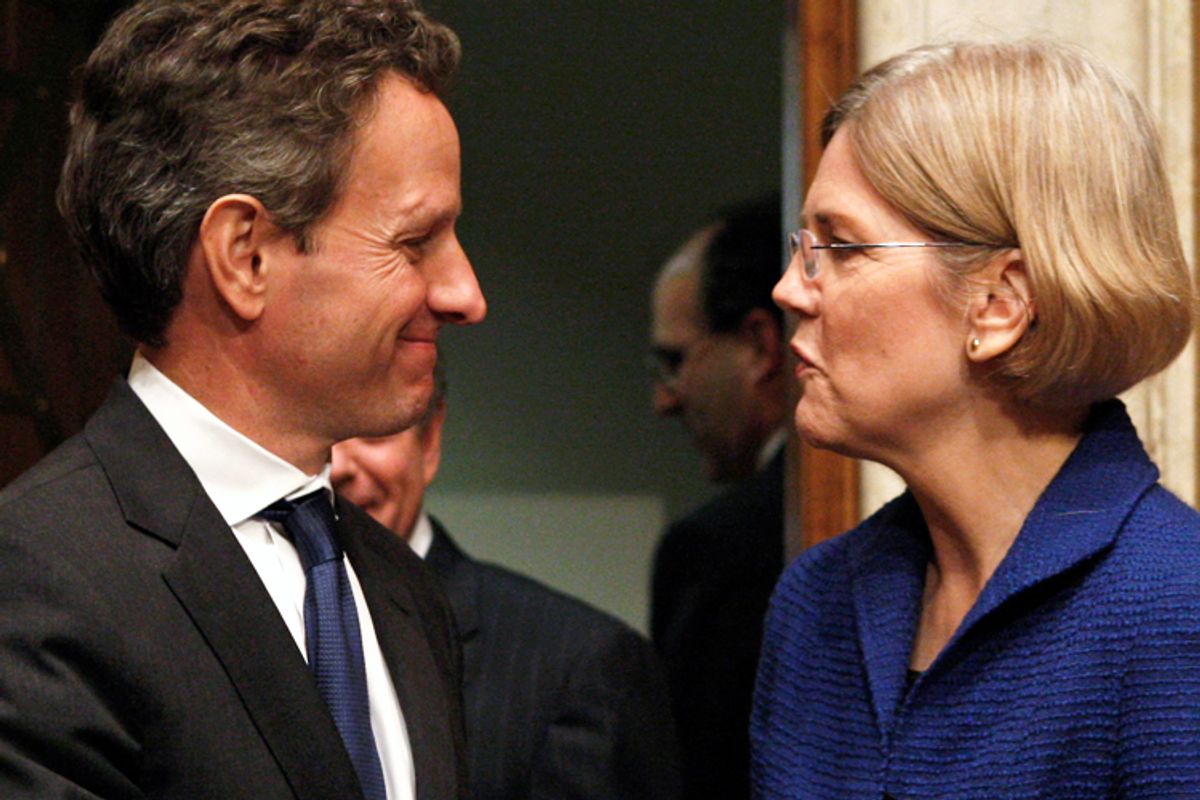 After all the drama associated with Elizabeth Warren last week, her first press release after being appointed Assistant to the President and Special Advisor to the Treasury Secretary, in charge of setting up the Consumer Financial Protection Bureau, is not the stuff to get progressive pulses racing. On Tuesday, Warren and Geithner hosted a forum "to seek input on the simplification of mortgage disclosure forms so that consumers have the clear and easy-to-understand information they need to make the financial choices that are best for themselves and their families."

"Fine print obscures the cost of credit and makes it impossible for families to compare products. Too often, families come to understand the legalese only when they get bitten by it," said Professor Warren. "Streamlined disclosure can level the playing field and give families better tools to make better choices. This is particularly true in the mortgage market, where borrowers receive stacks of incomprehensible paperwork when they're looking for a loan."

I am all for reducing incomprehensible paperwork and there is certainly nothing here that is inconsistent with Warren's previous statements or the mandate for the CFPB. If mortgage disclosure forms had been written in clear language prior to the last decades, who knows how many would-be borrowers would have steered clear of some of the more obviously ridiculous mortgage "products" offered by lenders?

But there's more than a little bit of a closing-the-barn-door-after-the-farm-has-been-foreclosed-upon feel to mortgage disclosure conerns. If one of the reasons we are supposed to be pleased about Warren's new access to the White House is her ability to influence economic policy making, the focus on paperwork, at this juncture, feels a little mundane.

But it's early yet. On the flip side, I can't stop rolling my eyes at the Washington Post's decision to harrumph pompously about the Warren appointment in an editorial published on Sunday, "President Obama picks Elizabeth Warren ... and thumbs his nose at the Senate."

The Post has "qualms." Not just because, as an activist, Warren "can be simplistic and hyperbolic," but also because Obama's "end run of the Senate confirmation process... might have been in keeping with the letter of the laws, but not with their spirit."

Echoes of UC Berkeley economist and blogger extraordinaire Brad DeLong's oft-spoken lament "Why oh why can't we have better press corps?" nearly knocked me off my chair while I pondered the Post's sober misgivings. Yes, it is true, Obama's innovative approach to getting Warren to work is not strictly according to the "spirit" of how our government is supposed to function. But it is a clear dereliction of the Washington Post's duty to fail to put Obama's actions into the proper context: Which is that of an essentially broken Senate, in which the Republican minority has abused procedural rules -- rules that are not in the Constitution, by the way -- to cripple the duly elected administration's ability to govern.

The Post brushes at this by lamenting "the polarized Washington in which we actually live." And sure, both Democrats and Republicans have played similar games in the past. But we have never seen a session of Congress in which the minority party has more relentlessly abused the filibuster and other Senate conventions to prevent appointments from being made, votes held, and the ordinary business of government accomplished. To run an editorial accusing Obama of "thumbing his nose" at the Senate without properly identifying Senate Republicans as having, from day one, pissed all over the White House, is shameful and willfully ignorant.