Bloomberg reports that the nemesis of the left is set to leave his post. Which means: Geithner reigns supreme 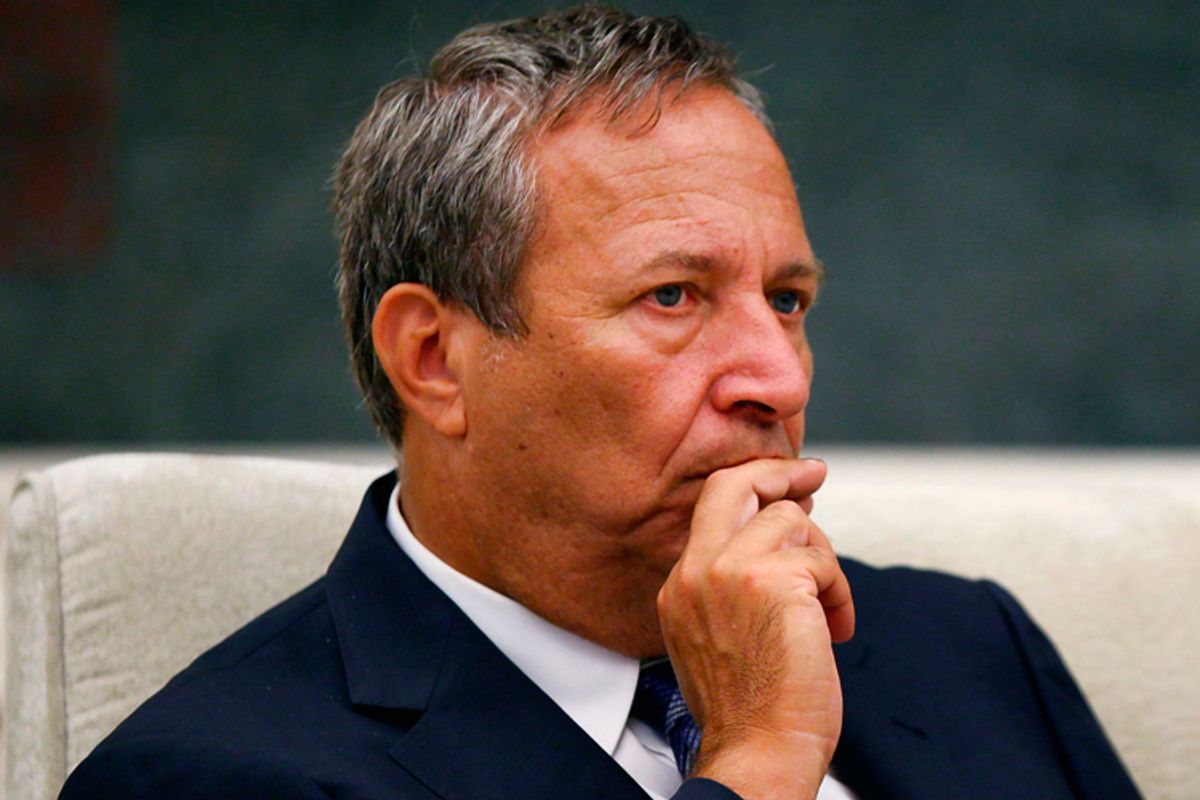 Progressives distraught at the news that Senate Republicans squashed a repeal of "don't ask, don't tell" on Tuesday may have at least one reason for cheer today. Bloomberg News is reporting that their longtime nemesis, Larry Summers, plans to leave his post as director of the National Economic Council shortly after the midterm elections in November.

Ah, but some pessimists might say, the damage has already been done! Summers protected Wall Street banks from nationalization, held down the size of the stimulus, neutered bank reform and underestimated just how badly the recession would smack the labor market. Now he's leaving just at the exact point when the White House's ability to actually push through an aggressive economic agenda will be severely constrained by likely legislative losses in November. And he won't depart until after the election, which means Obama won't have a chance to appoint a replacement who might get progressive juices flowing in time to make a difference at the ballot box.

Maybe all that's true, although I suspect that when a definitive history of the Obama administration is written we will learn that the most important person determining the shape of Obama's economic policies was likely Obama himself. But I also can't help recalling reading just last week that Christina Romer, the chairwoman of Obama's Council of Economic Advisers, had been "widely believed to have left her post ... because Larry Summers had successfully walled her off from Obama." Too bad she didn't hang on! Or maybe, just maybe, the Kremlinological implications of each change in Obama's economic team are overrated.

There just might not be any real tea leaves to read here. The departures of Peter Orszag, Obama's budget director, Summers and Romer, taken together, diminish the impact of any single exit considered separately. We know that Orszag was very concerned with the deficit, while Romer wanted stronger stimulative measures and Summers was supposed to be the advocate of less heavy-handed regulation. But when all three leave in relatively close proximity to each other, the entire process feels more like a routine changing of the guard than the outcome of any kind of factional struggle.

The real excitement will come in analyzing who gets named to replace Summers. Obama replaced Romer with his longtime advisor, Austan Goolsbee , ensuring near perfect continuity with his original economic team. He replaced Orszag with former Clinton budget director Jacob Lew -- the very antithesis of a shakeup. He has a clear opportunity to signal a real change of direction now, perhaps with the appointment of someone like Jared Bernstein, who hasn't been heard from much since being sidelined as Vice President Biden's economic advisor. Or he could really get people talking by bringing in Paul Volcker.

Or he could completely irritate the Democratic base by plucking a Wall Street executive for the position:

Administration officials are weighing whether to put a prominent corporate executive in the NEC directors job to counter criticism that the administration is anti-business, one person familiar with White House discussions said. White House aides are also eager to name a woman to serve in a high-level position, two people said. They also are concerned finding someone with Summers experience and stature, one person said.

Hmm. Somehow I think that the theory that Obama is "anti-business" really isn't the White House's biggest problem. But if he is determined to go that route -- here's a way to kill three birds with one stone. Appoint former eBay CEO Meg Whitman to the job. In one stroke  Obama would get a corporate executive, a woman, and the undying gratitude of millions of Californians.

How The World Works Larry Summers