The majority leader embarrasses New York's accidental senator -- but who leaked it to the press? 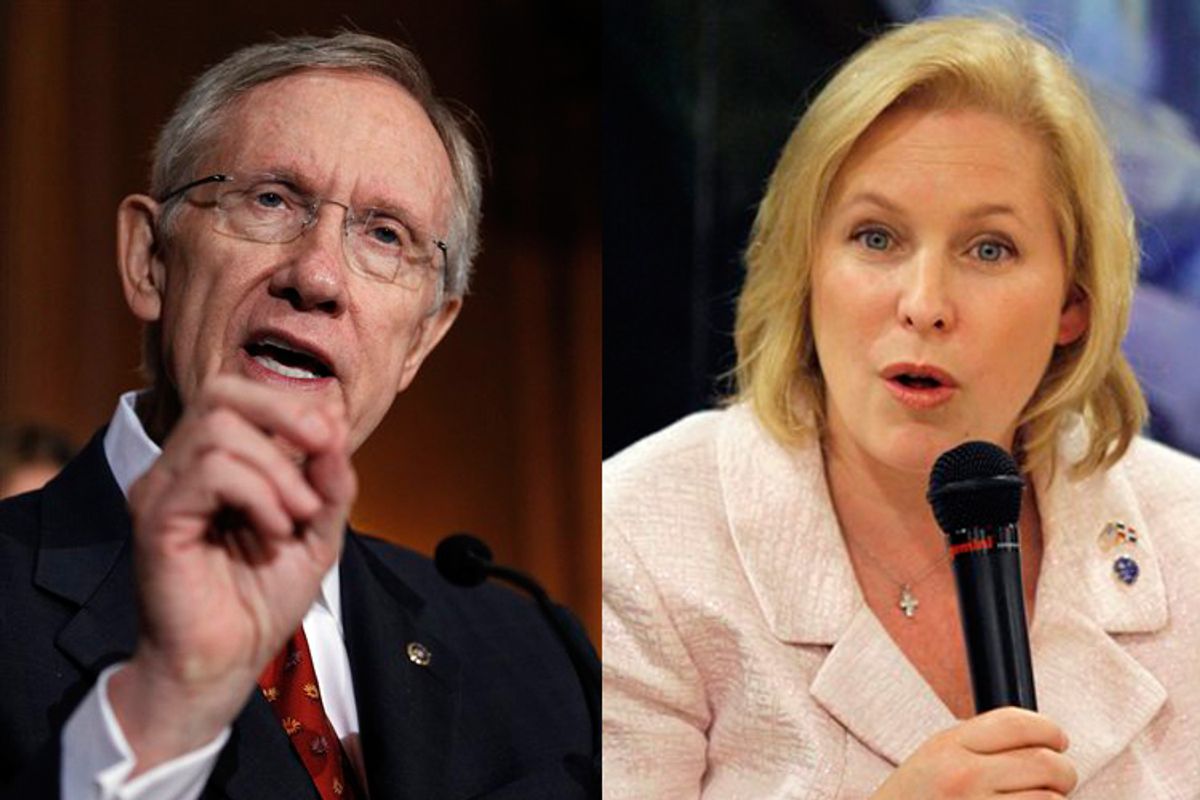 Reid praised Schumer at length, discussing how he could have run for governor - and won - in 2006, but didn't, and instead accepted the Nevada senator's entreaties to run the DSCC.

Then he turned his attention to Gillibrand, saying something about how "many senators are known for many things," according to a source. He added, "We in the Senate refer to Sen. Gillibrand as the hottest member."

He also then discussed her knowledge of securities law as extremely deep, and suggested she was better on certain policy elements than other people, according to the sources.

Oof. Gillibrand apparently "turned red," according to Maggie Haberman. (This is actually less creepy than what he said about Chris Coons, but the implications are worse, because it basically confirms that the Senate is still a gross old boys club.)

Here is what I find interesting, though: This was a fundraiser for Reid at Michael Bloomberg's townhouse. Bloomberg supports Reid, so no surprise there. But Bloomberg decidedly does not support Gillibrand, who is about to win her first statewide election after being appointed to her seat by accidental Governor David Paterson. Bloomberg quietly supported Harold Ford's aborted campaign for the seat, and then pushed his friend Mort Zuckerman to enter the race.

So who do you think leaked this to Politico's Maggie Haberman (one of New York's best political reporters, with sources everywhere)? Bloomberg presumably doesn't want to embarrass Reid, but would have no compunctions about embarrassing Gillibrand. I doubt the mayor himself is responsible, but someone close to him probably is.

This won't really hurt Reid's campaign, at all, because -- like his "Negro dialect" comments -- it is basically another example of Harry Reid sounding like someone's grandpa. Sometimes grandpa says awkward things!

And his staff does not seem particularly worried:

Reid spokesman Jim Manley, reached by POLITICO, said, "What can I say, she made The Hilll's 'Most Beautiful list. Of course he also went on to praise her skill and tenacity and described her as an effective member of the New York delegation as well."

And, honestly, getting embarrassed by a gross old man doesn't really hurt Gillibrand's campaign, either. So everyone wins, except for women who want to be taken seriously as public servants.