Christine O'Donnell on Hannity: Who doesn't regret the '80s? 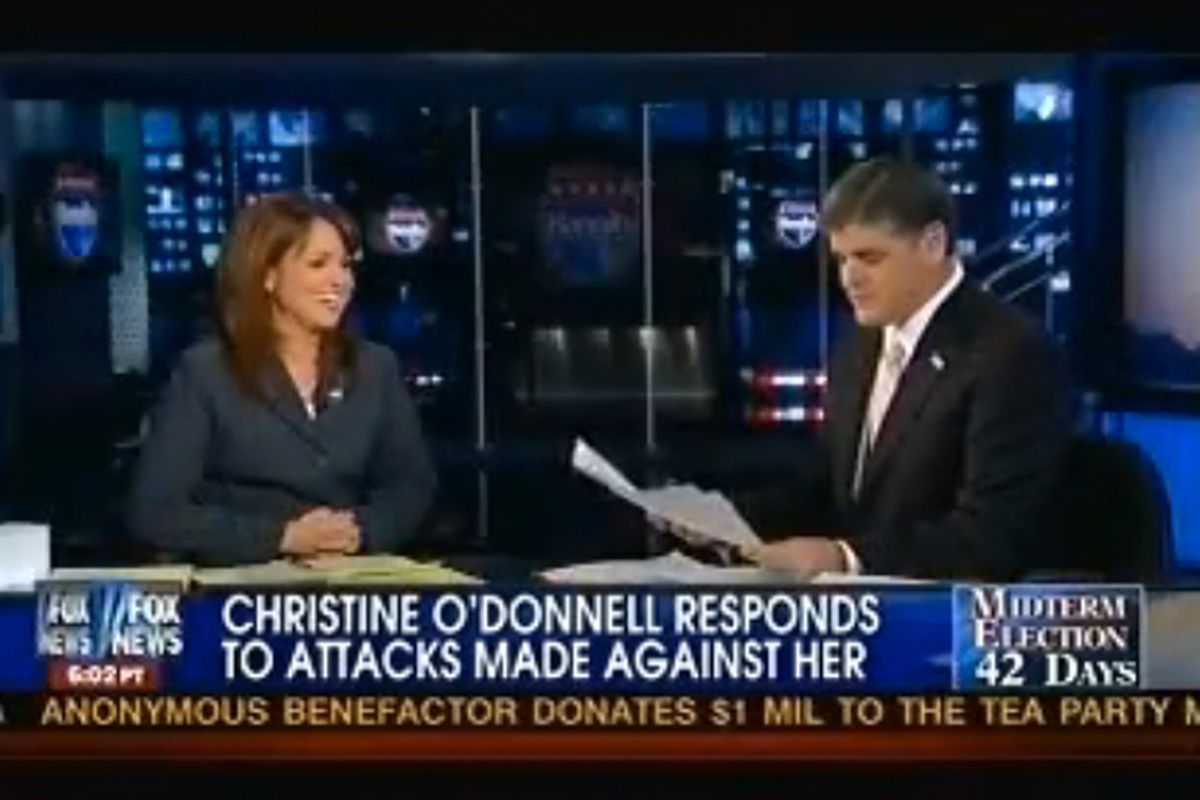 Christine O'Donnell sat down with Fox's Sean Hannity last night to explain why she's done doing national TV, except for this Sean Hannity appearance. Hannity peppered her with tough questions, while leading her comfortably to prepared responses drafted by her new media team.

Like, after outlining her history of being generally fanatical about "moral" issues, Hannity asked her to blame her own positions on Democratic attacks: "Do you think this is an attack on religion? On your religious beliefs?"

"They're trying to paint me as an extremist," O'Donnell answered, "so that people won't pay attention to my message." Her real message is about the Constitution.

And why did she say all those nutty things, on TV? She was young!

"In my 20s I had a newfound faith and, going on these shows, I looked at it as a ministry opportunity -- that was what I did in my 20s. But that was a long time ago. My faith has matured."

"My faith has matured" is probably the right line for someone who previously preached the sort of fundamentalist Catholicism that most American Catholics would probably find a bit extreme (while being unmarried and childless at 40!).

This was the best line of the evening, though, in response to the inevitable softball question about her admission, in 1999, that she "dabbled in witchcraft" as a teenager: "Who didn't do some questionable things in high school, and who doesn't regret the '80s, to some extent? I certainly do." Regretting the '80s is a campaign platform everyone can get behind. Though it does seem a bit disrespectful to President Reagan.

(Hannity also says the "witchcraft date" that teenage O'Donnell went on was with a boy, which O'Donnell never actually explicitly said. Not that I'm saying anything, I'm just saying.)

O'Donnell now promises to disappear from Fox until the election (and she certainly won't agree to appear on any more Sunday shows). "I'm not going to do any more national media because this is my focus: Delaware is my focus, and the local media is my focus." So now we get to see if she actually makes herself available to the local Delaware media. I'd be surprised. Sharron Angle prefers Fox to the Nevada press, and I predict O'Donnell will soon feel the same way.

This one's for Christine, who doesn't recall the '80s all that fondly: