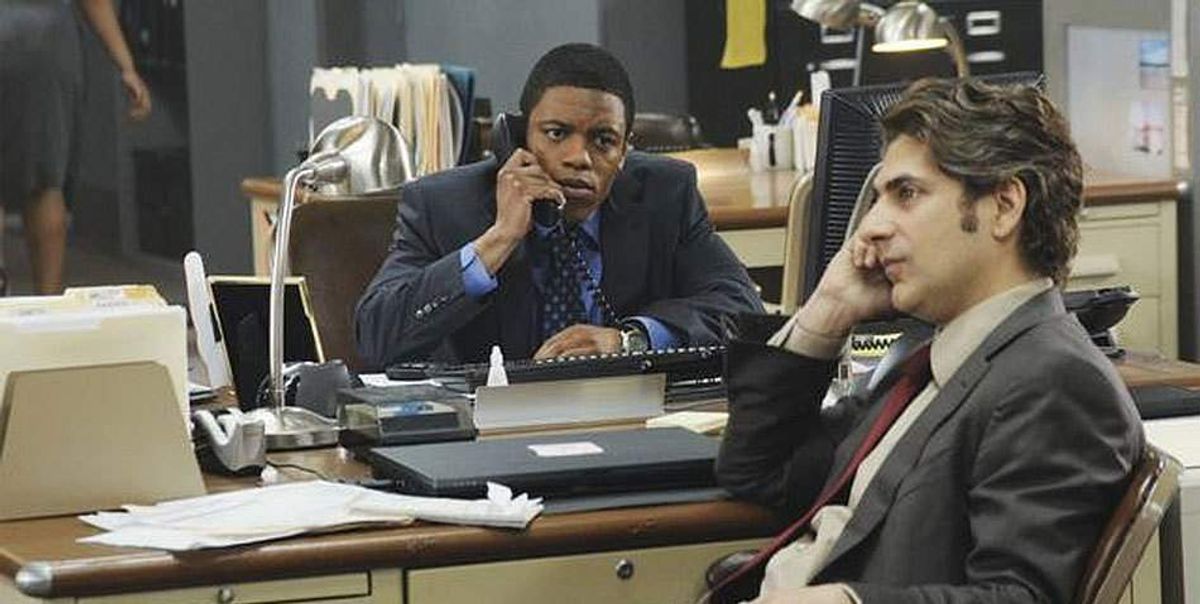 ABC, in their infinite wisdom, realized that there was a dangerous shortage of cop dramas on television. Fearing that viewers might be overwhelmed by the trauma of original programming such as "Pushing Daisies" or other such shows, they quickly commissioned "Detroit 1-8-7" so that Americans could get their weekly recommended dose of hot cop-on-criminal action.

The show opens with our first four stars: Jon Michael Hill (playing Det. Washington), Michael Imperioli (Det. Fitch), and Michael Imperioli's eyebrows (lefty and righty). A helpful graphic tells us the name of each character and how many years they've worked in homicide. Of course, the fact that Washington barfs at the crime scene, answers a personal cell phone call in the middle of a family death notification, and basically wanders around wide-eyed and bushy tailed the whole episode pretty much makes the "Det. Washington, 1 day, homicide" graphic redundant.

Pretty much all the graphics in this show are redundant -- it's like they think the entire audience is composed of morons who have no idea how traditional narrative works. There are only two homicide cases in the episode, each of them worked by the same detectives throughout, and yet they feel compelled to caption not only which case is currently being shown, but also where they are in the investigation process. Yes, show, I know that the "Bullet Train" investigation is in the autopsy phase, because the two detectives from the train murder scene are present and they are in the morgue.

The minute we meet Sgt. Langford (James McDaniels), we know he's too old for this. This realization is confirmed by his grizzled veteran demeanor, the overly helpful graphic that tells us he's been in homicide for 30 years, and the fact that he's introduced by Marvin Gaye on the soundtrack. Because Langford is clearly too old for this and is buying an Italian villa in anticipation of his retirement, it instantly puts him on the top of my death pool, along with the bushy-tailed rookie, because this is a pilot episode and in a cop drama pilot someone on the main cast has to be expendable.

Also in the cast are Tough Lady Boss (played by "Hey It's That Guy" actress Aisha Hinds), Tough Hot Latina Cop (played by Natalie Martinez) and Cocky Stud (played by D. J. Cotrona). Rounding out the cast is Langford's partner Det. Mahajan (Shaun Majumder), who has no clear stereotypical role yet.

My favorite part comes at the beginning of the episode where a random beat cop makes a remark about being glad that the crack heads stay in their crappy neighborhoods to kill each other over drugs versus coming out to the suburbs where he lives. Tough Hot Latina Cop gets up in the guy's grill, all, "I grew up near here! Every time I come to one of these murder scenes I pray it's not someone I know!" It's supposed to be like she put Suburban Cop in his place, but he kind of has this look on his face like, "Uh, this is sort of my point, lady."

Two rather dull homicide investigations end up converging into one case. Long story short, a guy gets paroled and decides that murder/suicide is the best way to reunite with his wife and kids. He gets the wife, his parole officer and some other random guy, but gets talked down off the proverbial ledge before he can kill his kids and himself at the end.

The show hits pretty much all the expected dramatic points: the interrogation scene where Fitch applies an unconventional approach to break the suspect, the dramatic car chase (complete with flaming car of peril!), and a hostage standoff (again, helpfully captioned "Hostage Standoff" for the viewers) in which Fitch single handedly disarms the situation by empathizing with the suspect and walking slowly at him with his hands up, until the suspect turns his weapon over. This is of course total fantasy, because who wouldn't look at Michael Imperioli's smug face and NOT instantly shoot him?

Detroit apparently has the worst procedures ever when it comes to handling known violent offenders, because the suspect breaks free at the precinct at the end of the episode and grabs a gun from a passing cop (don't they have holster straps and safeties?). In the confusion, Rookie McBarf gets his fool self shot, just as he receives a call from his wife telling him their first child is probably born. It's not clear if he's dead or not at the end of the episode, and really, it doesn't matter. The episode doesn't really focus on one character, so losing a cast member doesn't care much impact for the viewer. If anything, it's just one more emotional trauma for Det. Fitch to drag around, because Fitch is the designated character who "doesn't play by the rules" and who has a mysterious and tragedy filled past that informs who he is.

Look, I know it's a pilot episode, and usually those are concerned more with getting all the relevant characters on the board and properly introduced to the audience so we know who they expect us to spend 22 weeks with than with telling a great story. It's possible that the show will get much better next week. However, I didn't see much in this episode that makes me want to tune in again.

Summary: I still can't believe they canceled "The Unusuals." They HAD a great cop drama already, and it was way better than "Detroit 1-8-7."