A survival guide to my husband's abandonment

I thought I'd be lost after he left me with our kids, but I found unlikely inspiration: A wilderness reality show 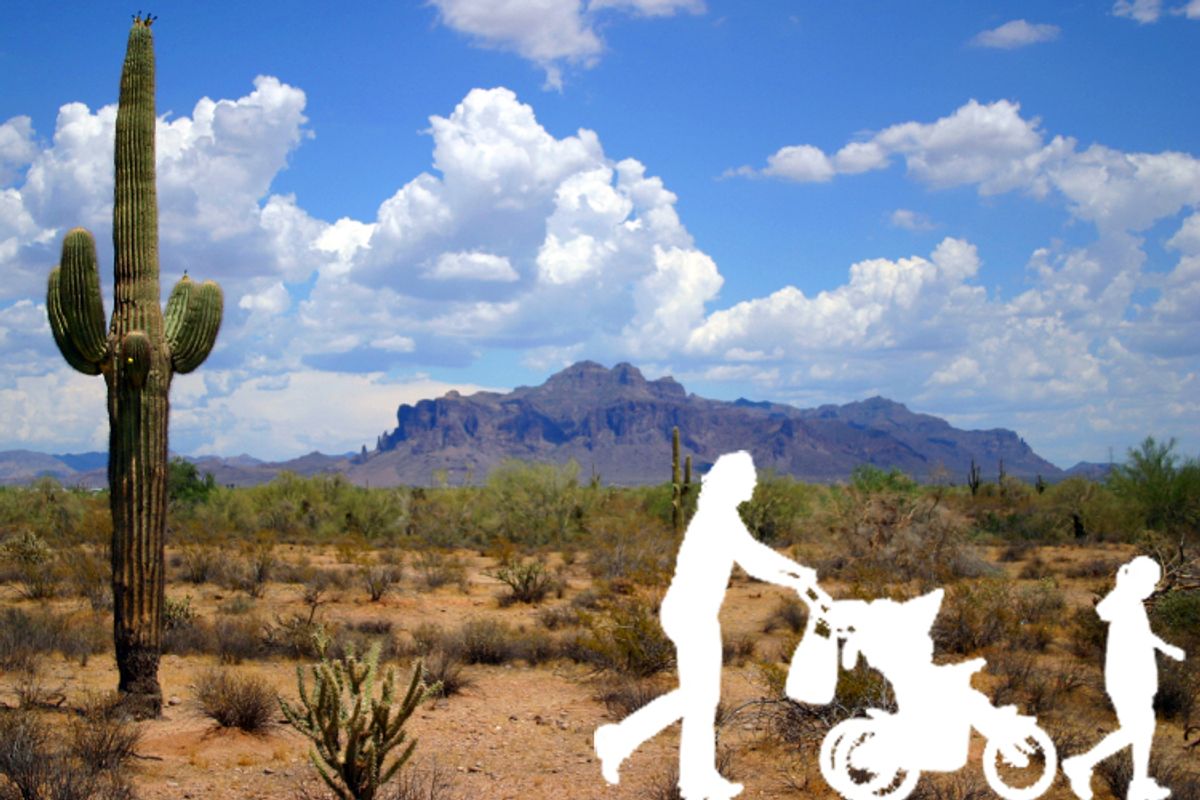 It was late on a Friday evening in the middle of a hot summer that my husband left us for good. I struggled into the kitchen with a bag of groceries, a baby on my hip and a 5-year-old in tow. On the counter was a goodbye note.

I noted with detached gratitude that my older child was not yet reading fluently as I stood by the kitchen table that night, looking down at my husband's familiar handwriting. The message was scrawled with a black sharpie pen he didn't bother to recap on a manila folder from our home office file drawer. "I no longer desire a family. Do not try to call me." He always had such beautiful penmanship, much better than mine.

In the first few months of learning to be a single parent, evenings were excruciating. Once the long slog toward bedtime was over and my two children scrubbed clean and in bed, I would sit on the couch and ache for grown-up company. The house was quiet and seemed hostile as I plowed through the physical and emotional effects of shock. I kept imagining my husband walking through the door with mints in his pockets, tired from construction work.

Normally, I do not watch much television. If I indulge in an occasional hour or two, I watch food shows, anything involving a new pie or cake-baking technique. I was never a fan of reality television, but one night, I became weirdly giddy to realize I could watch whatever I pleased on television without negotiation. What I watched was "Man vs. Wild."

In my first year alone, I became obsessed with that show. I set my TiVo to record all occasions on any channel, day and night, and I rationed them to myself, like treats. I loved how the ridiculously charismatic and handsome host, Bear Grylls, would drop from the sky into a rugged wilderness and find his way out with only one or two tools: a spoon and a cup or pocket knife and matches. It occurred to me I should actually take notes while watching. Anything can happen.

The biggest killers in the desert are heatstroke and dehydration, which come on very quickly. The most important part of the body to keep cool is the head. Fashioning a headdress with a light colored material will keep the sun off the skin.

I began to look forward to evenings alone and my quiet house. I was cleared of worry and grief as soon as I heard the intro music begin. I was riveted as Bear parachuted into a rain forest with only a knife and canteen. He was always careful, but sometimes the water made him violently ill anyway.

Meanwhile, I put together a résumé for the first time in five years. Years earlier I had walked away from a career that I loved to be able to stay home with my children. Setting aside my urge to be humble, I marketed myself and e-mailed my résumé to 50 jobs on Craigslist. I proclaimed my strong interest in each company and explained why I was obviously an excellent fit.

Early the next week, after leaving my children with a kind neighbor, I embarked on a full day of job interviews. I soon received a job offer.

If you can't swim well but you need to cross a large body of water, you can use your pants as a flotation device. Remove your pants, fill them with air, then tie off the legs. Raise the pants over your head in the water and it will act like a life jacket.

I had one week in which to solve the problem of how to be a single mom and a full-time star employee, deserving of quick promotion and salary increase. I spent those days in a dark fog looking at day cares with my children sleeping in the back of the Jeep I'd owned since college.

The childcare facilities with immediate availability were gloomy and depressing. I visited one that was staffed by teen attendants. One teenager was still tipsy from the previous evening as she monitored several crawling infants in a converted garage space. One looked warm and inviting from the outside, but inside reeked of urine and Pine-Sol.

Temperatures in Alaska can reach as low as minus 60 degrees F, putting you at risk for frostbite. Keep your extremities as warm as possible. You are getting frostbite if your skin goes a waxy, red color, then black.

I crafted an ad for a nanny share, posted it on Craigslist, and began interviewing people. I explained to each candidate that I was just entering the workforce again. My husband left us abruptly, I would say with fake pluckiness. But I have a job now! And I am looking for someone to take a leap of faith because ... did I mention? There really isn't a nanny "share" right now. There is just me, but if you start now, I'll promise to look diligently for another family to share the other 50 percent of your wages. Can you start tomorrow?

On my third nanny interview I encountered a reserved, self-possessed mother of a baby girl the same age as my son. She was looking for a nanny position closer to her home and was willing to start almost immediately at half pay, while I found a second family. Our life was in upheaval and transition and she exuded steadfastness, hard work and quiet.

The following week I ran to catch the bus to work for the first time in many years, wearing the best wardrobe $35 at Goodwill could buy.

If you need to find your bearings on a sunny day, you can find north, east, south and west by using the shadow and stick method. Find a stick, insert it into the ground and you'll see that it casts a nice shadow. Mark where the end of the shadow is and leave the stick for 15 minutes. Mark the next point and that will create an east-west line.

I zipped my professional self uncomfortably back on like a tight minidress, out of date and ill-fitted. I employed the "act as if" method. Sure, I can handle that! And then I went back to my desk to sort out how much things had changed in the working world in the five years I spent at play group and the co-op. I did not mention my children. I did not mention my grief. I did not mention "Man vs. Wild" or survival gear.

I surreptitiously Googled Bear Grylls' name at work. I found that he had a beautiful, devoted wife and a small child. I was terribly relieved to find out he was filming the next season. That night, I watched him rappel into the area near a molten volcano on the island of Hawaii. He kept out deadly fumes wearing his own gas mask and sucked water from a lava tube.

One of the worst aspects of a jungle wilderness is the density of the vegetation, making it difficult to get your bearings. Climb a tree as high as you can; you get a better viewpoint by going above the canopy.

My body, angry about the separation, hurt while away from the baby. I packed extra undershirts and sneaked into the bathroom with a breast pump when I could. I hoped I didn't stink like sour milk as I sat in the executive meetings. The snug professional blouses that fit my bust in the morning did not fit by noon.

I set it all aside so I could work hard and earn that paycheck we needed to survive. The job was a good fit and I began to make progress at work. Perhaps we would make it through this.

The Moab contains two major rivers: the Colorado and the Green. Finding one of them will be the key to getting out. They will provide water for drinking, and following the river will eventually bring you to civilization.

Standing on a bustling Seattle sidewalk during my lunch hour, I sorted through ridiculous, painful legal entanglements hissing into my cellphone. At first I was in deep denial -- certainly he was going to return happy and healthy like our early years together, and "that crazy-ass summer we separated" would be something we talked about in our old age, holding wrinkled hands across the dinner table. Remember how you came back and we worked it out?

The divorce I had dreaded ultimately proved to be simple. It was perversely quick, because the only thing he wanted was to walk away with nothing. All that we owned and built and grew together, including our children, was signed over to me in full with no strings attached.

My daughter started kindergarten that year. I walked her through the enormous front door of the public school alone. With her too-big backpack and her hair neatly combed, she looked very grown up. I knelt down and kissed her sweet, warm face.

The "Man vs. Wild" season came to an end and I missed it terribly. Evenings were still occasionally difficult but they were also manageable. I made sure to keep the show on my "record" list.

My daughter turned 6, and I baked her a Jolly Roger birthday cake. After the screaming 6-year-old guests left, my new nanny stayed after to help me clean up the mess.

When Season 2 of "Man vs. Wild" premiered the next year the episodes began stacking up, unwatched. I simply found it difficult to set aside enough time to watch them.

What I do know is this: If I ever end up near a manzanita bush, which is indigenous to the Sierra Nevada, it is a great source of food. The fruit is high in vitamin C and the leaves can double as a toothbrush. If you happen upon a manzanita bush, chew the outer part of the fruit and spit out the hard seeds.

"Ultimately your survival depends on this," Bear Grylls has written. "How much do you want it? How deep is your well of determination?"

Kelli Kirk is a writer, baker, mom and human resources manager. She recently remarried and moved with her new husband and family into a big, old, crooked house in Seattle.