The fierce fight over the present tense 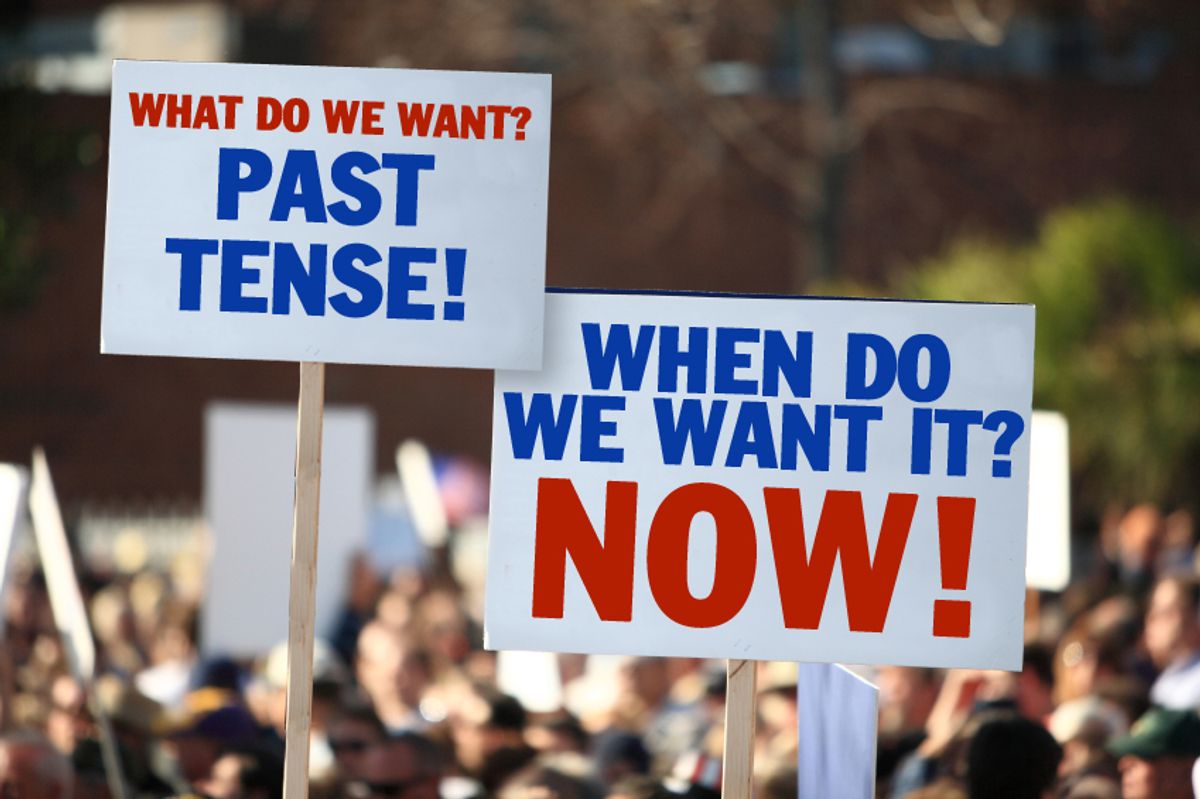 It wouldn't be a Man Booker Prize shortlist without a controversy in the British press, but this year's furor -- launched by one-time Booker judge Philip Hensher -- may strike some readers as a bit wonkish. Hensher (author of the splendid novel, "The Northern Clemency") complained in the Telegraph newspaper that three of the six nominees for Britain's most celebrated literary prize are written in the present tense, a choice he regards as merely, and annoyingly, "fashionable."

Without a doubt, deciding which tense to use in writing one's novel is an important decision for any author. Readers, however, often don't especially notice it. Last year's very popular Booker winner, "Wolf Hall" by Hilary Mantel, for example, is written in the present tense, but if Hensher hadn't mentioned this in his piece (as a "nervy and energetic" exception), I wouldn't have remembered it. Ask the average, literate person to name a novel written in the present tense and chances are they'll come up with "Bright Lights, Big City" by Jay McInerney, published all the way back in 1984. (This instance seems to stick in readers' minds because McInerney called particular attention to the narration by writing it in the second person.) Believe me, you've read lots of present-tense fiction since then.

What reasons do writers give for opting for the present tense? According to Hensher, they've been assured by "creative writing tutors" that it will make their writing "more vivid" and immediate. Philip Pullman -- author of the bestselling series of young-adult novels "His Dark Materials" -- also jumped into the fray in the pages of the Guardian, blaming an aversion to the past tense on the "timorous uncertainty" of "sensitive and artistic storytellers" afraid of the "politically dodgy" implications of seeming to know too much about their own story: "Who are we to say this happened and then that happened? Maybe it didn't, perhaps we're wrong, there are other points of view, truth is always provisional, knowledge is always partial, the narrator is always unreliable, and so on."

The idea that young writers are defaulting to present-tense narration out of a failure of nerve is not new. William Gass lamented this as a trend in the New York Times Book Review in 1987. He associated the device with McInerney, too, but also with women and the first person, invoking the old saw about female writers being less forceful and sure of themselves. Like Pullman, he saw the present tense as wishy-washy and qualified, a refusal to conclusively state what happened.

There's overstatement in all of these protests. No one could accuse "Wolf Hall" of lacking authority, and one of the books on this year's short list, Emma Donoghue's "Room," is narrated by a 5-year-old -- practically the definition of a present-tense mentality; it's an artistically justifiable and successful choice. Furthermore, it's unlikely, for example, that Suzanne Collins wrote her "Hunger Games" trilogy in the present tense in a bid to jump on some artsy, MFA-program bandwagon. The breathless, life-or-death action in her young-adult novels would lose much of its suspense if the first-person narrator, Katniss, was apparently relating the events at a later date.

So is this much ado about nothing? Not if you teach creative writing or judge literary contests. Whenever I find myself talking to people who have done either, I ask them if they've noticed any trends in subject matter or form. On three separate occasions recently, this has prompted long, exasperated rants about the present tense. "They can't even say why they're doing it," remarked one writing teacher of his students. "They just see it a lot and start using it because it seems 'literary' to them. It's a mannerism." I judged a literary prize myself last year, and can testify that a preponderance of enervated, present-tense fiction made up the daily portion of entries I slogged through.

I'm not sure I'd blame the present tense for the limpness of these books, however. Yes, young writers are prone to believing that techniques "calling attention to" the unreliability of storytelling itself are far more daring, innovative and interesting than they actually are. But like other carped-about trends (minimalism, incest as a plot point, short stories ending in an "epiphany," etc.), the present tense is only one among any number of crutches clung to by mediocre writers, usually because they've seen other, more talented writers use them to advantage. The problem lies less with the tool than with the workman.

Teachers, prize judges and literary agents see a lot more of this mass of mediocre writing than the average reader; it's their job, after all. They're better positioned to spot every odd fad that sweeps through the rank and file. (One literary agent Hensher spoke to is mulling a moratorium on both fiction in the present tense and novels "about dead twins.") For those of us at liberty to put down a book that strikes us as dull or unoriginal, the present tense isn't really an issue. If we don't like it, we can always stop. Right now.

Philip Pullman expresses his distaste for the present-tense