Rand Paul cozies up to the neocons 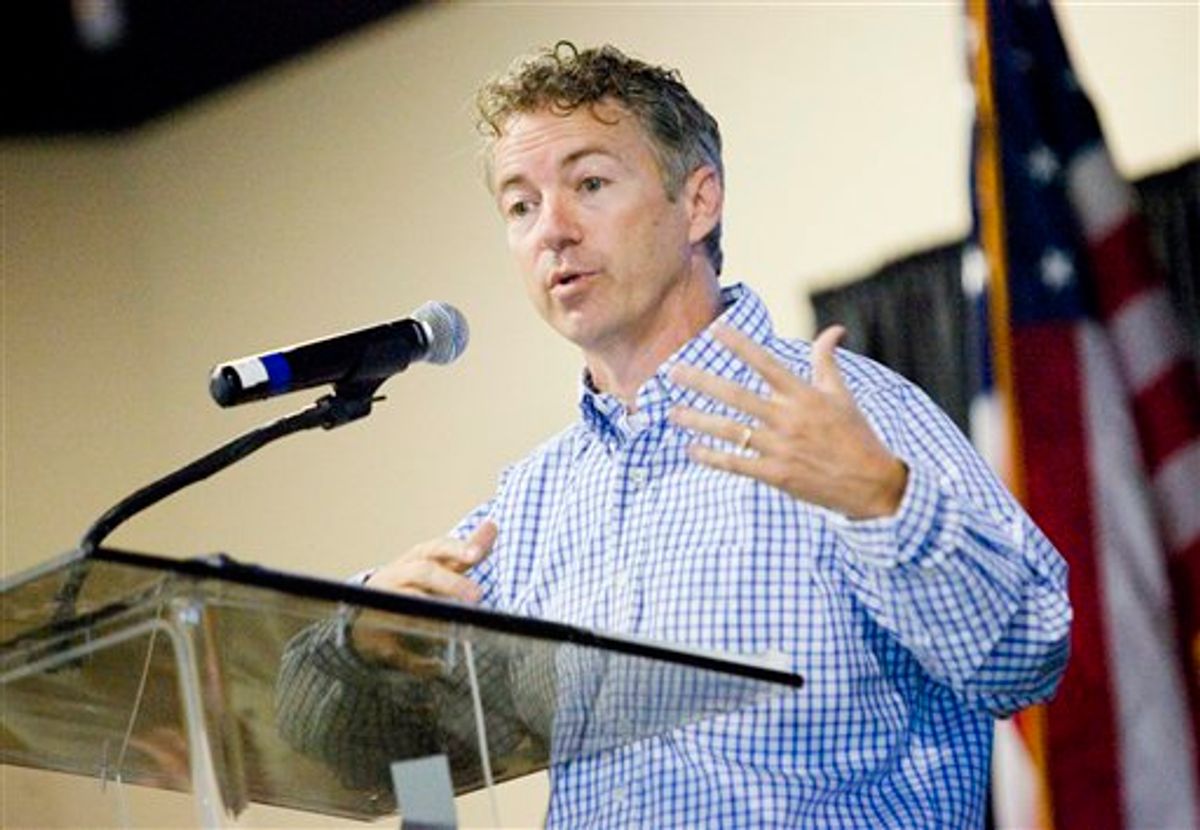 Jason Zengerle's full GQ profile of Rand Paul is out! The exciting part is when Rand Paul proves Godwin's Law also applies to political debates in 2010 by saying that, you know, Obama's not Hitler, but the federal debt will definitely lead to Hitler 2 coming to power at some point, maybe soon.

It's just a dumb analysis born of a facile understanding of history, which is unsurprising because no one will ever convince me that Paul the younger is actually smart, but Paul's defensible misgivings about the future stability of the nation do just sound, to his followers, like "OBAMA = HITLER." I think he understands that, but doesn't really care. (Just like libertarians and "responsible" conservatives of yore usually understood that their intellectual defenses of states' rights just provided respectable cover for racist segregationists.)

Anyway the ol' "Aqua Buddha" pseudo-kidnapping thing is briefly rehashed, but the real meat -- even better than the Hitler stuff -- is the question of whether and how Paul will be co-opted by the establishment. Rand is already happier with the military-industrial state and the drug war than his father is, and it looks like he's willing to cozy up with the GOP foreign policy establishment. Zengerle describes a meeting Paul took with neocons Bill Kristol, Dan Senor, and Tom Donnelly. Senor's takeaway: "He didn't seem cemented in his views. He was really in absorption mode."

Here's the story of how the great libertarian hope comforted AIPAC (emphasis mine):

The following month, he met with officials from the powerful lobbying group AIPAC (the American Israel Public Affairs Committee), which has frequently clashed with Ron Paul over what the group views as his insufficient support of Israel. Paul, according to one person familiar with the AIPAC meeting, "told them what they wanted to hear: 'I'm more reasonable than my father on the things you care about.' He was very solicitous."

All of this has left Republicans in a state of high anxiety about which positions Paul will maintain—and which ones he's willing to bend on—once he enters the Senate. "After the primary, there's been a split and a debate," a Republican strategist involved in efforts to derail Paul this past spring tells me. "Half of us think Paul is far more ambitious than his father—he doesn't just want to prove a point, he wants to be a player—and that his ambition will outweigh his ideology"

Isn't this thrilling news, Rand Paul supporters who bucked the GOP establishment? Rand Paul is "more reasonable" than his father! (Reasonable, apparently, is the opposite of principled. Don't tell these guys.)