The awesome stupidity of replacing Larry Summers with a CEO

If Obama's advisors think the president has an "anti-business" problem, they should be fired 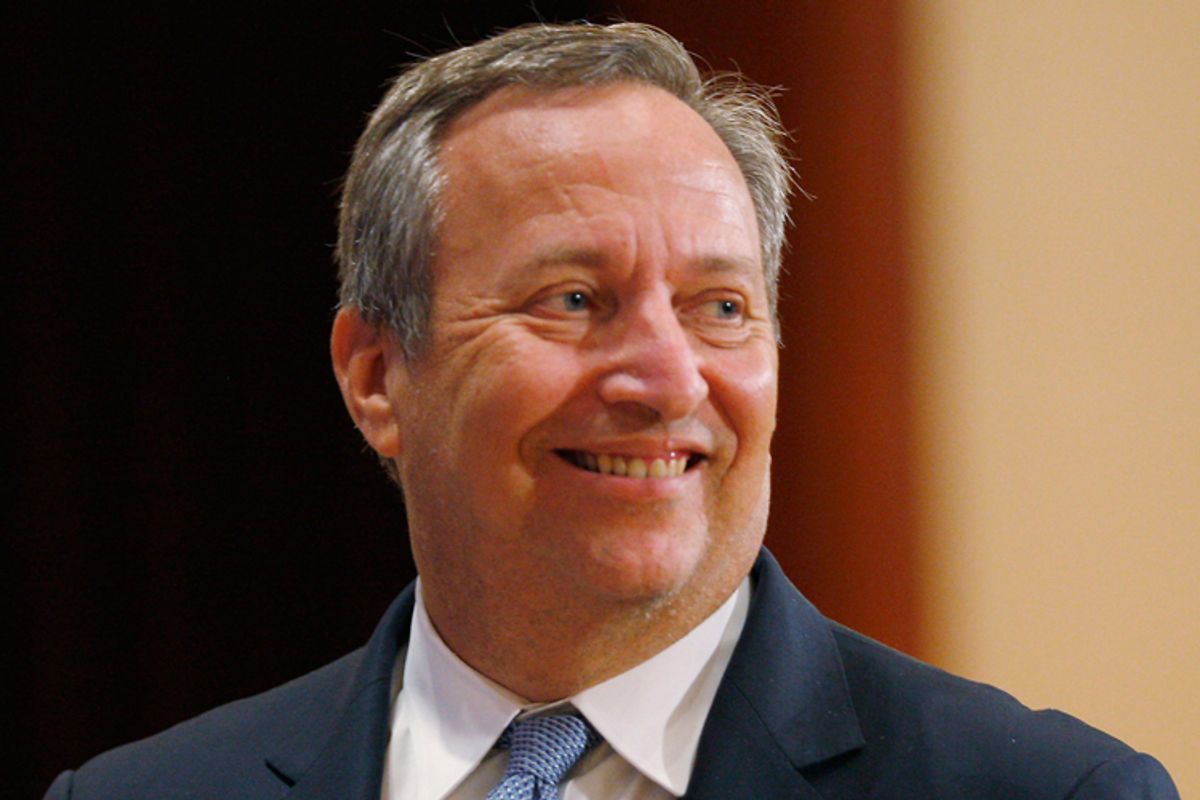 If the Obama administration appoints a corporate executive to replace Larry Summers as National Economic Council director then the White House fully deserves the thumping it will get in November.

The ostensible reason for this colossal misunderstanding of the current political situation, sourced to anonymous adminstration officials, is that the White House wants "to allay the business community's doubts about administration policies."

This is nonsense. The only way for Obama to "allay" the so-called business community's "doubts" would be to join with Republicans in seeking a repeal of bank and healthcare reform, abandon his efforts to raise taxes on the wealthy, and fire Elizabeth Warren. By the definition currently employed on the opinion pages of the Wall Street Journal, anything to the left of Ayn Rand or Jim DeMint is "anti-business." The bleating from Wall Street executives who feel bullied and demonized only proves one thing: Anything less than their total freedom to pursue profit free of all government restraint is utterly unacceptable -- no matter what the consequences for the country at large.

The very notion that Obama is "anti-business" is an absolute charade, cooked up by conservative pundits and fed by financial industry lobbying muscle. It has no connection to on-the-ground reality, and if administration officials think it is one of Obama's problems then they are the worst kind of spineless idiots.

Obama's dilemma is that his middle-of-the-road approach to solving problems has outraged the base of both parties. Hardcore Republicans -- let's say the 47 percent of the country who voted for John McCain -- were always going to view the new president with suspicion. The fact that he managed to get things done -- the stimulus, healthcare, bank reform -- only made him more of a dangerous threat. He's no socialist, but he accomplished a hell of a lot more than either Clinton or Carter in his first two years, and that has got to be a fundamentally destabilizing reality for many conservatives. But appointing former Time-Warner CEO Richard Parsons to Summers' job will not make an iota of difference to that section of the electorate. Meanwhile, the disappointment on the Democratic side is generated largely by Obama's failure to be anti-business enough -- to have stocked his Cabinet with advisors perceived to be aligned with Wall Street, to have rejected breaking up the big banks, et cetera. Again, appointing a CEO will not solve that problem -- it will only exacerbate it.

The truly crazy thing here is that by historical standards Obama is not unpopular. His approval rating, at this juncture in his term, is better than both Ronald Reagan and Bill Clinton enjoyed. The fact that this is true when unemployment is at 9.6 percent, the country is bogged down in Afghanistan, and the prospect for a vibrant economic recovery is still years away is really quite amazing.

Obama needs to reject the idea that Wall Street must be placated any further than it already has been. It's going to be tough enough over the next two years defending the ground that has already been won. He doesn't need to concede any more. What he really needs to do is fire whoever is floating to the press the idea that the administration is concerned about being perceived as "anti-business."