Americans are poor and hungry. Maybe now is not the time to be cutting government funding for food stamps? 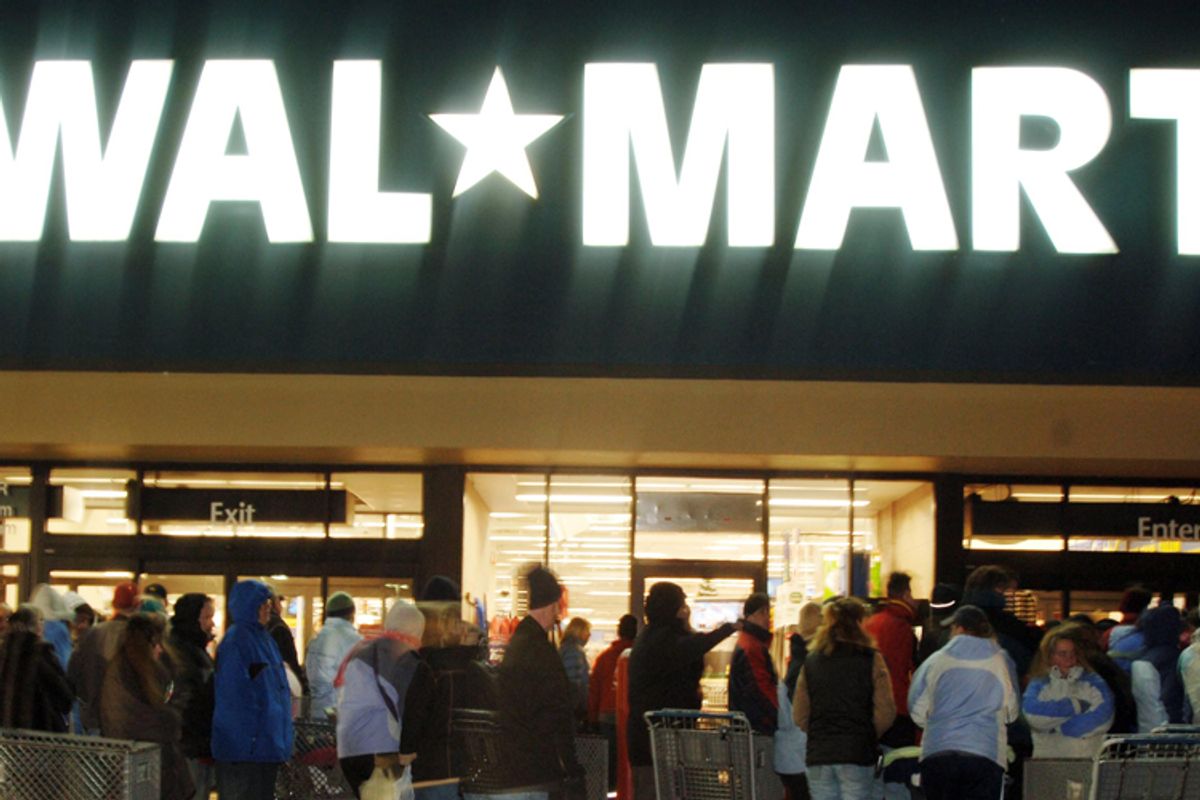 A comment by Bill Simon, CEO of Walmart's U.S. operations, made last week at the Goldman Sachs Retail Conference, is getting tons of play in blogland:

And you need not go further than one of our stores on midnight at the end of the month. And it's real interesting to watch, about 11 p.m., customers start to come in and shop, fill their grocery basket with basic items, baby formula, milk, bread, eggs, and continue to shop and mill about the store until midnight, when ... government electronic benefits cards get activated and then the checkout starts and occurs. And our sales for those first few hours on the first of the month are substantially and significantly higher.

And if you really think about it, the only reason somebody gets out in the middle of the night and buys baby formula is that they need it, and they've been waiting for it. Otherwise, we are open 24 hours -- come at 5 a.m., come at 7 a.m., come at 10 a.m. But if you are there at midnight, you are there for a reason.

This is not the first time Walmart executives have pointed out the midnight electronic food stamp bread line. Last December, Walmart CFO Tom Schoewe was quoted making similar comments in "Midnight in the Food Stamp Economy," a definitive Reuters article on the subject by Nicole Maestri and Lisa Baertlein. Two years ago, Bill Simon's predecessor Eduardo Castro-Wright remarked upon the "disturbing" surge in sales of baby formula visible on the 1st and 15th of every month. Heck, 10 years ago, as Reuters admirably points out, Bone Thugs-N-Harmony released a song detailing the predictable surge in economic activity on the "1st of Tha Month." (However, it should be noted baby formula is not explicitly mentioned as one of the purchases most popular with the target demographic.)

The Census Bureau recently reported that in 2009 43.6 million Americans were living under the poverty line, up from 39.8 million in 2008. The poverty rate is 14.3 percent, the highest since 1994. A record number of Americans -- around 40 million -- are enrolled in the Supplemental Nutrition Assistance Program (SNAP) (formerly referred to as food stamps). So yes, the recession is taking a brutal toll. We knew that already.

But what you might not know is that in August the Senate cut funding for the SNAP program, as part of a deal to ensure that "legislation enacted to save teacher and other public sector jobs and to provide support to the states attempting to shore up Medicaid budgets" was "deficit-neutral."

The funding cuts for SNAP don't kick in until 2014, so we can hope that the economy is strong enough by then to be pulling Americans out of poverty rather than grinding them down into the midnight Walmart baby formula bread line. But just ponder the symbolism of this. Senate Republicans are demanding that tax cuts for the wealthy -- costing around $700 billion over the next 10 years -- be retained, regardless of the impact on government finances. But money directly targeted at saving public sector jobs and paying for Medicaid must be offset by cuts to the welfare net for the poorest Americans. No baby formula for you, ma'am, but we're happy to subsidize your new BMW, mister hedge fund manager.

This is a travesty. When I found myself unexpectedly watching a Bone Thugs-N-Harmony video while researching food stamps this morning, I felt a bit uncomfortable with how the song's message reinforced negative stereotypes of welfare recipients -- as contrasted with the brutal scenario detailed by Walmart executives. But after reviewing the facts, and contemplating the dysfunction of our government, I'm inclined to think that maybe the only sensible response to this mess is a cold 40 and a bag of weed on the "1st of Tha Month."