Fried-cheese epiphany at a street fair

Amid the awful food at the San Gennaro festival, mozzarella sticks that say a lot about American cuisine 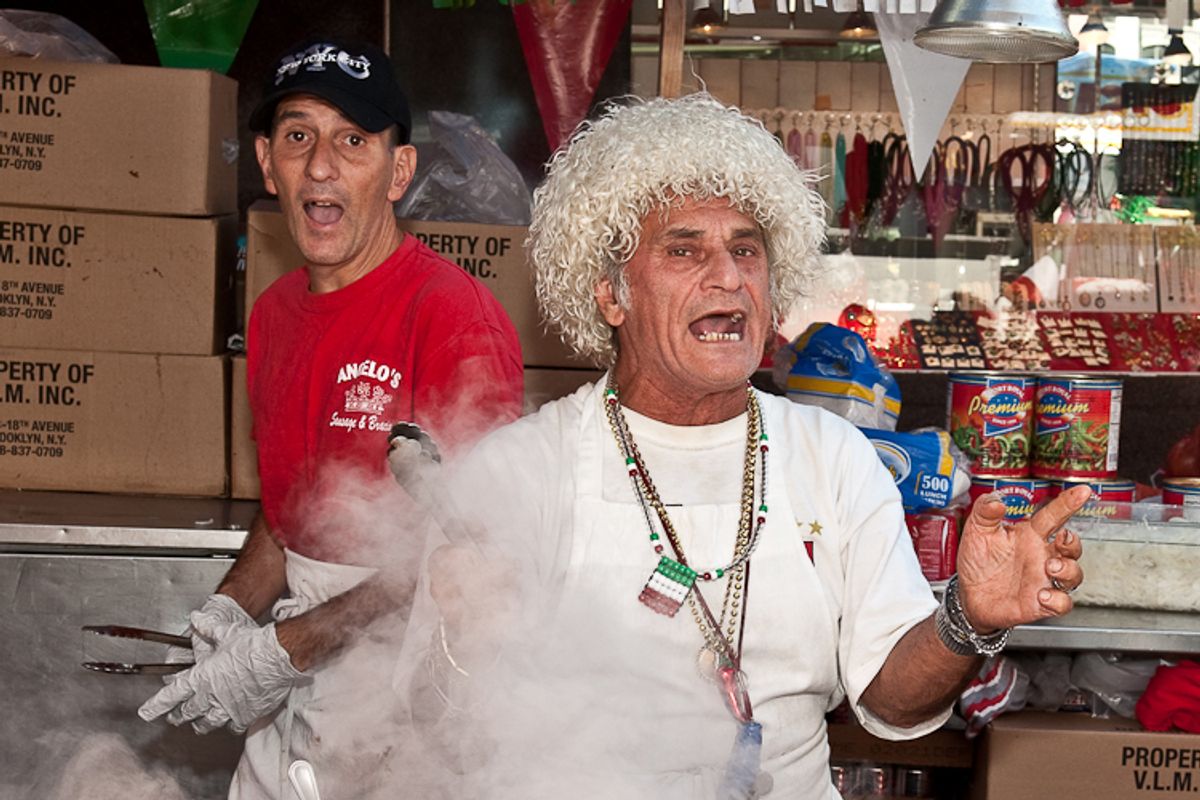 Street food, fast, cheap and out of control, is the current darling of the food lover's world, but the culinary glories of the San Gennaro street fair in New York's Little Italy are faded at best. Deep-fried Oreos offer 10 seconds of pleasure and an evening of regret; once-promising sausages get burned to charcoal before being stuffed into cold rolls with peppers steamed limp. It's not for tasty things that I jostle my way through the perpetually mobbed festival, but to get a taste of a different sort of local flavor, mainly by overhearing things like this: "My pop got into a motorcycle accident and was in the hospital for weeks. My grandpa came over and started cookin' all this Italian food. It was the best thing that ever happened to me!"

But, last weekend, while standing next to the man with the unfortunate father, I came upon three men frying mozzarella sticks in a wok who showed me some of the best qualities of American cuisine.

Standing behind a red banner that reads "Italian food" in Chinese characters, cooks from the very-buzzy restaurant Torrisi Italian Specialties were selling what looked like classic Italian American roast-pork-and-greens sandwiches -- only the pork had the sugary red glaze of Cantonese barbecue and the buns the sweetish, smushy chew of bread from Hong Kong-style bakeries. I set out to write notes about how roasted peppers balanced all that sweet fatty goodness, about how, rather than the typical broccoli rabe, the greens were the sort served alongside bowls of wontons a few blocks away in Chinatown noodle shops, but before I could dig into my bag for a pen, the sandwich magically disappeared into my belly. Poof, gone! Ai ya! Mamma mia! The mozzarella sticks, crisp but with a chew that goes on for miles, didn't last much longer.

The quality of this food wasn't surprising. I happened to have dinner at Torrisi a few weeks ago and the cooking is off the charts. But, more intriguing, I noticed that this was an Italian restaurant that serves no actual food from Italy: no imported prosciutto, no imported pasta, no imported cheese -- none of the signifiers of "authenticity" that most "serious" Italian restaurants pride themselves on. Rather, the pasta came from a nearby pasta maker, opened 100 years ago to serve Italian immigrants. The curds for that superb house-made mozzarella come from Polly-O, the string-cheese people, whose roots are in a small Brooklyn storefront. And, most excitingly, the dried scallop garnish for its sautéed broccoli rabe came from Chinatown, one neighborhood over and half a world's cuisine away.

It was a pairing that tasted utterly natural, the scallop's dense ocean flavor weaving around the sweet bitterness of the greens. It was a combination that spoke of a conversation between cultures that rub up against one another in a country and a city of immigrants. For all our fashionable talk of locavorism, here, finally, was an interpretation of "eating locally" that's not just about how far your food travels, but about community. It's about getting to know your neighbors and their flavors and finding the ways that you can come together.

Cuisines taken by emigrants to new lands have always changed to adapt to the ingredients available to them, giving us such odd and delicious dishes as shrimp stir-fried with rum, a classic of Chinese Caribbeans made possible by the fact that the traditional rice wine was nowhere to be found in rum-producing Trinidad a hundred years ago. But with the ease of importing ingredients today, those naturally evolved cuisines may be a thing of the past; I mean, if you're cooking to remind you of home when you feel very far away, you're going to reach for a bottle of real rice wine if you can get your hands on it.

That seems leave us, then, with cuisines that will either be slavish devotees to an "authentic" past, or the chef-driven, inflated-ego fusion food of the '90s. Excited by the world but ungrounded in tradition, it was cool back then to just throw Mexican molé with Japanese wasabi, smother a chicken breast in it and serve it on a Caesar salad. Easy to come across exotic flavor but hard to come across coherence; it was the stuff of fad, not evolution.

I thought about all this as I chewed on Torrisi's custard cream puff, whose filling is a dead ringer for the eggy custard tarts that I eat in Chinese bakeries. The difference here is not just that the food tastes fantastic, but that it tastes seamless. Growing up with my parents working in Chinatown, I roamed the streets of Little Italy by day and sat down to Chinese food at night; this is the food that reflects that life, made by a couple of Italian guys frying mozzarella in a wok.

When one of the cooks showed me the thin, curved pan, I asked, "So does using the wok instead of a regular fryer add something to the dish, or is it philosophical in nature?"

"Well," he said, "one thing is that this way we can change the oil frequently; it would get expensive to have to change out five gallons of olive oil at a time. But we really just wanted to show people what we're doing: Chinese Italian food." Chinese Italian food that can only happen in America.

I left their stand and jostled my way some more among the crowd. Down the street, I came across decidedly more straight-up Italian food. A stand was doing pizza in the Neapolitan style -- soft and runny in the middle, puffy, just slightly crisped around the edges. The pizzaiolo working the oven spun the pies with his peel, smacking it against the oven floor in sharp motions to stoke the fire. He worked quickly, smoothly, expertly, and the pies came out beautifully, with the perfect amount of black-specked char on the bottom, just like in Naples. He turned around to set the steaming pizza on the counter, and the woman taking orders called him "Ming." He's Chinese.