This is what a modern trade war looks like: Do what we say, or the hybrid car gets hurt 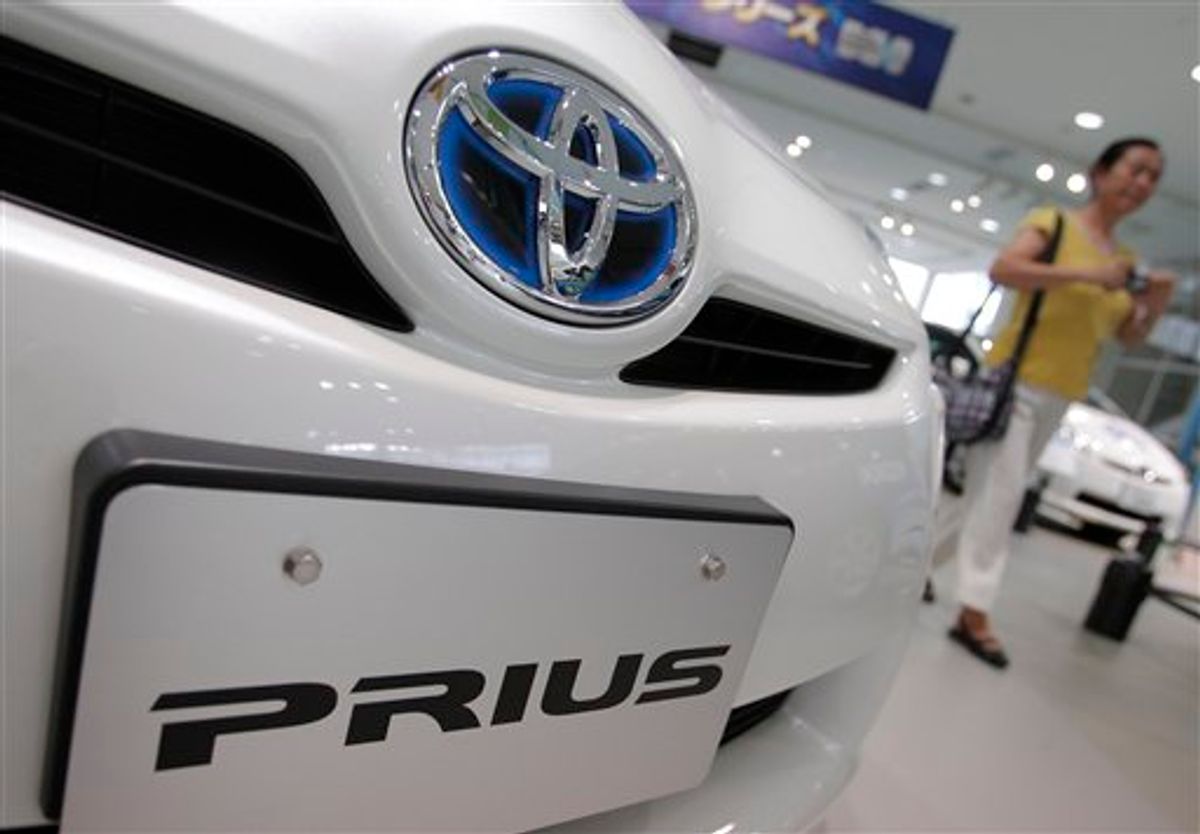 File - In this July 6, 2010 file photo, Prius hybrid vehicles are displayed at Toyota Motor Corp.'s showroom in Tokyo. Toyota's Prius is becoming a little less quiet with a new electronic humming device that is the automaker's answer to complaints that pedestrians can't hear the top-selling car approaching. The 12,600 yen ($148) speaker system that goes under the hood of the third-generation Prius sets off a whirring sound designed to be about the same noise level as a regular car engine so that it isn't annoying, Toyota said Tuesday, Aug. 24, 2010. (AP Photo/Itsuo Inouye, File) (AP)
--

Never mind all those panda-semen-extraction-gone-wrong conspiracy theories. If the New York Times' ace China correspondent Keith Bradsher is to be believed, China has has halted exports of rare earth elements to Japan, in protest of its neighbor's detention of a Chinese fishing boat captain.

A spokesman for China's Ministry of Foreign Trade and Economics is denying that any such trade embargo exists, but Bradsher's article makes a convincing case that some kind of message has come down from on high to restrict the flow of minerals. Regular readers of HTWW will understand the significance of the move. Rare earth elements play an extraordinarily important role in the high tech, clean energy economy -- as well as advanced military technology such as missile guidance systems.

The Prius, for example, depends heavily on the rare earth elements neodymium and lanthanum. Last year Reuters reported that each Prius motor "requires 1 kilogram (2.2 lb) of neodymium, and each battery uses 10 to 15 kg (22-33 lb) of lanthanum." China controls 90 percent of the production and processing of neodymium.

Japan, Bradsher writes, is sensitive to blockades of key industrial resources, harking back to the U.S. oil embargo that played such a critical role in Japan's decision to attack Pearl Harbor. But the U.S. is also bound to pay close attention. At a time when the U.S. government is stepping up criticism of China for artificially depressing the value of the yuan, and concern about how the country may be flouting international trade rules to grab market share for its solar panel and windmill industries is growing, the indication that China is prepared to use its rare earth dominance as a diplomatic club is alarming. The panda is throwing its weight around.