Forget the tea party, what about the crumpets? 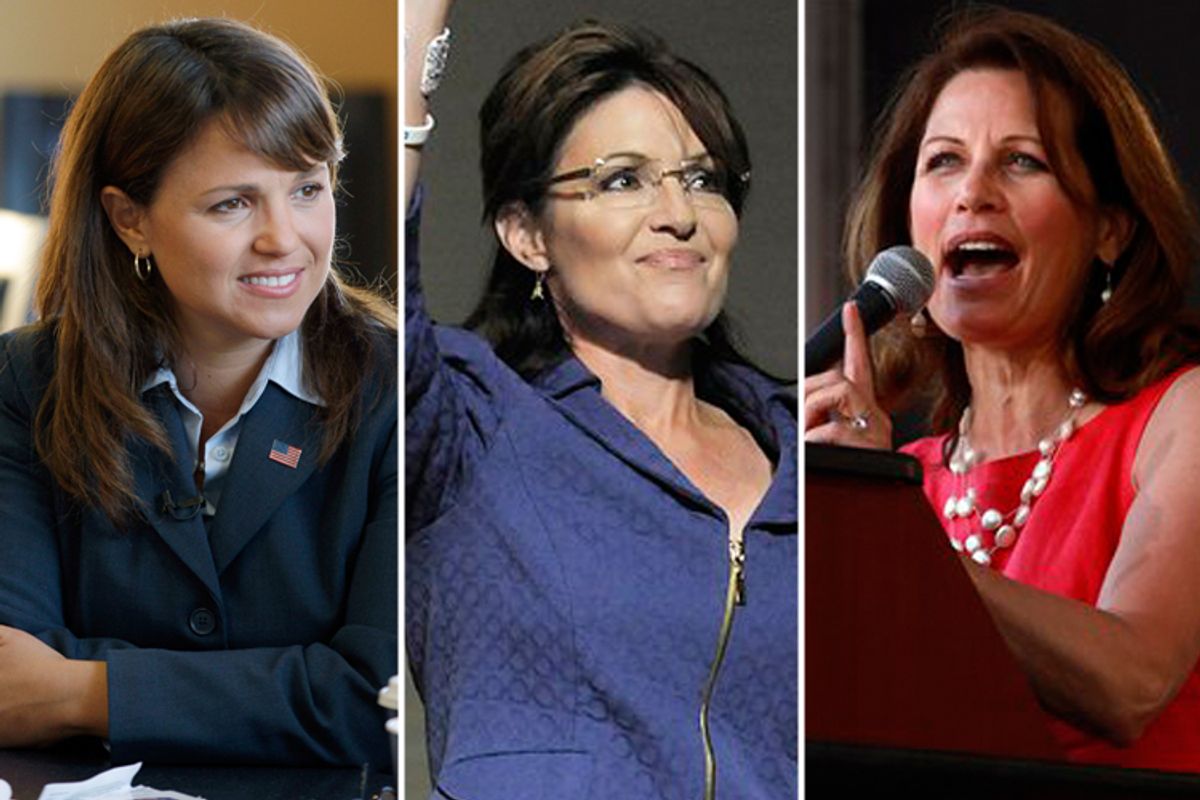 To the connoisseur of American political theater, the most entertaining aspect of the 2010 election season has been the rise of the right-wing cuties -- political celebrities whose main qualification is looking terrific on television. From where I sit, in a comfortable chair in front of the tube, the GOP Cupcake Factor has enlivened an otherwise dreary campaign season.

To put it another way: If you don't love Christine O'Donnell, you don't love America. The Republican Senate nominee from Delaware exemplifies a basic truth about politics in the age of cable television: An attractive woman with a glib demeanor and a telegenic smile almost can't be too crazy.

Everybody knows some poor fool who married a woman like that. Other women befriend them, because they tell such interesting stories. After the stories turn out to be big lies, people usually tiptoe away. On television, however, that's never necessary.

A man who'd made half the screwball pronouncements O'Donnell's emitted in her career as a talk show guest -- virtually the only job she's ever had -- would be seen as dangerously unhinged (unless his name was Newt Gingrich, an obvious exception). Outside Delaware, O'Donnell appears destined to be seen mainly as a TV performer, like Sarah Palin and the third member of the Republican cute caucus, Minnesota Rep. Michele Bachmann.

Trends always come in threes; it's one of the rules.

Although Bachmann actually holds elective office, an impediment to celebrity of the kind Palin's innovative career demonstrates, she's a Republican from a safe district. Hence she needn't actually do anything, merely find attention-getting ways of denouncing President Obama, distracting them with dogma and dazzling them with her beauty.

Bachmann also differs from Palin and her Delaware understudy in that her crazy comes in paragraphs instead of sound bites. She was in classic form at the "Values Voter Summit," totally misconstruing a long-ago remark Obama made about "negative" constitutional rights -- which she described as "infantilism," as if the president wanted to take them away.

Of course, what legal scholars call "negative rights" are those the government can't take away, such as free speech, religious worship and our precious firearms. Obama wasn't criticizing the Constitution, merely talking like the law professor he used to be.

Characteristically, Bachmann's point is almost as obscure as it is absurd. Even so, as no less an authority than Bill Clinton recently pointed out, "She's very attractive in saying all these things she says, but (they're) pretty stupid."

That's the essence of the thing. From the Republican point of view, the beauty of the Cupcake Factor is that it confounds liberal pieties, imagined and real. Sure it was dumb of the McCain campaign to think women voters angered by the naked misogyny directed at Hillary Clinton during the 2008 Democratic primaries (MSNBC pundit Mike Barnicle compared her to "everyone's first wife standing outside of probate court") would flock to Sarah Palin.

But they did make her a TV star. The former Alaska governor's whole act is a calculated affront to Democratic "feminist" sensibilities. (It's essentially a meaningless term, signifying something different to everybody who uses it.) The high-sheen lip gloss, the "Naughty Monkey" brand red pumps, the black leather outfits, the winking, for heaven's sake. She's the original "Mean Girl" -- the head honcho of Orwell's "Junior Anti-Sex League" dressed to kill.

You want her, but you can't have her. ("You" in the generic sense, that is. I'm personally immune to Palin's charms.)

Not so, however, Time's political pundit Mark Halperin, who recently rhapsodized about Palin's commercial "genius." "Palin," he explained, "is operating on a different plane, hovering higher than a mere celebrity, more buoyant than an average politician."

Yes, but a political celebrity in the age of Fox News doesn't need a majority, only an enraptured minority. Everything about Palin -- her humble origins, disjointed syntax, wacky family, even her well-publicized shopping sprees and naked acquisitiveness -- make fans identify with her. Palin's prickly defensiveness is to them a virtue. So mock on, you over-educated elitists; she's laughing all the way to the bank.

Now comes Christine O'Donnell: Younger, warmer, likewise a charter member of the Junior Anti-Sex League (Roman Catholic Division). Alaska probably wouldn't be big enough for both of them. But Delaware's a long way off. Palin knows an ally when she sees one. She's advised O'Donnell to stick with Fox News, ignoring the "lamestream" media -- in effect conceding the election but building her personal brand.

Stardom beckons. Why O'Donnell would want to waste her time on something as pedestrian as the U.S. Senate I cannot imagine.