Live-tweeting about rape in Haiti 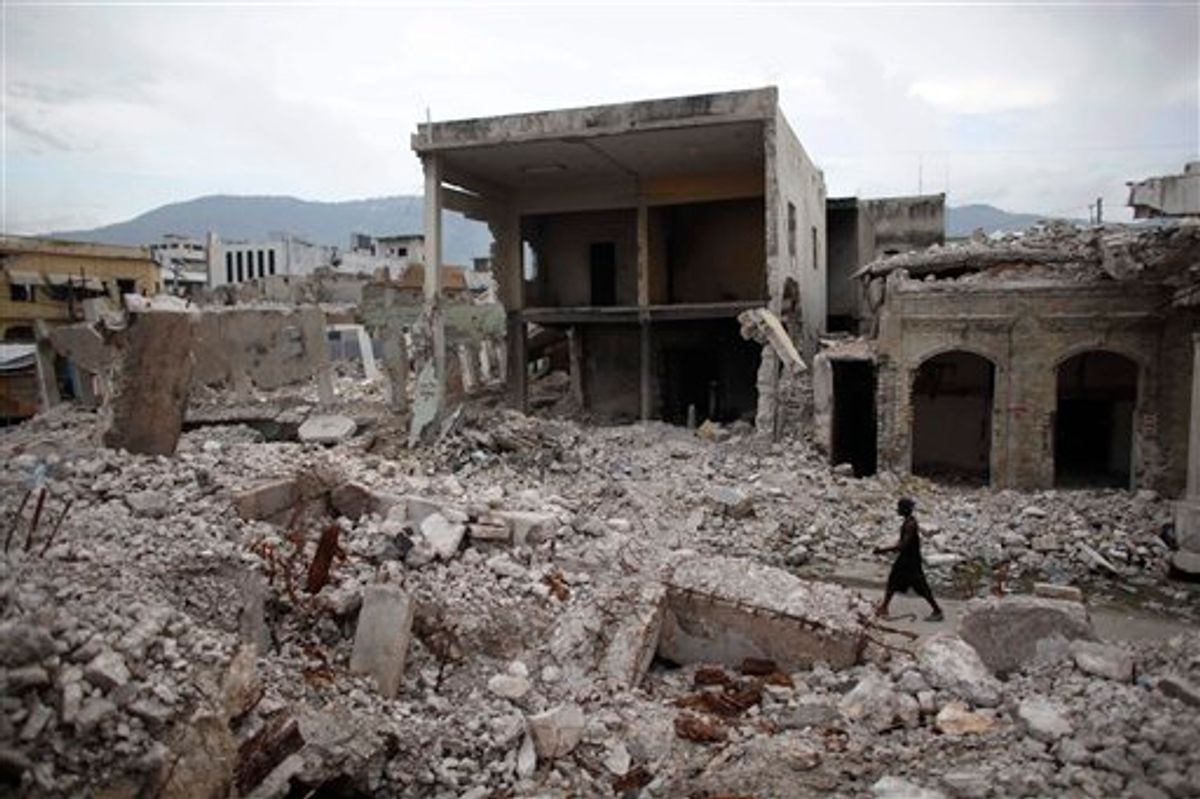 In this photo taken June 30, 2010, a man walks past debris and earthquake damaged buildings in downtown Port-au-Prince, Haiti. Six months after the devastating Jan. 12 earthquake, downtown Port-au-Prince, where much of the nation's industry and commerce was clustered and where about 80 percent of the buildings were destroyed, plans are in place to remake the entire area with the government pledging $100 million for reconstruction, but top government officials cannot say where the money will come from. (AP Photo/Alexandre Meneghini) (AP)
--

The tweet was blunt and to the point: "On my way to the hospital with a girl whose tongue was bitten off when she was raped." Later, another update: "So, they're gonna have to do tongue reshaping, rather than reattachment, because the guy who bit it off swallowed it." That is just a sample of Mother Jones reporter Mac McClelland's stream of brutal live-tweets from on-the-ground in Haiti. She also told of the way a doctor lectured the woman about how it was "her fault she got raped bc she's a slut and smokes pot." While stuck in traffic on the way back from the hospital, she tweeted in real-time: "[The woman] starts *screaming* when tall dude in blue strolls past us. That's one of the rapists."

There is no question the tweets are horrific -- but some people were offended not only by the awful reality they revealed but also the way the story was told. As the San Francisco Chronicle's Phil Bronstein reported, soon after McClelland detailed her experiences with the 24-year-old rape victim, concerned tweeters began raising some critical questions: Had her interview subject given informed consent? Wasn't she putting the woman in danger by using her real first name? Is Twitter an appropriate medium for talking about rape? Instead of engaging in the uninformed -- albeit philosophically interesting! -- speculation, I decided to give McClelland a call to hear her side of the story.

She says the rape victim (who I will not be naming here as a means of staying out of that particular debate) was explicitly told that she was speaking with a journalist. (Also, says McClelland, "there's really no confusion about who the white girl is with the Blackberry in one hand and a notebook in the other.") The woman had already appeared on local TV news and the source that put McClelland in contact with her said that the story "was already well known in the area." "My biggest concern was local exposure, which, as it turned out, she already had, and expanding that to the United States was not as much of a worry," she said. So, McClelland concluded that it was OK to use the woman's first name in her tweets, and now she's circling back to ensure that it is for the long-form magazine piece she's working on. That's the downside of live-tweeting: It's a journalistic high-wire act done without the safety net of rigorous fact-checking.

Quite separate from those concerns is that some of McClelland's detractors are perturbed by the medium in which the story was told. Jina Moore, a human rights reporter, argued that "Twitter is too ephemeral a tool for something as serious as rape." Akhila Kolisetty, a human rights blogger, wrote:

I also have doubts about whether using Twitter as the medium to report a rape story is ethical, or even simply the best medium for doing so. Twitter is good for disseminating information, but it’s not good at capturing the whole story or the complex context for a situation. When you’re talking about something like rape at refugee camps in Haiti, we need some more context. You can’t just jump into the story like that, and that's exactly what McClelland did. We need more information – what is the current and historical situation in Haiti, what are the conditions in refugee camps, what is being done to change this. Frankly, 140 characters isn’t enough for this story to be told appropriately, and respectfully.

McClelland, who tweeted recently about her own "rape nightmares" while there, didn't go to Haiti just to take to Twitter, though. She is a journalist on assignment and she says the reporting that showed up on her feed will be incorporated into "a narrative version of the story" with "a lot more context and details." Twitter was a "super fast" and "effective way of getting information across," she argues. McClelland took the same approach when she was on the ground in Louisiana covering, as she calls it, "the BP oil spill shit show." There were in-depth, well-crafted pieces, to be sure, but her tweets allowed readers to follow her as she reported those stories, share in her frustrations as she was railroaded by BP execs and drum up excitement for future reported installments.

Many of McClelland's critics seem as though they are upset with her for forcing this reality on them without fair warning. Indeed, these weren't abstract headlines along the lines of "Haitian women face rape epidemic." These were brief dispatches that efficiently communicated a heartwrenching truth, a truth that was happening at that very moment. You can't very easily turn away from someone who is telling you: I'm sitting next to a 24-year-old who is being scolded by a doctor for being gang raped and having her tongue bitten off. And the truth is that many people have turned away from the situation in Haiti, the U.S. focus has shifted elsewhere. In the end, McClelland says of her live-tweets, "Maybe some thousands of people outside Haiti thought about the fact that there is a serious rape crisis in these displacement camps. That's something they probably never thought about before and that's the point as far as I know of journalists going to places and reporting on things."